Not too long ago in advising an enterprise looking to develop mobile apps I was asked what download statistics are available on the respective Apple and Google Play app stores.  Here I am referring to the statistics seen from the app publisher’s perspective, which are not visible to the general public.  And in this context I am referring to apps downloaded via the Apple and Google app stores, not deployed via any device management platform.  At the same time, SAP Mentor Richard Hirsch recently posted an interesting blog analyzing the popularity and estimated download statistics of SAP’s own mobile apps.  So I decided it was an opportune time to share the statistics from one of my own published apps and give the community insights into what the respective mobile platform providers provide in statistical views (without purchasing third party analytics), and also to give insights into the SAP ecosystem itself.

For the purposes of this blog, I am sharing the statistics for a free app which I published a few years ago, myHelp for SAP Professionals.  This app is somewhat dated now, but for the purposes of this analysis it is useful because I had developed and published it separately for both the iOS and Android platforms and have several years of statistics accumulated.  At the time of writing, the app has recorded 24,255 iOS downloads (since Sep 2010), and 23,758 Android downloads (since June 2011).

An Android App for searching HELP.SAP.COM

iOS Developers access their download statistics by logging into the iOS Developer Center and accessing the iTunes Connect ‘Sales and Trends’ dashboard.  Note that alternatively Apple have made available an iOS App (of course) which displays similar views.  The screenshots below are those taken from the desktop (browser) version.

Daily / Weekly / Monthly / Yearly download statistics are available.  Below are some (not all) of those views …

– Notice the January spike (~900 installs) …. did people receive an iPhone for Xmas?

Breakdown by Market (statistics below are for the year 2011) 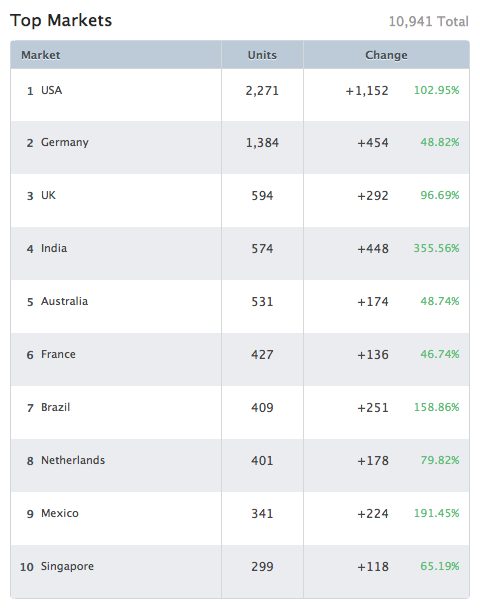 –  Note that one shortfall of the reporting here is that Apple accumulates totals at most for each full year.  Through these views it sadly does not provide cumulative totals across years.

–  Notice for iOS the dominance of the US market, followed by Germany and then the United Kingdom.  This gives an insight into the iOS market for the SAP ecosystem.

Android Developers access their download statistics via the Google Play Developer Console.  At the outset I must say that the reporting for Android Apps is much richer and superior than that provided by Apple for iOS.

Here are some (not all) sample views …

–  Note the steady trend line.  Without any active advertising, this Android app seems to have a steady download rate of ~ 50 downloads per day.

–  9416 Active Installs.  This is a humbling statistic.  You see, Google detects if someone uninstalls your app.  So Active Installs records the number of devices which still have your app installed.  Notice that more than 50% of devices which installed the app subsequently deleted it at some stage (clearly this app is not as useful as Angry Birds).  Although from this post I am thinking that ratio is not unusual. – Note the dominance of India here for this SAP-related Android App.  Contrast that with the statistics I showed earlier for iOS.  And also contrast that with the general statistics provided by Google for ‘All Apps in Business’ category where typically the US market would dominate.  I am wondering if in this case this points to the large SAP ecosystem in India. 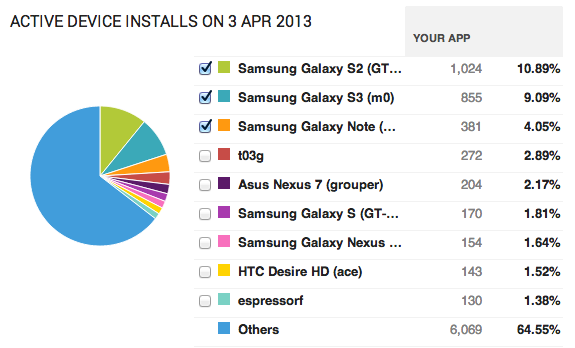 –  I feel the above statistics point to the fractured nature of the Android device market (which can be problematic from a developers perspective).  Notice the category ‘Others’ at 64.55% is significant, and that the greatest share by any one device is only 10.89%. 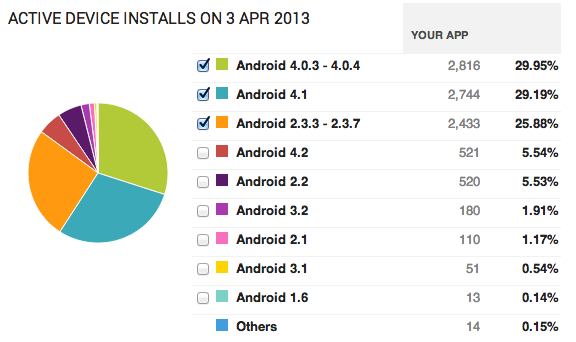 When comparing the various statistical views offered by Apple for iOS and Google for Android, the Google views are far superior.  I find it astounding that the Apple dashboards do not provide a cumulative total of downloads since the app was released (you need to manually view totals for each year, and summate them).

One interesting tool which Richard Hirsch used in his recent blog was XYO.net, which can provide an estimate of downloads for an app without having access to the actual download statistics.  Lets compare how well that tool performed in this instance …

Of course, Richard had no way to check the accuracy of that site.  But looking at the estimates generated by XYO.net for my own app, I would suggest it is far from reliable.

Interestingly, I didn’t actually expect myHelp for SAP Professionals to still be in the app stores in the year 2013.  When I first published it I had expected SAP to publish an official app within a few years, allowing me to retire my version.  Lets hope we see something from SAP soon …. please.