How popular are SAP’s mobile apps?

It is always a challenge tracking down the degree of market penetration for mobile apps.  Getting download counts directly from the app stores isn’t really possible so you have to use other means and tools to get the information.

To figure out the relative success in the marketplace of mobile apps created by SAP, I used a variety of data sources.

The obvious first choice was the SAP Store which also provides the download-count for mobile apps: 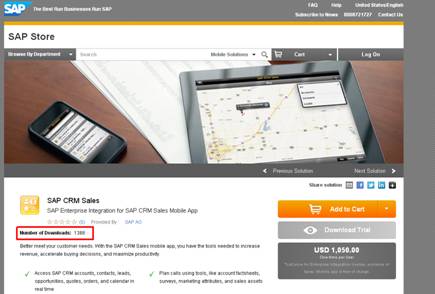 XYO.net is a site that provides additional details about app store statistics and provides some estimates regarding download counts.

Based on xyo.net’s estimates, what are the most popular mobile apps created by SAP AG?

I also looked at some of the statistics for selected mobile apps of competitors.

A quick note:  The longer an app has been on the market, the more downloads – even at a slower rate – are possible. Some of these applications, for example, that of NetSuite, have been on the app store for a while.

I also looked at some of the statistics for selected iPad apps of competitors.

AppAnnie focuses on the application ranking rather than trying to estimate the number of downloads. The site has excellent metrics and allows you to view trends and zoom down into the results in individual countries.

In my opinion, the most interesting data from AppAnnie are the historical ranking data.  The data is usually restricted to a particular app category.

Let’s take a deep dive into one app (SAP Timesheet) as an example.

Note: The rankings are just based on iTunes.

This diagram shows the all-time ranking for America. 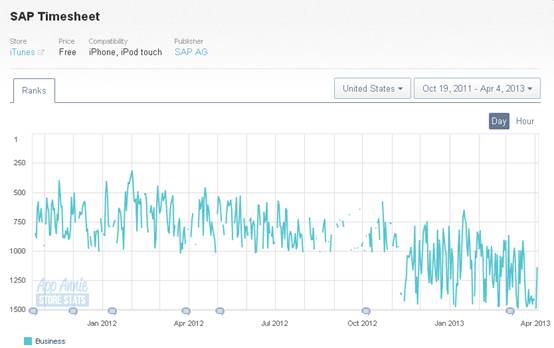 Here is the same metric for the same app for Germany. 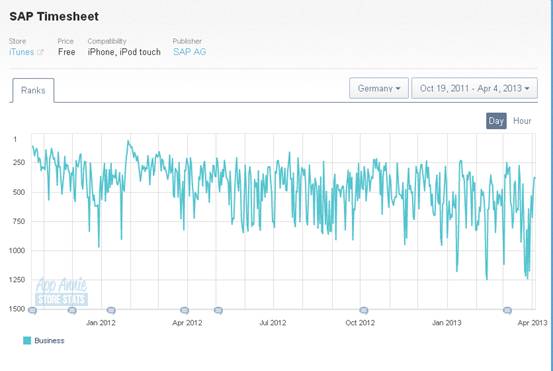 The application reached a higher ranking in Germany than in the US.

Note: AppAnnie has 89 mobile apps registered to SAP AG. I’m not going to show all their rankings in this blog.

Let’s take a look at few other mobile apps to get a better understanding of the underlying trends.

Here are the stats for SAP’s MyRunway in China which shows its popularity in the “Lifestyle” category. 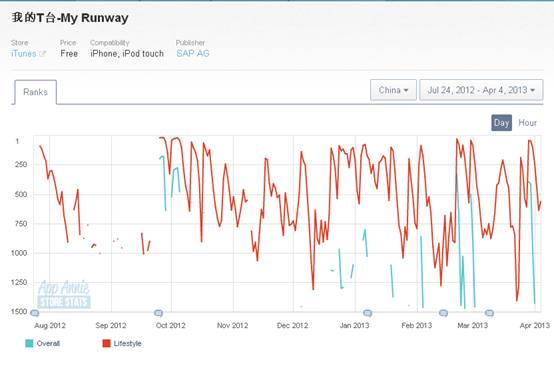 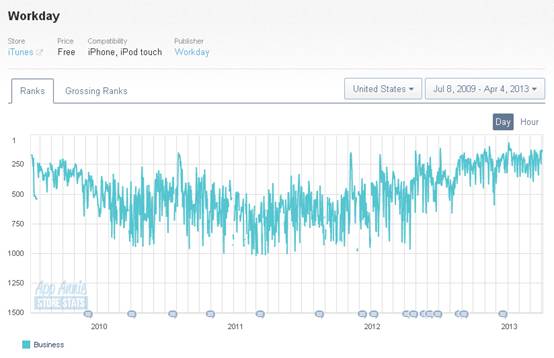 Note: It would be an interesting task to correlate this metric with certain events (for example, Workday’s recent IPO).

Here is the ranking for the NetSuite iPhone mobile app. 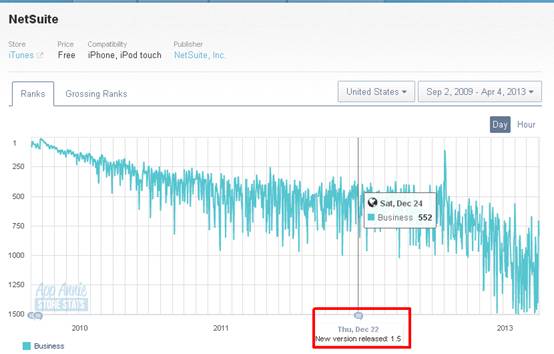 NetSuite’s mobile app has been around for a while and its decreasing ranking is one indication of how the mobile market has expanded since its release. The lack of updates (the last release was in December 2012) is bit strange though

I’ve just shown just a few metrics from AppAnnie. Readers should register on the site and explore the data themselves.

My initial goal of this blog was to get an indication of the relative popularity of SAP’s mobile apps. What I discovered was that individual business apps of other enterprise software vendors (Workday, Oracle, etc) are often more popular than those of SAP.  This can be seen in the AppAnnie rankings or the estimated downloads by xyo.net. However, a broader analysis over all mobile applications provides some interesting insights.

Note: The following graphs were based on the estimates in xyo.net and combine the data from the iPad and iPhone mobile applications.

The quantity of SAP mobile applications on iTunes is the most interesting trend.  No other large enterprise vendor provides such a wide variety of mobile applications. Oracle still has more total downloads (estimated) but many of these downloads are associated with its database offerings rather than its business applications. The estimated downloads in 02/2013 also demonstrate that SAP is moving ahead in this area.

Some might say that it isn’t fair comparing Workday – with its focus on HCM – with SAP with its much broader industry focus. Yet, exactly this broad industry foundation provides SAP an advantage by focusing on higher volume – lower download counts but spread over more applications.

My charts also reflect a moment in time rather than show the associated trends. It would be worthwhile to revisit these metrics in six months to discover what changes.  I’m assuming that the number of provided apps will increase exponentially as the mobile-related experience of SAP’s internal developers increase and the associated development tools improve.