Gartner BPM Conference – will never be the same – day two

Yesterday, I said and did this: Gartner BPM Conference – will never be the same – day one

Today, I spent time on the “show floor”, attended more sessions, and had an analyst “one-on-one” session. I almost missed that session, as it did not show up on my agenda on the Android app.  That’s similar to what happens at ASUG/Sapphire with various one-off meetings such as Community Lounges, executive meetings and other non mainstream sessions. I needed to look for the mail confirmation to find it.  Fortunately, I also received an email notification at 15 minutes before the scheduled time, though if I had been heads down in a one-hour session I may have completely missed it. 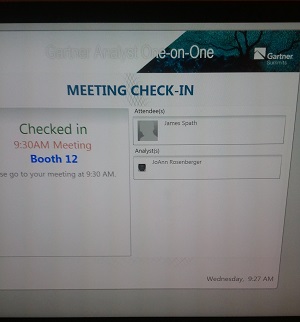 The check-in was dead simple – hold your badge up to a scanner. No paper schedules, no line, no sweat. Finding “booth 12” required asking for directions (and you know the myth about guys and directions); as it turned out, there was no booth, only a small round table.

I’ll leave out the Q&A for that session, and pass it on to my management.  As might be expected, I didn’t get answers to all my questions, though I did get good pointers on followup research.

Session – Getting More Value From SharePoint

Since we use SharePoint, I picked this session to get a pulse on how others deploy it, what works, what doesn’t, and what’s coming. The speaker (Mark Gilbert) was excellent, knew his stuff, and had several trends to share. The size of data and hardware beneath a few landscapes generated a few tweets when I mentioned a 40 terabyte system.

Hearing about issues of repository replication was useful to me, as the growth of more and more systems, getting larger and larger, is where users tend to see performance and use problems.  The suggestion of hedging your bets by putting content into several different versions makes limited sense; going to third parties to manage data has inherent risks, but as Microsoft doesn’t handle this, you have few options.

In Social Networking, Microsoft’s acquisition of Yammer sets up a situation similar to their absorption of Visio years ago.  It doesn’t fit the Office suite exactly well, though it’s getting better, and there’s always the next upgrade to consider.

How does this fit with BPM? It seems there’s a niche for SharePoint, positioned between an ERP system that has much structured data, and basic unstructured file repositories. You would not suck every legal document into ECC, nor would you necessarily put it into SharePoint, but the latter is better positioned to interact with email, documents and spreadsheets than the former.

I visited a few booths at lunch, chatting with fellow SAP Mentor Peter McNulty.  This shot is fuzzy, but I used the front camera lens rather than trying a blind trick shot. 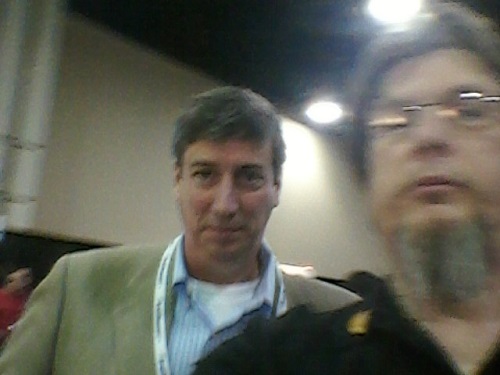 This session did not live up to my expectations.  I had stopped at the MS booth to learn a bit about the connection between Visio and BPM, and gleaned a lot in a few minutes on the improvements from prior versions in exposing live data from back end systems into drawings. For me, that might be the amount of storage space used by different teams on different file systems.  For others, that might be operational data such as stock levels, project completion, etc.  This was covered in slides during the presentation (while the booth demo was working software).

The implication was Visio was better for light weight process control, which was an honest admission by the presenter (Chris Crane). I think it will have uses, but it looks like I’ll need to get an upgrade, or go to the cloud version (shudder).

Unfortunately, the remainder of the presentation until Q&A was from a partner, and I not only struggled to see the slides, I failed to hear anything related to Visio during his portion.  If I had known that was going to happen, I would have ducked out for another topic.

The Q&A redeemed the session a bit, though the speaker was blunt about what were best practices and what was simply a bad idea (“load a million rows into a Viso drawing via a data connection – no don’t do that”),  The suggestion of copying data from SQL Server to a spreadsheet before connecting that to Visio was odd, until one considers the data security might prevent other users seeing what you see.  More work, so you’d need to consider this solution carefully.

BPM? Well, I know Visio is used extensively.  It’s cheaper than other flow chart solutions.  Does it walk and talk the BPMN code language?  I’m not certain it can do it all, though I think doing most of the work is much better than doing little of it. 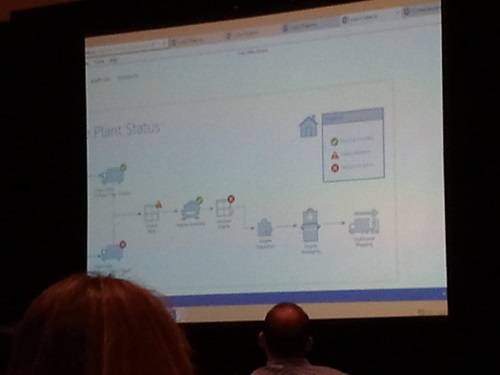 The Ottawa Hospital was chosen to talk about how they applied BPM techniques to patient care. Seems a bit dehumanizing, so they substituted “Care” for the “Business”, and Cameron Keyes spoke about CPM rather than BPM. It was a compelling story, starting small, and building up to larger projects, in a short period of time, relatively.  They used mobile devices early (and well), they gathered lots of data, and iterated through changes.

One metric which generated a need for “fixes” was projections of the date when patients would be ready for discharge. Certainly they and their families want them out of care quickly, not to mention staff (and insurers), though clinicians wanted to ensure patient health over a basic numbers game (I’m paraphrasing and oversimplifying). An interesting chart shown was the amount of time under or over the estimates given. It looked like a Bell curve, except for minor aberrations.

The answer they came up with for the next phase was to postpone estimating a discharge date until patients were “medically stable”. Seems clear in hindsight, but that’s the kind of process improvement that must occur if something is built quickly (otherwise it’s not in production and just costs more and more), and is flexible enough to be revised easily.

The speaker answered a question about mobile devices with a flat statement that this project would not have worked without it. 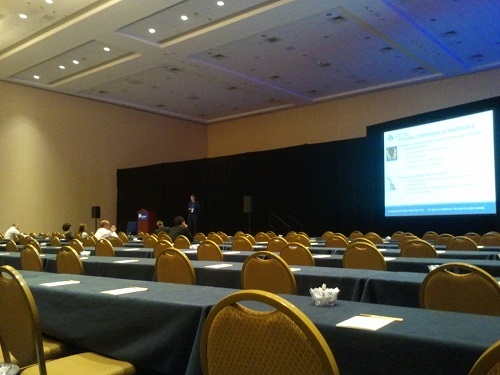 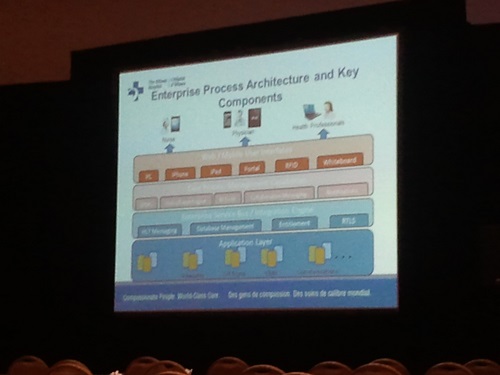 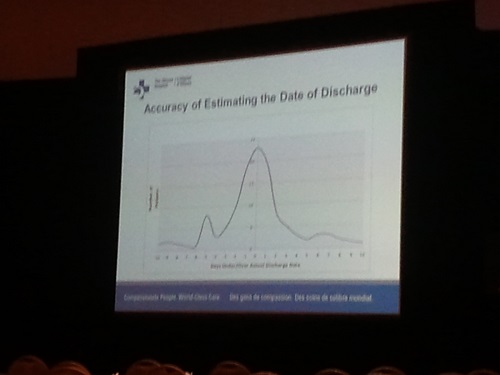 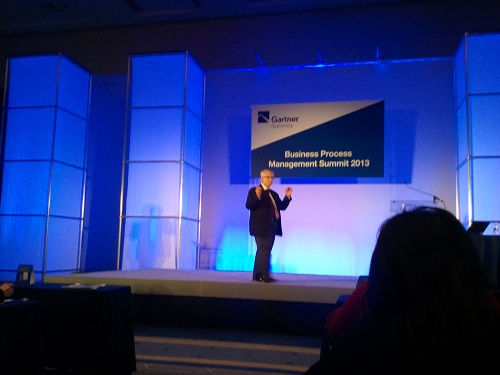 Jim Sinur talked about maverick thinking. His main theme was how machine intelligence will be altering the way things are done, which I believe, and that putting controls into place, is mandatory, which I certainly agree with.  He’s extrapolating from current data, as a good analyst should. Yet, there are many ways the future could be shaped. He left out pressing issues such as climate change, energy shortfalls, and continued population growth in many parts of the world, unfortunately, narrowly focusing on what good technology can bring. rather than the side effects is may also cause.

Session – To The Point: Business Process Analysis: Pictures or Decisioning? I stuck it out for one last 30 minute session at the end of the day. The theme was intended to challenge process modelers to produce something that works, rather than something that is pretty and may end up as wallpaper.

David Norton also had a lot of great stories, throwing in logistics and OODA loops, along with BPM maturity levels, software license models (cloud?) and “technical stuff.”  I’ve blotted out the Harvey Balls on the above shot, as I’m not sure I’m allowed to reproduce it.  Stay tuned for the Gartner “Market Scope” review of the purveyors of BPA and BPM tools.

One more half day.