SAP BPC 10 has been in general release since April 23rd 2012, and from my project experience it appears well received. In this particular blog, I won’t focus on singing the praises of SAP BPC 10, so will avoid mentioning the greatly improved navigation, the smart administration console and perhaps most impressive, the easy to use and powerful EPM reporting tool.  Well, not again.  Instead I’m going to wax lyrical about one of SAP BPC 10’s newest features – time dependent hierarchies.

On the 6th February this year, SAP released a note informing those interested that SAP BPC 10 now allows you hold time dependent hierarchies.  A few quick changes to the back end of your system and you are ready to go.  There are two reasons why I believe this is blog worthy.  Firstly, because it’s new; and because it’s new there isn’t a great deal of information or example floating around the web.  Secondly, and the real reason I was stimulated to write this blog, is because it’s absolutely marvelous.

The business requirements for this functionality are numerous.  For a detailed review, read Muthu Ranganathan’s blog – Time dependent hierarchy with BPC10 NW – Planning and Consolidations Use cases. To summarise, this new functionality facilitates:

Regardless of the scenario, time dependent hierarchies allow quick evaluation of future scenarios and accurate review of historical data in its correct context.  This  should also prevent the need to create additional hierarchies to accommodate historical master data changes which slow down performance and are trickier to maintain.

Some aspects of the greater SAP landscape do not facilitate immediate usability and require a certain amount of training or understanding to use.  This is not the case with this latest feature.  This latest feature (and the note that came with it) is splendidly ergonomic.  The time dependant hierarchies functionality in SAP BPC 10 is easy to set up, easy to maintain and adds a tremendous amount of value to an existing or new solutions (I did warn I’d wax lyrical).

The installation requirements are straight forward enough and I will spare you the pain of going into those in detail.  Once this has been done, the first thing you’ll need to do is decide which dimension (or dimensions; though you are unable to apply this to time, which I find odd) you require time dependent hierarchies for. Now, this is where it starts to get good, and when I say good, I mean easy, and when I say easy, I mean tick a box easy.  To change your dimension’s hierarchies to time dependent you just tick a box in the dimension structure. 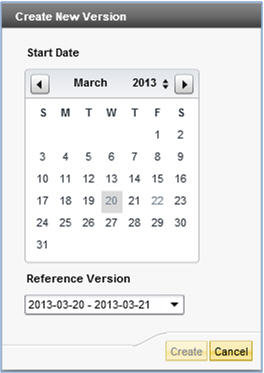 You are then in the position to alter your hierarchy until it is correct for the time period selected.  Interestingly, you can only create or delete time dependent hierarchies in hierarchy mode, but you can edit them in list mode (perhaps not that interesting).  Once you have made your changes, reprocess the dimension and you’re done.

Ultimately this is where this additional feature adds its real value.  Here you are able to view numbers in a historical or future context.  There is a new feature that allows you to choose what is called the ‘key date’ or the date for which you would like to view the hierarchy. In the below case, I have select this time last year to see how my entity structure looked, but with this year’s numbers (and before you speculate these are random numbers).

Now, by changing the key date to six months from today, I can now see that Asia Pacific is captured within the Americas region affecting the nature of the report.

This works equally well with other dimensions and also allows you apply different key dates to different reports so you can compare them alongside each other.

Although not a ground breaking new feature as such, I’ve explained and demonstrated how straight forward the time dependent hierarchy functionality is in SAP BPC 10.  There are some other points not mentioned here, for example there is the availability of using a data manager package to copy versions, which can be found in the released note.  I believe, however, that even in this short blog, it is clear that this is a really sound improvement to SAP BPC 10.  Also, this opens up additional scenarios where SAP BPC 10 is an option for those who felt this was an insurmountable restriction previously.  I look forward to testing this functionality within a full SAP BPC 10 implementation and in particular seeing the benefits it will bring the business as usual process.

I'd say it's a top feature when doing HR planning, the whole thing is "heavily time dependent".

Absolutely, especially when dealing with promotions or departmental restructures.

How do we change current date with out going to edit report /context.  Bcz key date is not exactlywork like a dimension. We can not get this key date using EPMDimensionList.

I have scenario, where user want to compare CY vs previous year.
Hier will change every year. Since it supports to create 2 different reports
with 2 different key dates we can achieve this report.

But user does not know how to go change report to change key date in second report. User will just select 2 different time periods from Excel cells by double clicking ( using EPMContextMember). One date has to reflect CY report key date and other date has to reflect prv year keydate.

Is there any EPM function to change key date dynamically?

I'll let you know if I come across a more dynamic way of altering either report.

Could you provide the SAP note number you reference in your blog, please?

From the note you mentioned looks like THJ (temporal hierarchy join) is not available 🙁 only key date, is this confirmed?

Apart from setting the valid-from and valid-to dates for the Entity hierarchy members, can you also (in list view) change any property member of a particular Entity, so that each property member change can be saved as a new valid-from date?

In that case we are able to setup a historical view of Entity attributes at the time of data submission.

As Richard Groot mentioned above  I would like to know if changing a member property will also be time dependant based on the new valid date?

is there any possibility of handling  time dependent master data in bpc?

Thanks Chris - this is an amazing and often-overlooked aspect of BPC. Many people (myself included) had previously been advising that BPC Standard does not support time-dependent hierarchies, and this post clearly shows how this can indeed be achieved. Nice one!