Gartner BPM Conference – will never be the same – day one

Though I’m primarily on the “technical side” of IT, it doesn’t hurt to get better with the other side, so after several missed chances to attend the Gartner BPM conference, this year I’ve managed to get here.  It will never be the same. What follows are random thoughts on the conference, including the registration and agenda process, some networking, and a bit about business process management.  Since Gartner’s analyses are proprietary, I’ll be cautious about sharing anything from the famous magic quadrants.

Pre-conference registration was easier than most SAP events I’ve been to, though with fewer than 1,000 attendees, comparing the experience to those where over 10,000 attend isn’t totally fair. As I’m local, I didn’t need to deal with travel and lodging. I entered various personal profile details (industry sector, etc.), and was off to the races. The confirmation emails suggested an app for Android and iPad; with both in my tool kit I decided to go with the former on my phone. Installation was pretty easy.

The online agenda builder was not too hard to navigate, given I’ve used probably a dozen versions of similar tools over the years for ASUG, Oracle, and SAP events. Like SAP Tech-Ed hands-on sessions, one had to reserve attendance at analyst or round table meetings. These were partly full by the time I go to the agenda, and confirmation was a bit disjointed (but only took a few minutes).  Export to an email calendar was more challenging, with each of my session appointments appended into a single file.  Eventually I got MS Exchange to import these to my enterprise calendar.  Adding a session later left me with a dilemma – would importing the schedule again cause double booking? I could not find a single “save to calendar” button, so I gave up.

The Android agenda tool had high spots and low spots. On the high side, viewing the overall schedule, specific events, and speakers was quite smooth.  Adding items to the agenda was also dead simple – click the gray plus sign, and it turns into a green check mark. The icons showing “Registration required” or “Registered” are clear enough, given the small real estate dedicated.

The filter button resembles a sound board slider panel. What I was looking for was the filter to “show only my agenda”; it’s not there, nor anywhere else I looked on the app. I gave up and just looked for the green checks.  Other low spots on the app were more than one crash (see Part One below), frequent log-outs, and a “Who’s Here” roster that only included speakers or analysts.  It would have been nice to see other attendees listed somewhere.  Oh well, probably a privacy concern.

The lowest spot was my attempt to “tweet” from the app. The first session I tried this with overflowed the message buffer by 119 characters, and there was no way to edit the text! The second attempt, with text that fit, led to a series of authentication attempts. I received two different multi-digit codes, but no place to enter them. After the endearing but unhelpful message “Oh dear, something has gone awry” and another fault, I gave up.  There’s probably a way to make this work simply. I would hope.

Enough preamble, on to the sessions, starting with the keynote.

My mistake was reading the slides on the keynote beforehand, so many of the punch lines lost their impact. Overall, the theme was “Change is about politics, not right and wrong”.  I stand by my tweet:

Highlights from the keynote:

The weirdest part of the day had to be me looking at the iPad of the person sitting next to me at the keynote, where my Twitter bio was displayed. As it turns out, Mike Gotta, Gartner analyst of enterprise social software and moderator of the next session, was sitting next to me. I said “hey, that’s me” and we shook hands. I didn’t know at the time who he was.  Now, I’m following @MikeGotta.

We went around the table, introducing ourselves and which social media tools are within our respective networks. I was surprised to hear a few companies running Jive (though which version wasn’t clear). It’s one of the leaders; big companies like Oracle, IBM and Microsoft are on the map, but I didn’t see SAP.  Maybe I missed it.

We talked about Microsoft’s evolution, and the puzzling spot they are in with Yammer, Jabber, Lync, and I’m not sure what else.  I gotta do my own homework here, as SharePoint doesn’t have enough fire power for what it could do.  There was also a thread on security concerns, where photos uploaded to the work network ruffled feathers.  Virus and malware attacks have many vectors; I’d think it was the IT department’s job to get this to work. The normal answer seems to be that it’s easier to ban the behavior than enable it.

Other areas to look into (without giving away the Gartner views):

Session – Getting Started with Modeling, Analysis and Measurement

Have you heard about the restaurant opened by a chicken and a pig? I had, and I won’t spoil the punch line for you.  The speaker, David Norton, used these creatures in his talk, starting with getting most of the audience on their feet clucking and oinking. One story he told (and there were plenty of good ones) was the Canon company buying a suitcase to use as the target form factor for a portable copier.

I liked the example of a simulation model of a warehouse, available to a supervisor as a mobile app, that reveals whether loss of a single fork lift would hinder the work shift. Very real world, very focused app, though no references I saw.  Another good example was trying to use supermarket checker scanning speed as a quality metric, where customers might be happier to have the food handed over in an orderly fashion.

David spent time covering various tools, such as “Automated Business Process Discovery”, which can be run against, say, an SAP Enterprise system, to reverse engineer a process model based on the “as built” state of the software.

Peter McNulty (Peter McNulty ) spoke with John Cuomo on the intricacies of NetWeaver’s BPM tool suite. With analyst Sandy Kemsley sitting 2 rows behind me at the session, I defer to the expert.  Read her post:

Her tip after the session was to check out “Disco” – fluxicon.com/disco/ (also follow @fluxiconlabs).

Session – To The Point: Shedding Light On Your Dark Processes for Profit and Compliance

To end the day, I sat in a 30 minute session with the intriguing title listed. Basic premise: “You can’t manage what you can’t see” – different than the other old saw – “you can’t improve what you can’t measure” but with a subtle difference. I was hoping to hear more specific examples of these hidden dangers. One that stuck out was blocking customers with specific cosmetic issues, assuming that not fixing the condition implied an inability to pay bills (I’m obfuscating a bit to keep this from veering off on a bizarre tangent).

Jim Sinur was an interesting speaker, with too much material for the time allotted.  He believes studying “dark processes” will grow with improvements in data mining.  I also worry about Big Brother. We shall see.

Firms to look into: 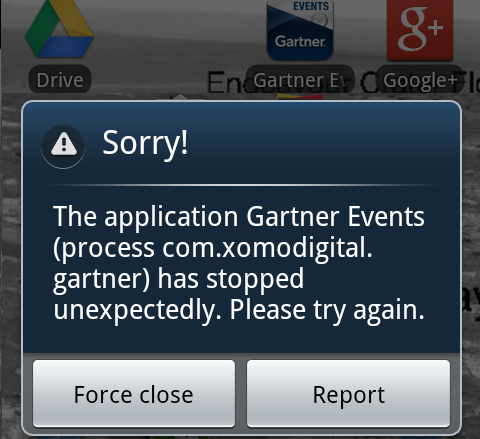 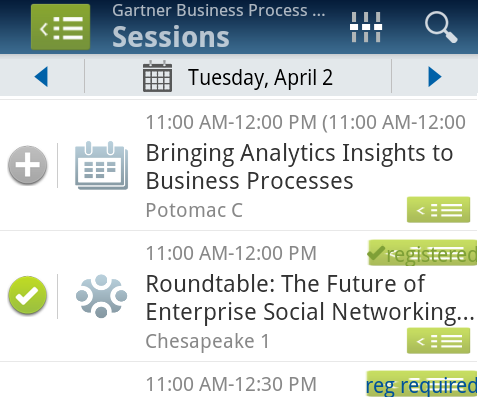 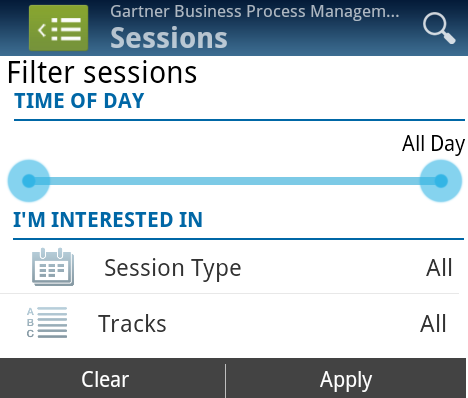 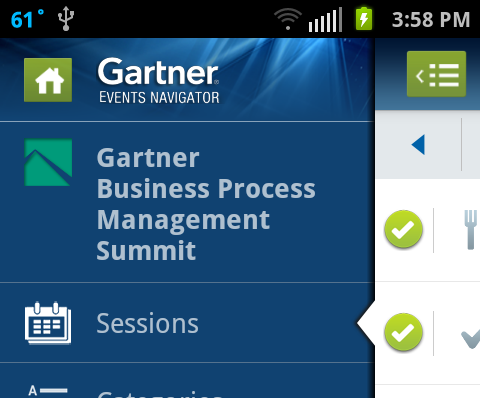 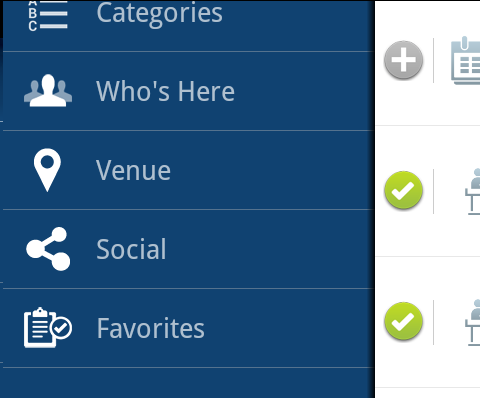 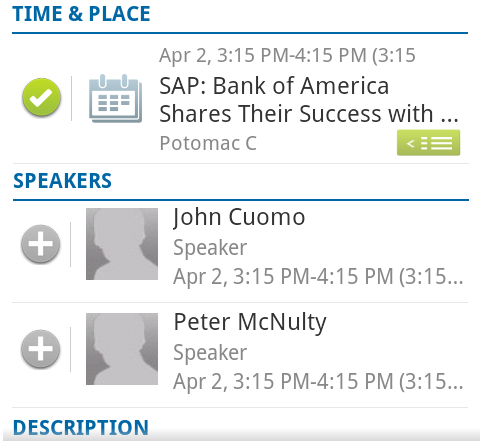 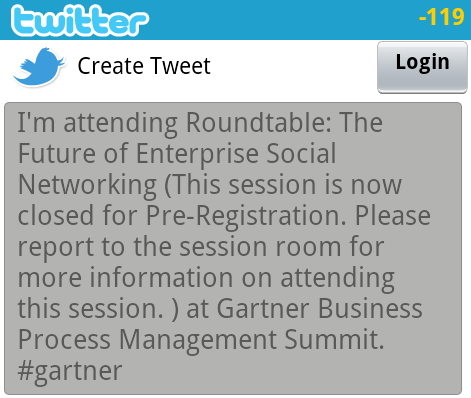 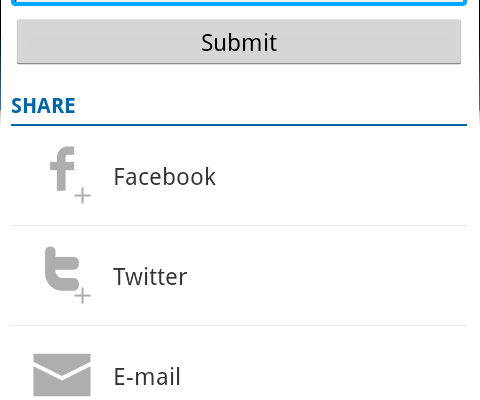 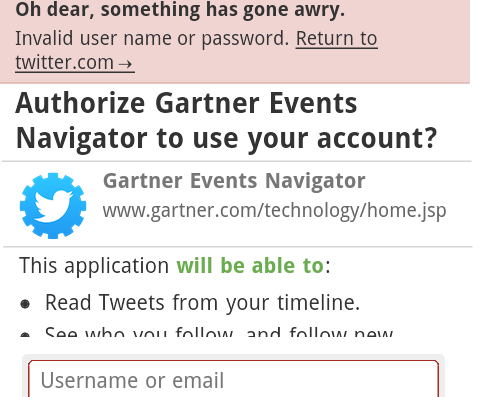 Great overview! Thanks so much for sharing.

Mariana Mihaylova - I still need to do one more "wrap" post.  It's always more difficult for me to write the last chapter, unless I take a day off.

Thanks Jim... some of us would love to go but those travel costs can be prohibitive. Sounds like a positive session on SAP NetWeaver BPM.  Dark processes are interesting...  maybe a good use case for Process Observer or Operational Process Intelligence? Something for me to think on anyway.

And btw thanks for the summary of conference app experiences.... yet another in the continuing saga of mobile apps and the simple things that can be all too easily overlooked... good life lessons for all of us designing for the world of multiple devices.