It is time that enterprise software married voice! 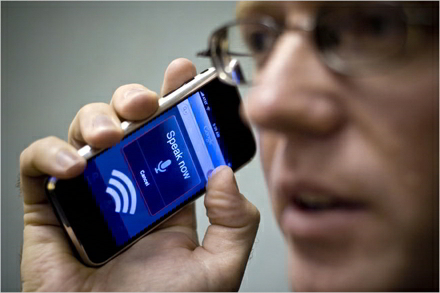 Mobile is no longer just another interface to enterprise software but becoming the default for most roles, including back office roles that are not desk bound, think warehousing. In fact other than analysts, I do not know who in the enterprise will have desk bound jobs in the future.

A major disruption of classic business processes and business roles are around the corner for classical businesses and their way of doing business due to the mobile revolution. Think, ecosystem of Apple developers who are also sales people for their applications as well. Think, a delivery truck driver could potentially up skill to a sales rep; they are already intimate with the customer and have an ongoing relationship via their route. A warehouse worker could potentially up skill to becoming a telesales professional.

All of the above becomes even more achievable once organizations realize the power of voice and voice based interaction systems working via a mobile device, think Siri on Apple devices. Siri like functionality offers a voice based command and control interface leaving the rest of the body free to undertake other relevant activities and freeing up all other sense except hearing and sight, as needed to look at information in case it cannot be said out aloud in a natural language construct by Siri.

Voice on mobile is one aspect of the future disruption that enterprise software needs to very quickly get on board with.