This document explains one of the issues of data packet processing that we faced in our project. Data packet shows the message and it is locked saying second attempt of data processing is successful and it remains active with yellow status with warning as shown below for data packet 20.

As you can see in the first screen shot below WBS element data load got stuck due to second attempt error and job remains active indefinitely unless we process this data load. 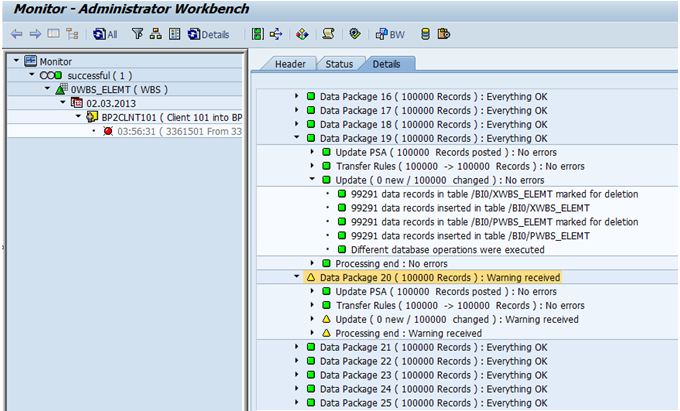 Before starting the below job there are few steps those needs to be followed.

Go to the data load request and set it’s QM status to red as shown in the first screen shot above.

Data packet processing should be set to be processed in the background.

Once this setting is done go to data packet and right click and select the manual update option. This option is only shown if data packet is in yellow status. Once you start manual further update following job will start with BI_BOOK* ID. You need to monitor this job in SM37 till it gets completed successfully.

Once this is completed successfully see to it that QM status for this request turns green overall. If not you can make it green manually. 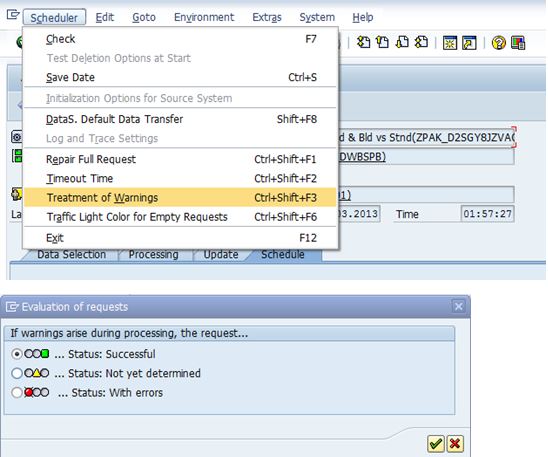 There are multiple reasons for this to happen.

· This can occur when doing massive parallel updating of time-dependant master data into the target characteristic. Solution is to reduce the number of Data Packets updating in parallel; effectively serializing the update by processing 1 Data Packet at a time.

· Treatment of such warning can be handled as this is occurring say in master data you can make the QM status green as shown above and further processing of process chain will not get affected due to this.

I've moved this to the BW space from the Data Warehousing space. Please post documents and discussions pertaining to BW in the BW space.

Nice Blog for the beginners. Basic information in the production support projects.

This option is useful when there are more than 1 data packet which got hung and we can process the hung data packets in Parallel with the help of this option.

Good note to be kept!

All Points are good ..Good Blog

Good note to be kept!