*For more information, check out Nic Smith’s Road to the Final Four – NCAA March Madness Basketball Analysis and my response and picks*

A colleague of mine said “as long as you’re within striking distance of No. 1 after opening weekend you’ve got a shot at winning the pool.”  I feel okay picking 10/16 Sweet Sixteen entries putting me only 20 points behind the SAP Data Geek Squad.  In my last post, I looked at Strength of Schedule (SOS) and Simple Rating System (SRS) to determine the teams who had the best chance at upsets.  So, how did I do? 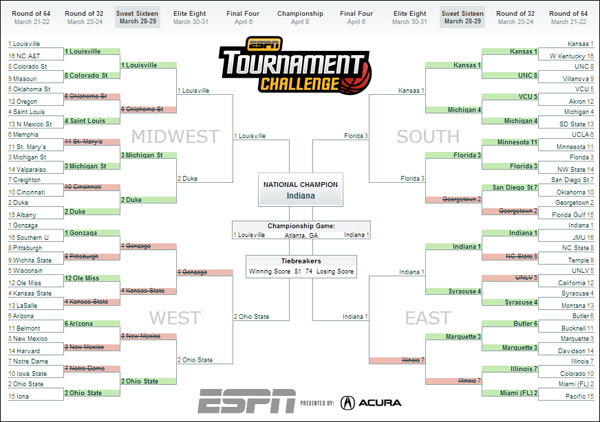 – St. Mary’s barely lost to Memphis which proved some validity in the data.

What Went Horribly Wrong Was Unexpected

– Illinois did not beat Miami despite leading by one late (and severely hurting my chances to win the office pool).  Free throws, kids.  Make them.

– Cincinnati lost to Creighton, and it didn’t even feel close.

– More chances to create a regression model like the guys at Harvard did.

What Do We Analyze Now?

I think the brains at Harvard had a good point in measuring turnovers and rebounding,  Basketball is a game of possessions, and essentially, the number of chances to score. Logic goes, the more chances your team has, the better your chances are at winning.

I’m looking at this one step up and measuring Defensive Efficiency (DE), or the number of points a team allows per 100 possessions.  I love this statistic, you’re not punishing teams who thrive on pace and running their opposition out of the gym.

Here’s how you can join in:

3.  Share your analysis with us at www.sap.com/datageek , and let the trash talk begin via twitter using #SAPVisi 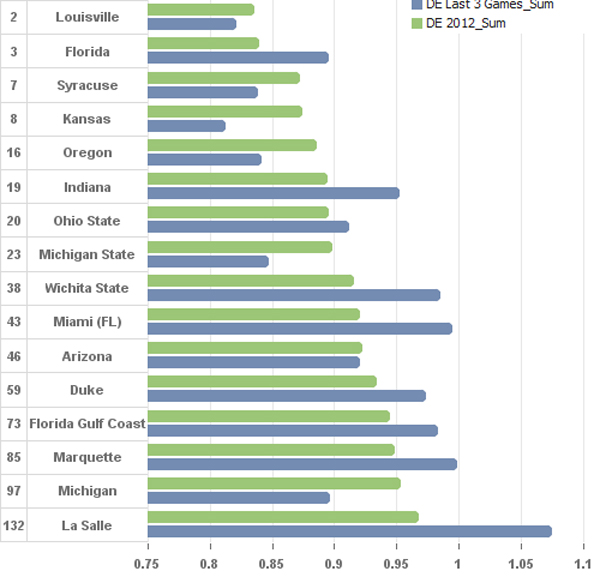 Louisville, Syracuse, Kansas, Oregon, Michigan State, and Michigan are allowing fewer possessions in the tournament compared to their 2012 games.  Not surprisingly they won their opening round games without too much trouble.  Four of the top five defensive teams play one another next round, and three of these teams are in the Midwest bracket.  Unbelievable.

When it Rains, it Pours

During the opening rounds it was amazing watching teams shoot their way back into games in the second half.  No lead was safe, every game was unpredictable (see Marquette).  For this round, I’m looking at each team’s ability to contest shots. 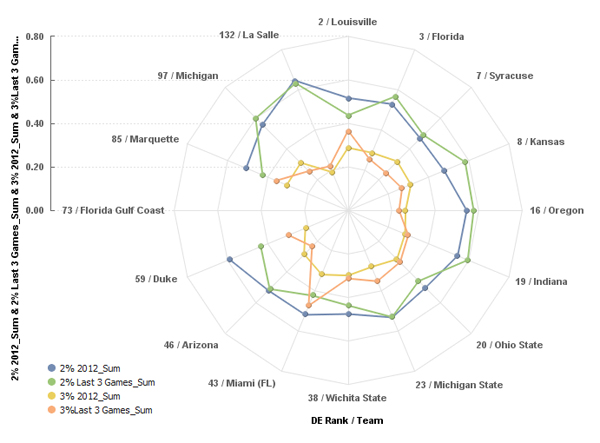 It’s great how the data interprets the playing style of each team, from the ones that defend the paint (Louisville) to the ones that minimize 3-point shots (Duke, Oregon).  Surprisingly there are statistical similarities between teams like Oregon, Indiana, and Ohio State despite the trouble the latter two teams had against their opponents compared to the Ducks.

This worries me considerably, I need Indiana and Ohio State to reach the Final Four to have a shot at winning my pool.

Who Are Your Picks?

Build your data set with SAP Visual Intelligence and tell us who’s in your Final Four!

It is quite stressful to have your team in the Sweet Sixteen.

I will try to participate without skewing the results towards my team.

Great job with the Visi results.

Thanks Tammy! Looking forward to seeing your analysis, always looking for new ideas. 😆