SAP InnoJam takes a first peek out of the box

I have to say that March was really busy with InnoJams. InnoJam @ CeBIT and InnoJam @ SAP Innovation Forum Copenhagen were real highlights. Following the old tradition of “all good things come in threes”, there had to be another one. 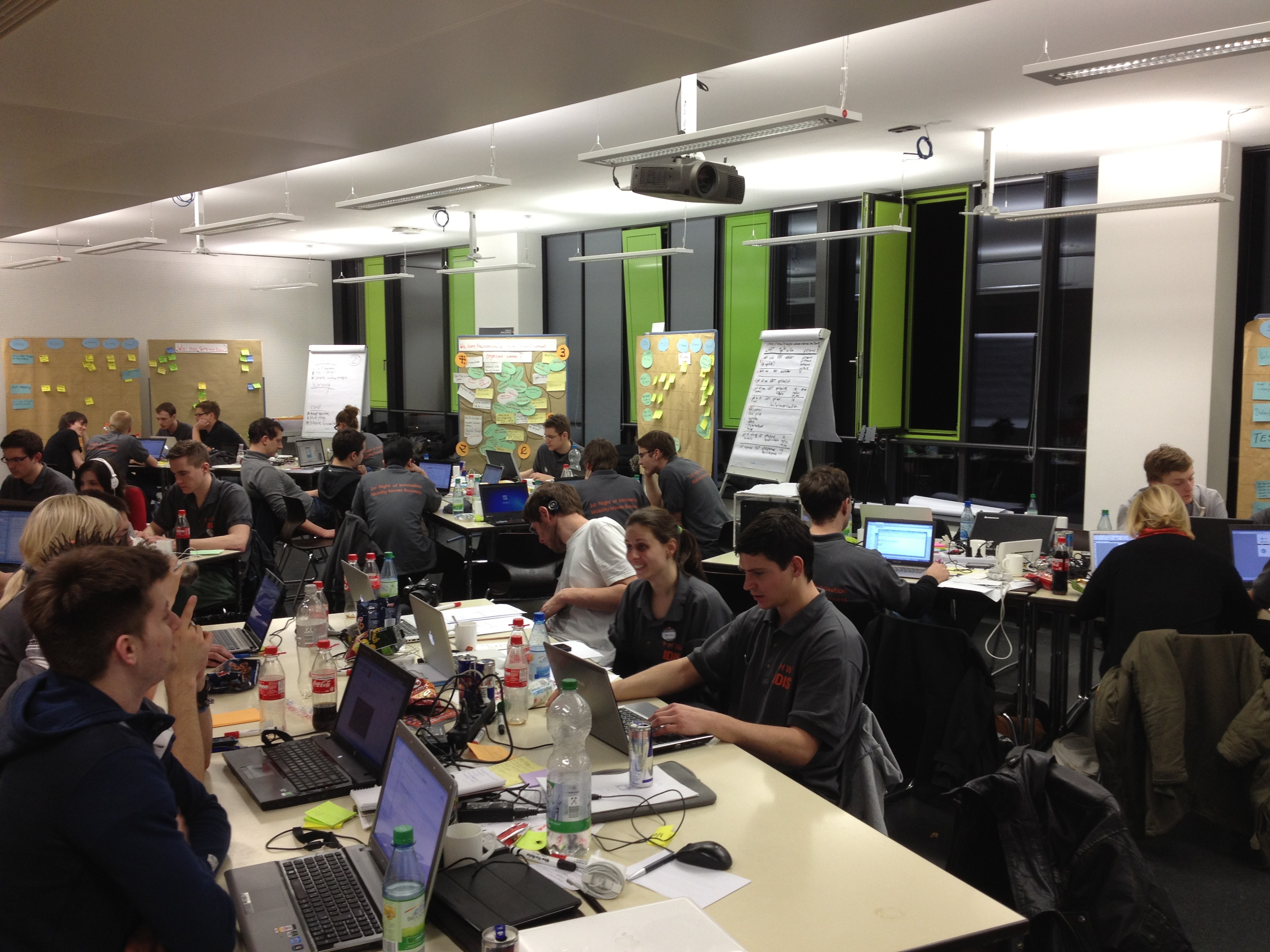 Now, this third event which I attended on March 19+20 was called “InnoNight” (or “1st Night of Innovation”) and had been completely organized by people at FHWS (Fachhochschule für angewandte Wissenschaften Würzburg-Schweinfurt, university of applied sciences Würzburg-Schweinfurt). So, in fact it was not an SAP InnoJam by name, but I think the inspiration is obvious, and its success made it nothing short of a real InnoJam event.

Let me just say one thing: This is absolutely awesome! Who would have thought a few years back that this format would inspire people to adopt it for their own developer events. This is exactly what we want. Get it out of the box. Spread forth and multiply. OK, those words might be a bit too strong, but whoever reads this – read it as a call to action. Design-Thinking-infused hackathons really give you another quality of events, and it’s perfectly suited to include non-developers as well. Mix in a few SAP and partner technologies and you get a top combination of fun, learning and innovation.

Let us know, if you need help organizing your own event 😀 ! – sapinnojam@sap.com

The organizers of “InnoNight” clearly did not need help, as they had it all figured out – pretty much to the last detail (APPLAUSE). They even introduced a new component: SCRUM. I can only commend them for that idea, as it very much helped teams during development. I was doubtful myself, but the structure of 4-hour sprints, sprint reviews and plannings, as well as “daily stand-ups” at each half-way mark actually does help. Team members communicated on a regular basis and, what is even more important, they forced themselves to develop incrementally and plan ahead. In the end there was no sweating 30 minutes before the coding deadline and frantic scrambling to put together a presentation concept. Coding pretty much finished 1 hour before presentations were scheduled to start and each team had their presentation figured out, leaving them a few minutes of respite. As this event was a warm-up for “Mobility Moves Business” – a congress for mobile people and systems, all “InnoNight” topics involved aspects of mobility and social networks. There was a topic on neighborhood help, one on socializing music taste, one on remote home controlling, and so on. Educational background of the 40+ participants was somewhat diverse, with students from computer science, business informatics and multimedia design, so each of the 6 teams had a good mix of T-shaped personalities in order to tackle the topics in a Design Thinking exercise. This lasted from 2:00 pm to 7:00 pm, when the last team had presented their DT prototype. BTW: Great acting by some of the teams. I do enjoy a good stage play.

Except me, representing SAP, there were also three developers from the mobile solutions team of Deutsche Telekom. They acted as topic experts and SCRUM coaches. The coding part started around 8:00 pm with a short introduction to SCRUM and the selected components of that methodology that were going to be used. Each team had a SCRUM coach, who more-or-less took over the role of SCRUM master. First activity for each team: plan the first sprint. User stories appeared, disappeared, got changed. It all happened like in a real SCRUM project, just a bit quicker. I embedded myself with one team and helped them with their back-end component, which we hosted on SAP HANA Cloud (formerly SAP NetWeaver Cloud). Thanks to Uber-Wizard, ex-teammate and HANA Cloud evangelist Rui Nogueira, we were able to generate the entire persistence, management UI and half the necessary Web interfaces. All of that in the blink of an eye. 😉 The students then developed additional Web interfaces and an Android app, which allows community members to post requests for help, find requests from others nearby and respond to them. Pretty simple. Pretty powerful. 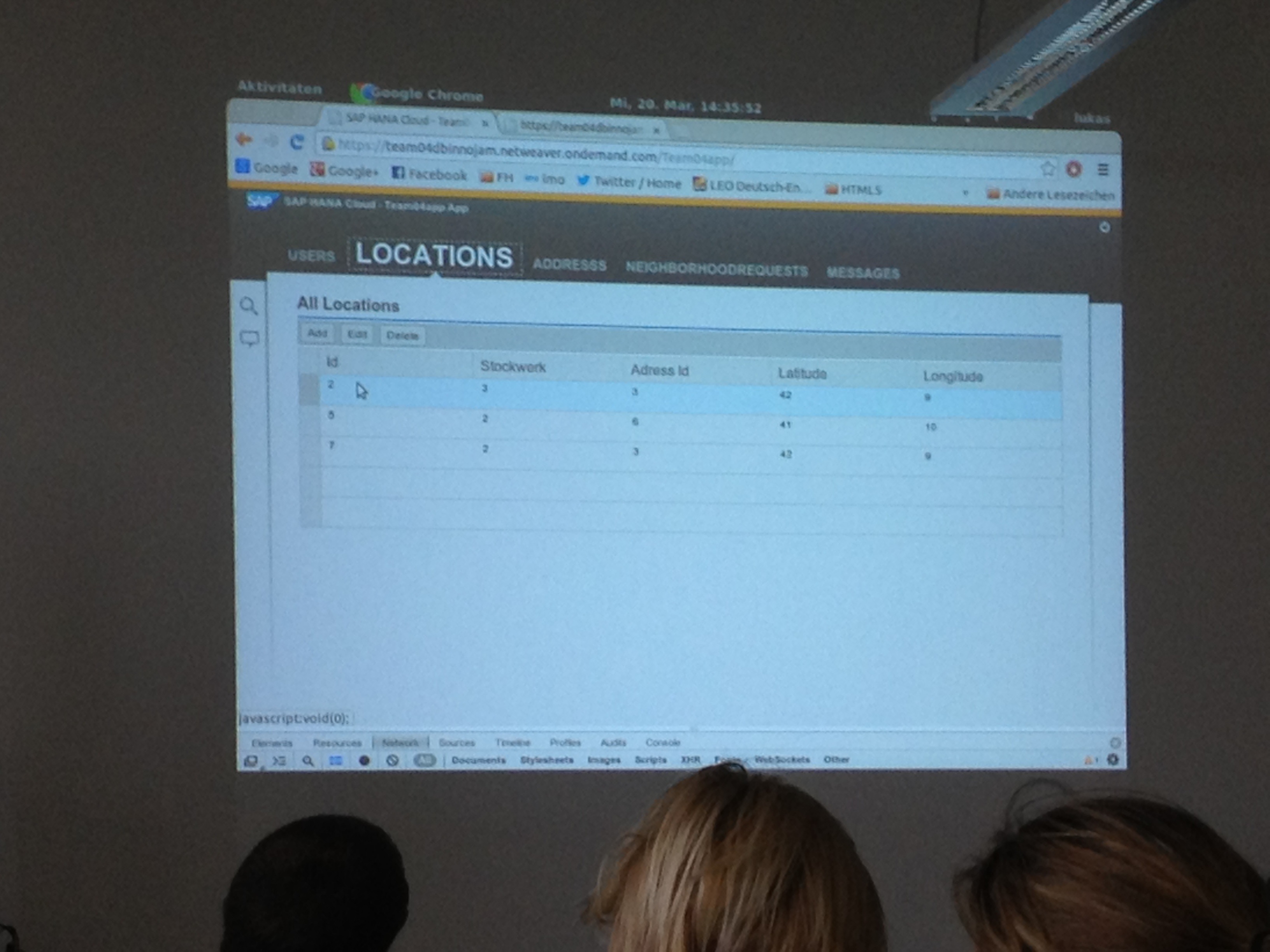 I wasn’t able to attend the congress the next day where the winners were announced, but read all about it here (my team didn’t win 😡 ). I can still say is that I had lots of fun and that I was truly amazed how smooth everything ran. Congratulations to all the teams for putting together a number of rather interesting and quite useful apps. Special kudos go to “Team SAP”, which embarked on the adventure to use SAP HANA Cloud. It was an honor and pleasure. I think you guys learned a lot and definitely had THE BEST back-end!!!

Thank you very much to the organizers for inviting me: Melanie Saul, Prof. Karsten Huffstadt and Prof. Peter Bauer. Looking forward to doing this again in the future.

Well that leaves only on thing to say: Come and check out our Free Developer Edition of SAP HANA Cloud (your own small app server VM in the cloud).

Read on: detailed report of the event

Sounds like an awesome event! And I will certainly suggest the use of scrum to the innojamnl 'committee'!