*Check out part 2 of my analysis of the remaining Sweet Sixteen teams and part 3 of the Final Four.*

Hey data geeks and sports fans!  March Madness starts in a few hours and I hope you’ve made your picks for favourites and upsets.

The NCAA tournament is by far my favourite fantasy sports event.  Continuity is hard to come by even for good college teams and it’s difficult to predict their performance game in and game out.  Factor in the single game elimination format with one-and-done players and it’s upsets waiting to happen.

A perfect storm for SAP Visual Intelligence.  Who’s going to survive and advance?

Loading Nic Smith’s data set into SAP Visual Intelligence, I filter out the 68 schools in the tournament. 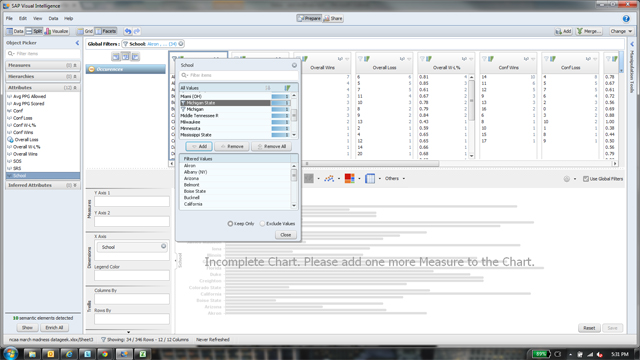 The data set contains two critical pieces of information for our analysis: Strength of Schedule (SOS) and Simple Rating System (SRS).  NCAA schools play in different conferences, and it’s unfair to punish good teams playing against tough opponents.  I need to take that into account.  Point differential measures a team’s performance against their opponents and this matters significantly.

– Strength of Schedule (SOS) – A rating of strength of schedule. The rating is denominated in points above/below average, where zero is average.

– Simple Rating System (SRS) – A rating that takes into account average point differential and strength of schedule. The rating is denominated in points above/below average, where zero is average.

This gives me my apples-to-apples comparison.  I add SOS and SRS as measures along with Average Points Per Game Scored (APGS). 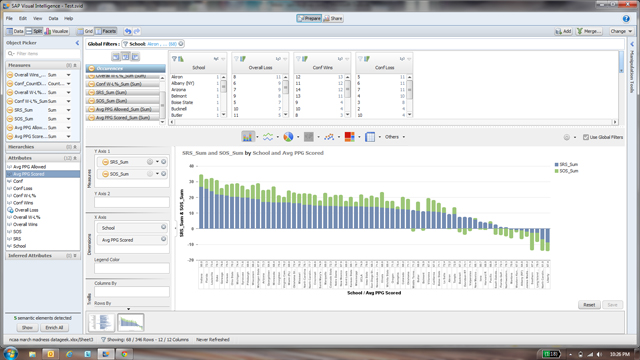 Typically 1-4 seeds are pretty easy to call and we can see that on the data. I’ll focus on the 5-12 seeds and look for an potential upset. 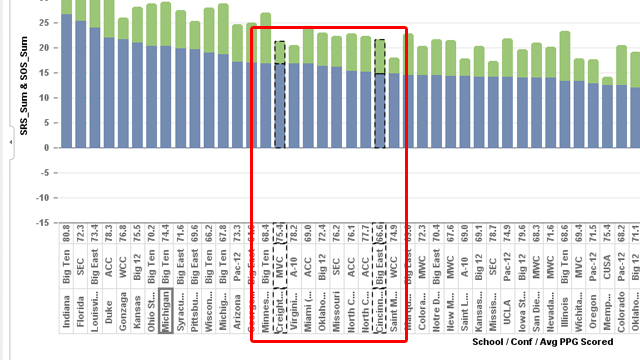 Voilà!  I have my first upset.  No. 10 Cincinnati over No. 7 Creighton.  The Bearcats play in the second toughest conference and it’s reflected by their SOS. Creighton scores a lot of points and has a slightly higher SRS, but it’s against weaker teams.  It’s a tough decision, Creighton is the hotter team and they won their conference but the tough Big East is hard to ignore.

No. 7 Illinois is going pretty far in my bracket as well thanks to SOS and SRS.  They had a huge upset over Indiana and play better than their ranking.

In past years I’ve been horrible picking the tiebreaker score.  SAP Visual Intelligence is making my (now educated) guesses a lot easier.  I simply take the APGS for each finalist and round to the nearest whole number. 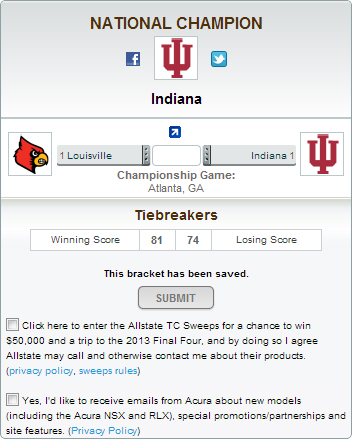 I feel pretty confident about my bracket.  President Obama picked Indiana in his bracket and has the same Cincinnati over Creighton upset.  He did pretty well on his bracket last year and at one point scored in the 96th percentile.

Subject matter experts are able to make tough decisions on close calls based on past experience.  With little knowledge of this year’s tournament teams, I picked upsets and dark horses like a seasoned scout using SAP Visual Intelligence.  I’m going to apply this methodology to my day-to-day analysis, and I hope you do as well.

Well done, Sam! Thank you for this timely application of data analysis ...

I just hope is predictions are all wrong 🙂

Thanks Mark and Tammy!

My 5-12 games took a beating today.  Talk about unpredictability!

Awesome post Sam! Will be posting the Data Geek squad results after week 1 of the tourney at www.sap.com/marchmadness