In this blog I would like to present you technique which is used for business logic testing without database dependency. It is implemented with object oriented design. Many developers complain that they cannot write too much unit tests because their reports use database and tables content may easily change.  Removing database from testing is the key factor to have successful unit tests.

Let’s imagine that there is test that uses database:

And this test can work fine. But it may not always give same result. In case if someone else will manually create row, or change/delete it during test runtime, we can have error that will interrupt our test or invalid results finally.

That is why good unit tests:

I think that it is really bad thing to have “randomized” test failures. It means that logic of program and test is correct, but accidentally test is failing because of environment set up or other factors. We need to eliminate this, because unit test failure must notify about defect in business logic and not in testing environment.

There are many ways of doing it, like using interfaces or inheritance.

I want to recommend one approach that uses inheritance, because:

We need to make distinction between:

There is a design template that we can use for testing database dependent logic with dependency injection. If you follow this approach, it is easy to extend production code, database queries and testing in the future.

2. Global class (production code) keeps attribute of mo_dao_instance, which is initialized in constructor.

3. All database operations from production code must be delegated to DAO instance.

4. For testing scenarios, we create new class that pretends real DAO, but has predefined results for each method.

6. After we have everything above set up, we can easily inject mock DAO to unit tests.

Below is the summary of all described steps, showing end to end example of production code and test code. 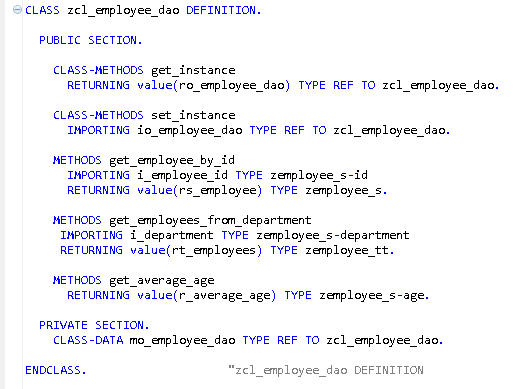 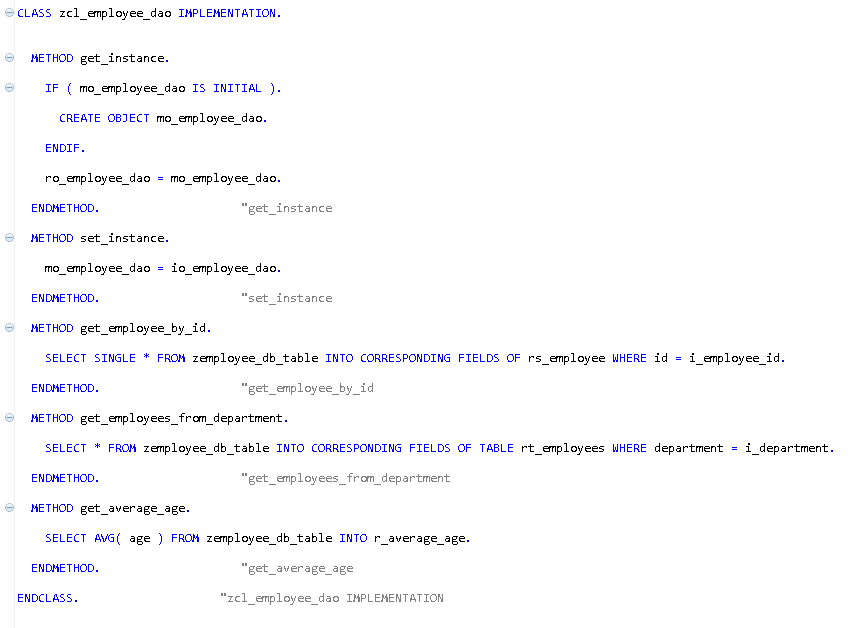 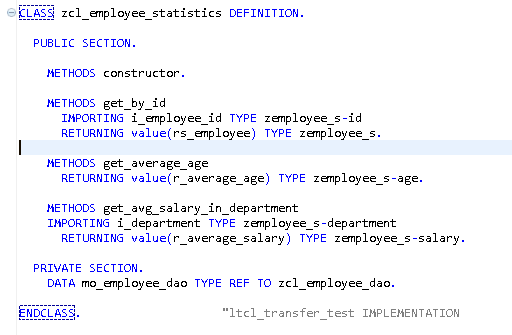 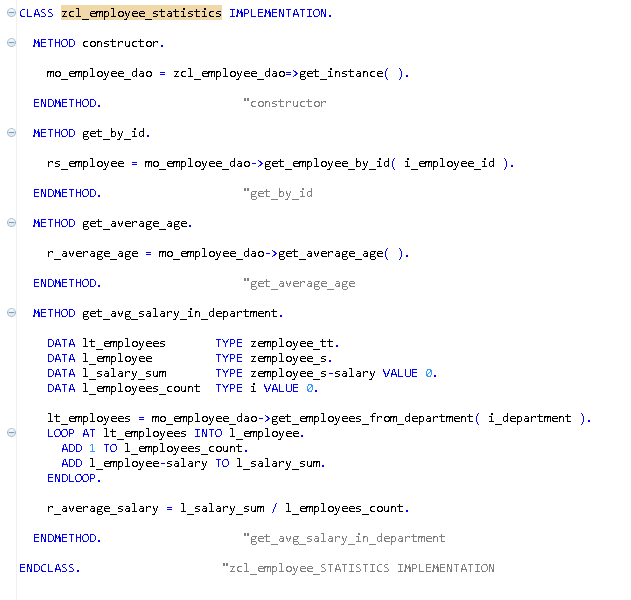 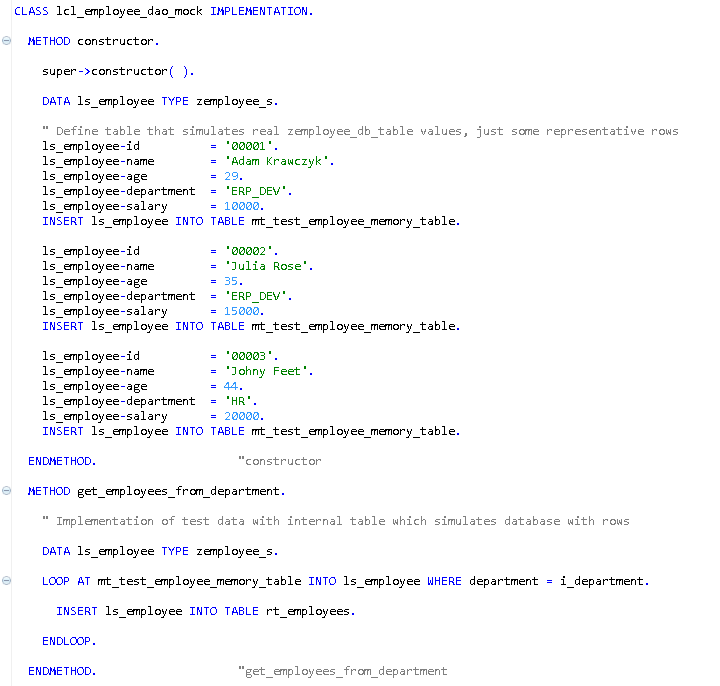 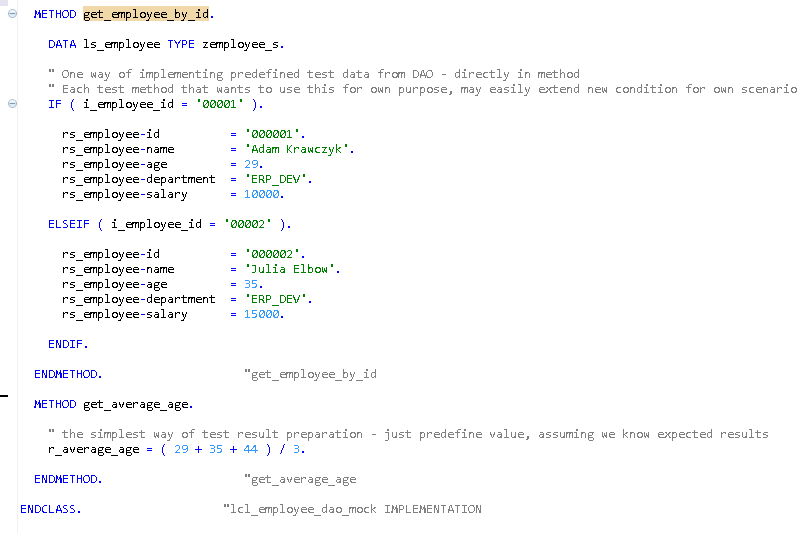 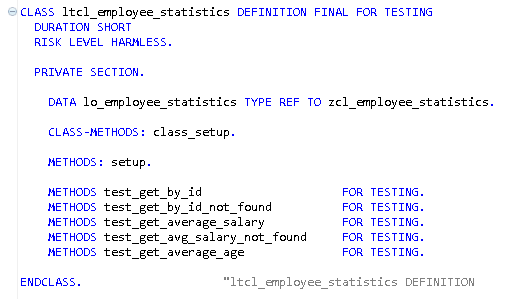 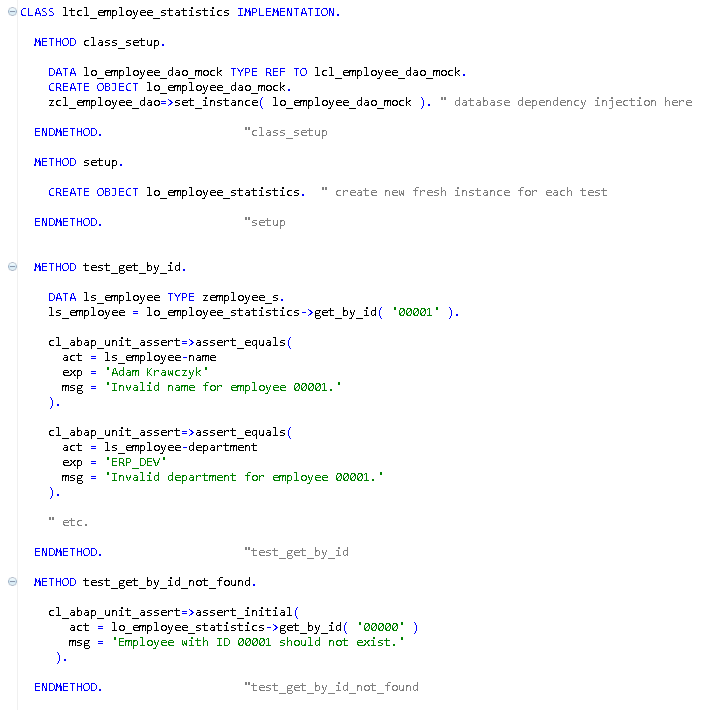 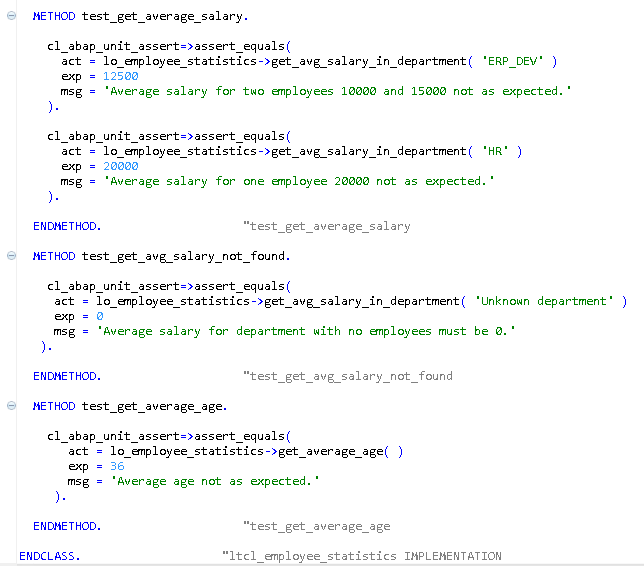 I am attaching also text file with all code from presented example so you can use it for testing.

I hope that after reading this blog you will see how easy itis to write unit tests even for logic that requires access to database. If it looks like much code for such simple example, believe me that it is worth to spent time and create unit tests anyhow. Even and especially complex reports need it, where simple change in the future may impact behavior and non-author is not sure if he can add new line there or not. If code is well tested, there is less chance for unexpected errors. Lately there are tools that allows you to easily execute unit tests and measure code coverage but that is another story.

Keep in mind that Unit Tests that skips database by pretending it are verifying business logic but not end to end program behavior. If there is error in real DAO method, in select statement for example, our tests will not discover it. That is why end user tests are important as well. But users have less to test or less probably will discover logic bug after code was already tested on unit level. Of course it is also possible to write unit tests for DAO class itself, by inserting, reading, validating results and deleting rows for example. But I mentioned at the beginning that this are not pure unit tests, but may be helpful anyhow. Just group them in category “may have randomize fail”.

There is one more advantage of using DAO concept. If we delegate all database operations to DAO classes in our development, they can be reused by anyone. Additionally class can be tested by F8, and single methods may be executed. In this way we can check database statements (or function methods) results that are already implemented in DAO, no need to implement temporal code or thinking how to query table or execute join statement.

I recommend you to use DAO concept and always extract database logic from business layer. I strongly encourage to write unit tests whenever it is possible. – try and see long term benefits.

Great article! I'm still learing with abap unit testing and this has been most helpful. I have started to use unit tests but only in limited areas - this provides me with a good starter to keep me going.

Thank you once again.

I am glad I can help. Even if this article is long (I tried to put all details), writing good unit tests is really simple and presented technique easy to learn. Good luck with your clean code journery! 🙂

Excellent stuff! I might come back and post more comments when I am sure I understand it (and live it!) all! 🙂

I'm a big fan of separation-of-concerns(SoC) and i think DAO conforms to this as well.

Anyway i've itching to use ABAP unit, but unfortunately have not been able to do so. But when i start using it DAO is the thing to look upto.

You are right, persistance class is one way to implement DAO for simple queries and new development. If we need to work with already existing tables, using manual queries and predefined BAPIs/functions is a better choice. Moreover you control performance, can provide different variants of methods - single item details or massive queries with range etc.

I encourage you to practice unit tests as it improves quality and gives fun as well.

Could you explain to me how you can wrap DAO over a persistence class (maybe with an UML diagram) ?

Hi Adam, thanks for sharing your insight on unit testing with us. I am a little confused about one thing, hopefully you can help me out a bit. You use the DAO class to access the database (and perhaps other dependencies). You inject the DAO into the business class so that the DAO is used by the business class, and then you call the business class methods from your application code. But you can also call the DAO methods directly from the application code. For instance, you can either call ZCL_EMPLOYEE_STATISTICS->GET_BY_ID( ) or you can use ZCL_EMPLOYEE_DAO->GET_EMPLOYEE_BY_ID( )  from your application? Both end up calling the DAO method eventually, but when should you use one over the other? Does it make sense to have to accesses to the same logic?

I am not sure which is the better approach, but perhaps you have some thoughts on this,

Cheers, and see you soon!

Nice to see you here. Sorry for late answer, but my son Alexander was born in the meantime, I am again happy father now 😉

Your last example with ZCL_EMPLOYEE_DAO->SAVE_EMPLOYEE( lo_employee) is ok but I would probably not use it. If you do it, you make dependency in both directions - DAO uses business class and business class uses DAO (in different methods). To keep it simple I would prefer to have method ZCL_EMPLOYEE->SAVE( ) which inside uses DAO to update database. In this way there is only one way dependency - business class is using DAO but DAO is not even aware that ZCL_EMPLOYEE class exists.

Great article. Let's hope it fosters the coding with unit tests ( in best case TDD )! It can be so helpful.

Would like to check if we are going to add in test doable class for the DAO and have expected to return > 300 lines of database lines? What will be the best way to do that as coding single line by line will really consume alot of time?

do you really need that many test data records in your unit-tests?

What do you want to test?

It depends on case, but I would rather not created test for 300 lines. As Dirk already mentioned below, do you really need so many?

Unit Tests should consider boundary conditions. For numbers it will be negative, 0, 1, 5 and big number 1000000. For table contents it will be like: no rows, row with empty/unexpected values, 1 row and 3 rows. If logic of program works for 3 rows, why it should not work for 10, 100 or 1000? This is how I would approach it.

If you really want to see how program behaves with 300 lines (because you experienced that something is going wrong with many lines only), I would simulate it with LOOP statement so that few lines of code would create 300 entries and assertions verify results. For sure I would not copy paste 300 lines.

Unfortunately I can`t find you txt file wich you attach to this article. Above you say about this "I am attaching also text file with all code from presented example so you can use it for testing."

Can you help me find this file or reload?

Nicely put through. Easy to understand. Thanks 🙂

Very nice and clear article, thanks for posting it...

One question though comes into my mind: as I know, the Singleton pattern is to be avoided.

Is it really needed here? Which are the risks here in case of using a non-singleton pattern? Is there a risk of instantiating a class more than once during the runtime, and therefore having the risk of creating different data objects with different selection criteria?

Thank you for a short clarification

I am attaching also text file with all code from presented example so you can use it for testing.

The attached file seems to have disappear.