Let Us Not Blame the User

Just recently Jim Spath and Thorsten Franz were ribbing me on Twitter and Facebook (making fun of me or teasing me) about a blog I wrote quite a few years ago called:  Why Don’t They Let Me Blog .  (Jim actually wrote an excellent blog five years later on the same topic called: Bloggers: “Write Frankly And Fearlessly, But …”

I re-read my blog post and was rather appalled at how it was written back then. Why?  It sounded like I was blaming suggesting that users weren’t taking the time or effort to properly submit their blog applications and were spamming the moderation queue with requests to blog when they really hadn’t a clue about what blogging meant or what they wanted to write about.  It sounded like I was somewhat complaining about those same users wasting the valuable time of the moderators.

While my early blog might have had a few valid points, I don’t think it showed much empathy or compassion for people who were attempting (and not fully succeeding) to use a blog tool we offered on our platform.  The blog premise ignored the challenges that some faced in understanding how to blog and additional issues they had in using the rather clumsy mechanisms for blogging in place at the time.

We have all come a long way since then, both in our understanding of blogging and community and the ease of creating a blog on SCN, and yet I find myself re-visiting my own lack of patience with users and seeing (again) how confusion over how to post a query or discussion might now lead to people inadvertently blogging something when all they wanted to do was to ask a question. And no, I have no intention of shaking my finger at them again and writing a new post called: “Why Don’t They Let Me Post a Discussion Question?”.

Jeanne Carboni  wrote a thoughtful blog two years ago called: Be Careful How You Post to help clarify the “how” to post and I recall (with some amusement) how Johan Hakkesteegt responded in comments and with irony about “those pesky users” to Laure Cetin who suggested finding some “missions” for folks to complete to help in their understanding of how to use the platform better.  When Laure launches the gamification platform we will indeed have some wonderful opportunities for training and behavior guiding.

All of us seem to be focused on the same good end result of having folks understand how and where to post.  There continue to be many efforts around improving navigation, improving the labeling of actions, creating tutorials, training users and moderators.  You can find a plethora (large number) of contents by searching for “How to Blog on SCN” (This link does a search for blogs on this topic in the space About SCN ) and you could do the same thing for “How to Ask a Question”.

Many folks receive a Direct Message (DM) from me and other moderators explaining how their content has been flagged for moderation as a question not a blog and how we request that they repost their questions as discussions rather than as blog post.  Some of us have jokingly called this problem the “Notablog” post and our leadership has taken a real interest in seeing this issue addressed. 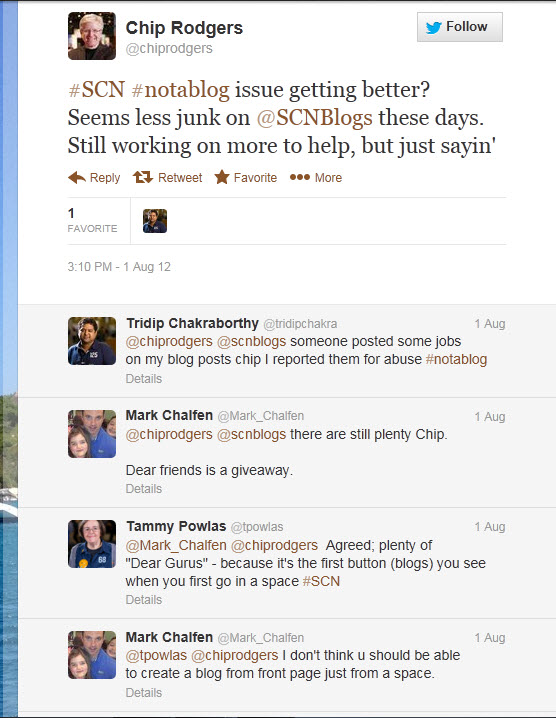 It dawns on me we should be directly asking the folks who post incorrectly, why they did so and rather than blaming them work with them to address the issue.

Dear Community, if you come across someone making that error please point them to this blog so that they can guide us better and we can understand:

I’m going to add to my future messaging of users while moderating an invitation to speak to us, the team and for us to gather more intelligence around how we can prevent these posting failures and how we can learn from our users without blaming and shaming them.