The AWS cloud solution that never was: The strange case of EPM OnDemand for Expense Insight on HANA

SAP was recently positioned in the Leaders Quadrant in Gartner Corporate Performance Management Suites Magic Quadrant, yet an EPM OnDemand offering on AWS has been made unavailable and SAP has taken pains to erase most if not all references to this offering.

This blog takes a look at this missing application and discuses the broader cloud-related implications of its disappearance. 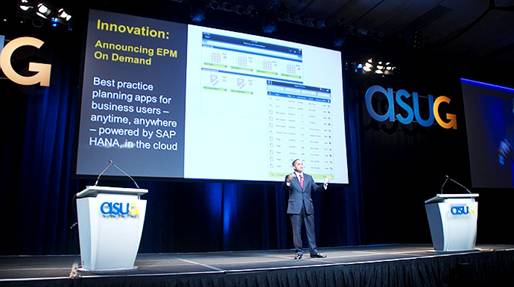 Here is a short description of the applications:

With the SAP Enterprise Performance Management OnDemand (SAP EPM OnDemand) solution, organizations can better manage their overall performance by lowering costs and maximizing efficiencies with real-time insights into areas such as expense. [SOURCE]

There were three applications:

The applications were all HANA-based and, as their name suggests, cloud-based.

At the time of its announcement,  one product in particular – SAP EPM OnDemand for Expense Insight – aroused my interest, because it was available on AWS.  I blogged about the offering – critically wondering if any company would agree to restrictions imposed by its Terms and Conditions – and then I moved on to other topics.

Toward the end of the reign of Thutmose III and into the reign of his son, an attempt was made to remove Hatshepsut from certain historical and pharaonic records. This elimination was carried out in the most literal way possible. Her cartouches and images were chiselled off some stone walls, leaving very obvious Hatshepsut-shaped gaps in the artwork.

At the Deir el-Bahari temple, Hatshepsut’s numerous statues were torn down and in many cases, smashed or disfigured before being buried in a pit. At Karnak, there even was an attempt to wall up her obelisks.  [SOURCE]

Recently, I was doing some research for a blog on HANA One and I revisited the EPM OnDemand for Expense Insight offering on AWS. 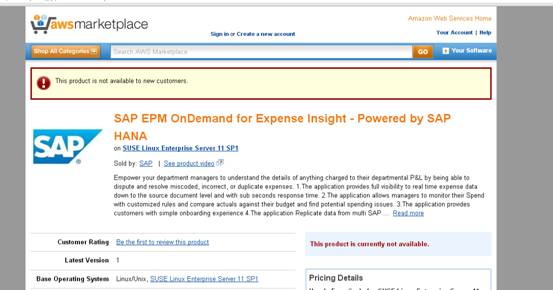 I was surprised to find that it had been made unavailable.

It no longer appeared in the search for SAP’s offerings on AWS: I started to examine all the references that I could find and the results were similar:

Note: If you want to see the actual contents of these documents, just look at them via the Google cache like this one.

The products had vanished.

In the Gartner report that places SAP as a leader in the Corporate Performance Management Suites Magic Quadrant, new associated mobile solutions – including EPM Unwired – are mentioned directly. The OnDemand offers are never mentioned.

The documents mentioned above were all created in October last year when the announcement at the BusinessObjects User Conference took place. The latest modification date for the documents that I could find was in late January this year. I couldn’t figure out when exactly the content and the solution were taken offline. I assume that the kill date was sometime in the last 1.5 months.

Note: SAP does not have to ask my permission to remove an application from the market.  However, an attempt to erase most references to a product does raise some degree of suspicion. When this action occurs within 6 months of product’s release, then the associated bad smell is just exacerbated. The Internet has a long memory and the context is usually still available somewhere.

It looks like the whole EPM OnDemand product – not just the Expense Insight offering – has been pulled from the market.  There are a variety of reasons for such moves – wrong technology, weak uptake in the market, competition with another SAP product. I have no idea what the actual reason might have been.  I view things from a cloud-centric focus – the motive could be EPM-domain-specific.

I found one reference that provides a possible clue for the action. In a Google cache, I found a document describing the configuration of the application 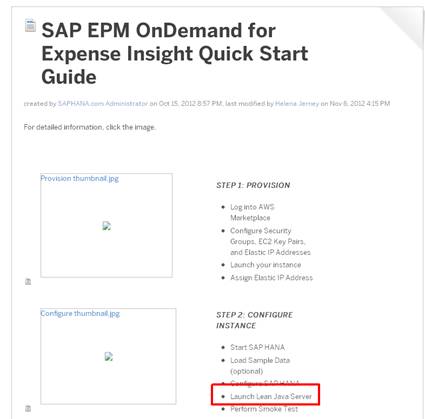 The use of the Lean Java Server (LJS) suggests that the application was based on an older architecture that was often used in earlier versions of the applications that ran in the HANA App Cloud. With the emergence of HANA XS, the use of LJS is no longer necessary.   Thus, I assume that the whole EPM OnDemand offering was pulled in order to be rewritten with the new technology – a shift from a three-tier to a two-tier architecture.

There is also another possibility. The application could also be moving to the NetWeaver Cloud.

Both possibilities show how the use of HANA in SAP’s cloud activities is evolving – the options available for such scenarios are crystallizing.

Sanjay Poonen just starred in a customer-success video for AWS – confirming the importance of the cooperation between the two companies.  The exact manner in which the two companies will collaborate in the future, however, is still open.

I head up EPM product marketing at SAP. From an EPM perspective, when we released the 3 SAP EPM OnDemand apps last year, the feedback we received from customers, analysts and partners was that for orgs considering cloud-based EPM solutions, what they wanted was a core planning+consolidation solution/platform in the cloud ie what they wanted was SAP Business Planning and Consolidation (BPC) in the cloud. For this reason we are planning to introduce BPC NW on SAP HANA hosted in the cloud sometime in the first half of this year. And while the 3 SAP EPM OnDemand apps are no longer available, the SAP EPM Unwired mobile UI (which was the mobile interface to the SAP EPM OnDemand apps) remains as the mobile interface for EPM with initial support for BPC. We addressed the aforementioned topics and others on an EPM roadmap presentation today - you can view that recording here (note, registration is required): http://event.on24.com/r.htm?e=585045&s=1&k=C1AFFF0340D828296108F37FDCD5C118&partnerref=EmailPresenters

If I had seen such an explanation before I started researching, I wouldn't have been so confused.   Products evolve - emerge and die - often rapidly  - that is today's marketplace.  The fact that the EPM OnDemand apps were pulled wasn't the problem - it was the official communication strategy - or lack thereof - that surrounded their demise that I found bewildering.

I'll watch the webinar to get background information on BPC NW on SAP HANA hosted in the cloud.