Introverts Are More Detailed Than Extroverts 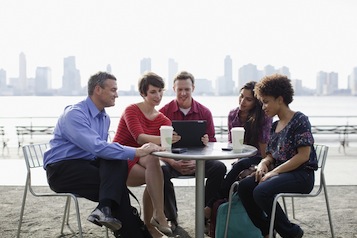 If you want to hear lots of specific details about a TV show you missed, you’re better off asking a shy person in the office, rather than the loud-mouth talking about it in the break room. That’s because, according to a study by Dutch scientist Camiel Beukeboom, introverts use more descriptive and concrete language than extroverts. Extroverts are far more likely to use abstract language and remember details less accurately.

In the experiment, 40 subjects were asked to describe a set of ambiguous photos and then returned three days later to take a personality test. Participants who were graded as introverts had more mentions of numbers, used more definite articles (i.e. “a”, “the”), and made more distinctions in their speech (i.e. use of words like “but” and “except”). On the other hand, extroverts used more colorful adjectives and described objects/events that were not visible in the photos. When asked, the extroverts admitted to engaging in interpretation.

It’s an intriguing theory but I wonder if there are flaws in the study. Using only 40 subjects from the same company may not be a representative sample. In addition, the authors did not consider other personality factors that might affect language use. This could be a situation of correlation but not cause.

I’ve read the study a few times but there aren’t enough details for me to decide for myself. The author must be an extrovert.

This blog was originally posted on Manage By Walking Around on March 17, 2013.

What other applications do you see for these findings, Jonathan? I agree that 40 subjects isn't enough, and I'm also curious about how researchers differentiated between introverts and extroverts.

But I cannot help but wonder how many introverts would have spotted your invisible gorilla.

In my opinion  i  think  introverts do  pay a lot of attention  to detail though being by themselves.  For a larger group case analysis  , there is a a brilliant book by Susan Cain called  " Quiet " , where she clearly calls out  and emphasizes  the strong points of introverted people.  Cain notes, “Shyness and introversion are not the same thing. Shyness is the fear of negative judgment, and introversion is a preference for quiet, minimally stimulating environments.

Thanks for sharing this Jonathan! You could be right about the author being an extrovert. 😉

I posted Introverts and Extroverts - Who Cares? not long ago to point out the possibility for digital media to be the equalizer for introverts and extroverts. Wonder how this study applies to behaviours in the digital world? Would introverts share more details in tweets or blogs?