Tracing a Program with the ABAP Debugger Script

This is my second post on practical uses of the ABAP debugger script. My first post is on how to create a watchpoint for a field symbol.

I remember working on an undergraduate college programming project in an IDE where we did not have a debugger. When something was not working right, we would add write line commands to try to find where things were going wrong causing the program to act incorrectly. In most cases, interactive debugging can be a much faster way to figure out what is working or not working. Recently I was working on an issue with a program which had pretty complicated logic, so I wanted a print out of what was happening in specific scenarios, so that I could discuss it with a business analyst. Previously, I would step through the program for each scenario in debug mode and write the results of the logic on a piece of paper.

Instead of using this paper based process, I decided to try to find a way to accomplish this using the ABAP debugger script. Within the debugger script, you can write out custom trace records, which can then be viewed by other users on the system in transaction SAS. I will explain how I did this, but I am assuming that you already know the ABAP debugger script basics that I covered in my earlier post. For this example, I will us a simple FizzBuzz program, which will print the word “Fizz” for ever number divisible by 3 and “buzz” for every number divisible by 5 up to 100. The code is displayed below.

Now, before running the program, type “/h” in to the command line to enter debug mode. Click the

button to see your custom trace results and you will now see your trace as displayed below. From here, you can export the results as a file, filter on a column (notice that I set the custom value column) or search for a particular record. 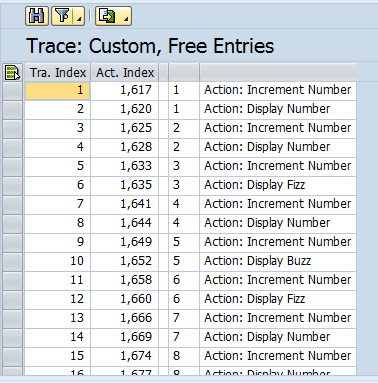 This use of the ABAP debugger script saved me a ton of time while working with someone on a recent project. We were able to run it and quickly find out why certain items were displaying on a report or why they were being hidden. Have you done something similar with the debugger script? Do you have any suggestions on ways to improve this method of creating a log? Please leave a comment below!

Nice if we have no clue which table entry is having issues this is good tool to analyze the data....

I think you must be aware of the 999 line item issue with accounting documents. And we have a logic to split the records in case of > 999 line items.

I am trying to perform unit test but unfortunately i can't due to lack of data in DEV. I was thinking if we can use debugger scripts to add items to the table?

You definently can! Click on the script wizard and go to Variable Information->Change Variable Value->Table->Append Table Line. There are also methods available for Insert Table Row (by index or key).

Hopefully that works for you! Let me know if it does not!

I haven't used the debugger script yet. When i first heard about it, i thought "What a cool feature". Then i went and checked the videos about it, i played around a bit with it, but i struggled to find a use for it during a project.

This is a good example indeed.

Can you tell me if we can use this feature to trace a WebDynpro ABAP code?

I have not tried this with a WebDynpro ABAP page, but I assume that it would work.

Hey Brian, thanks for the reply.

Actually I couldn't manage to do it with ABAP scripting..I assume that since we have an HTTP request in the middle, the script losts the context...

Even so, I found a tool to do some kind of trace in WDA..not very friendly but it gives some info..

Here it is if you want to have a look:

Hi Brian, thank you for this helpful blog.

Is there a possibility to enhance this requirement via debugger scripting.

Break/Stop when you find this string '9999 in any variable (local/global/nested objects etc.)

I am missing the option to work more generic/dynamicly.

sorry, but I can't think of a way to check all variables. I would recommend stepping through the program in debug to find some suspects and get a better understanding of the program logic. Good luck!

thank you very much for this information.