In my previous blog post, we looked at ways of enhancing business objects (BOs) defined within the BOPF. Once these enhancements are in place, it is a good idea to unit test the changes to make sure that the BO is working correctly. If you subscribe to the test-driven development (TDD) model, then an obvious choice here would be to use the BOPF API to write some ABAP Unit test cases. However, sometimes we just want to run a quick ad hoc test. Or, we might just want to display BO data at a glance without constructing a multi-table join in Transaction SQVI. For these tasks and others, SAP provides us with a very slick tool: the BOPF Test UI. In this final blog post, I will introduce this transaction and demonstrate its basic capabilities. Then, to round things out, I’ll briefly touch on UI integration and the FBI framework.

Working with the BOPF Test UI

We can access the BOPF Test UI by opening up Transaction /BOBF/TEST_UI. When you initially open up the tool, you’ll be presented with a screen like the one shown below. From here, we can begin working with a BO instance by plugging in the BO type in the Select BO input field (either key it in or use the provided input help) and hitting the ENTER key. This causes the BO metadata to be loaded into context so that we can use it to guide ourselves through the editing process.

Once the BO metadata is loaded, we have two choices for maintenance:

Regardless of whether or not we’re creating a new BO instance or editing an existing one, the entire scope of our changes is tracked via a BOPF transaction like the one we would create if we were doing all this by hand using the BOPF API. At any point along the way, we can choose to commit the changes using the Save Transaction button, or revert the changes using the Cleanup Transaction button. Then, we can start the process over by selecting another BO instance or editing the existing one in place. All in all, it’s kind of like table maintenance on steroids. But wait, there’s more!

In addition to the basic CRUD operations described earlier, the test UI also provides functions to call actions, validations, and even trigger determinations. For a given node instance, these functions can be accessed in the node instance toolbar via the Check and Actions button menus (see below). If you read through my blog posts related to the BOPF API, then these should feel quite intuitive.

UI Integration and the FBI Framework

Since the focus of this blog series has been primarily on introducing the BOPF framework, I have purposefully avoided digressing into specific applications of the BOPF (e.g. in Transportation Management or EHSM) since these products add additional layers on top of the BOPF that can sort of cloud the picture a bit if you don’t understand core principles of the BOPF itself. However, before I bring this blog series to a close, I would be remiss if I didn’t point out one important  (and relatively generic) framework built on top of the BOPF: the Floorplan Manager BOPF Integration (FBI) framework. As the name suggests, this framework links BOs from the BOPF with Web UIs based on the Floorplan Manager (FPM) framework and Web Dynpro ABAP (WDA).

If you’re developing Web UIs on top of BOs from the BOPF, then the FBI is definitely something to take a look at. Essentially, the FBI exploits the genericity of the BOPF API and the accessibility of BO model data to enable the rapid development of Generic User Interface Building Blocks (GUIBBs) based on BO nodes. Here, for example, we could create a form GUIBB that allows users to populate the data for a BO node using a simple input form. In many applications, this can be achieved without having to write a single line of code. While a detailed discussion of the FBI is beyond the scope of this blog series, a quick Google search will lead you to some pretty decent resource materials. If you’re new to FPM, I would also offer a shameless plug for my book Web Dynpro ABAP: The Comprehensive Guide (SAP PRESS, 2012).

When I first started working with the BOPF almost a year ago, I was surprised at how little documentation there was to get started with. So, what you’ve seen in this series is the result of a lot of trial-and-error and lessons learned by debugging past application-specific frameworks into the heart of the BOPF itself. If you’re just getting started with the BOPF, then I hope that you’ll find this series useful to get you up and running. In the coming months and years, I think many more learning resources will materialize to supplement what I’ve offered here. Indeed, the number of new dimension applications based on the BOPF appears to be growing by the day…

One complaint I sometimes hear from other developers is that the BOPF API is cumbersome to work with. On this point, I can agree to a point. However, I would argue that such complexities can be abstracted away pretty easily with a wrapper class or two and some good old fashioned RTTI code. Other than that, once you get used to the BOPF, I think you’ll find that you like it. And this is coming from a developer who has had many bad experiences with BO frameworks (both in and outside SAP…curse you EJBs!!!). All in all though, I have found the BOPF to be very comprehensive and flexible. For me, one of the feel tests I normally conduct to gauge the effectiveness of a framework is to ask myself how often the framework gets in my way: either because it’s too intractible, limited in functionality or whatever. I have yet to run into any such occurrences with the BOPF. It does a good job of providing default behaviors/functionality while at the same time affording you the opportunity to tweak just about everything. For example, if I want to build my own caching mechanism, I can do so by plugging in my own subclass. If I want to pull data from a HANA appliance in real time, I can do so in a determination. You get the idea. It’s all there, so just poke around a bit and I think you’ll find what you need. 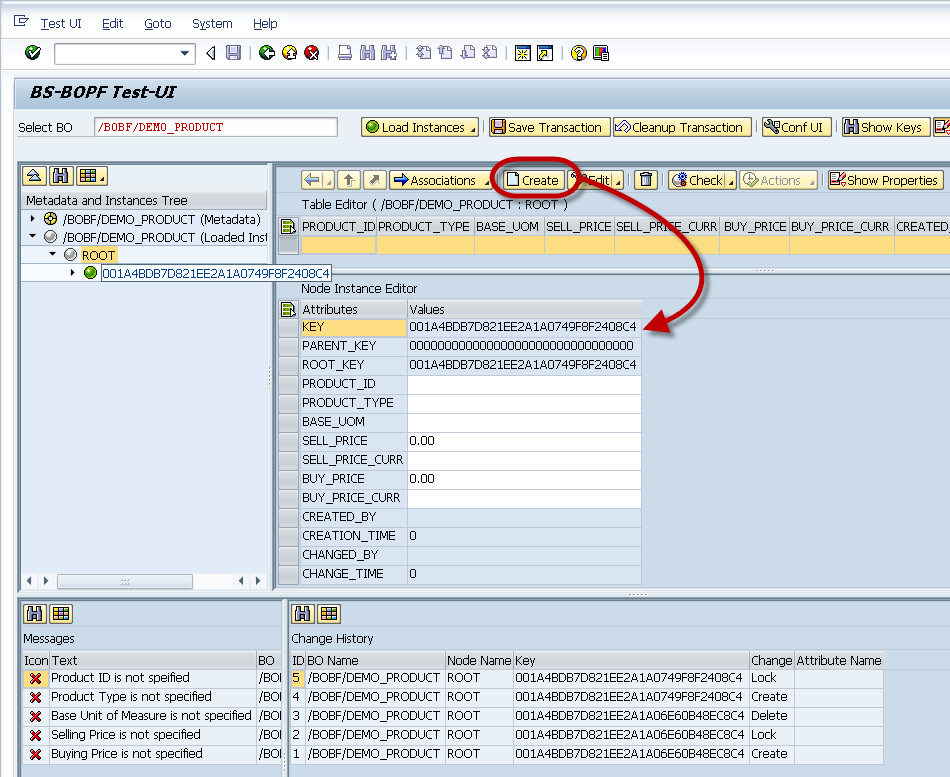 its very nice series of blog.Now i hope the BOPF stuff is available in SCN with your contibution !

I should thank and appreciate your efforts for preparing such blog series. I just started with SAP TM and BOPF. I am in the same situation now in what situation you were 1 year back.

But your blog is really helpful. Although it is very difficult to understand and digest in the first read but i hope over and after some period there will be some improvement in understanding..

It was very nice blog. Now, I hope the BOPF stuff are avaible in community..

It is Really Good James..

Its really very good stuff and I encourage who ever comes on my way to work on BOPF to refer your blogs with any doubt.

As on date, this blog is the priceless source of Information on BOPF.

great article. It has changed my opinion regarding the BOPF framework (more or less).

Do you know a way to convert the bopf-key to a readable name during debuging? Search it  in the constant interface is disturbing.

Unfortunately, no. This is a pain point for sure. Sorry I don't have a better answer for you.

Have you ever got change documents working in the BOPF with external keys?

Having an external ID in the change document log would be lovely.

The code seems to be looking in table TCD0B which I think is the SCD0 and then seeing if the entry is a table type as opposed to a transparent table. Only then is the GET_EXTERNAL_ID called. If this is true then you have to define your Z table type with a really short name, as the SCDO transaction still thinks we are in version 3 with a limit of 16 characters on DB table names.

I've used these callback classes as a hook for triggering downstream interfaces, but I've never tried to implement a scenario like what you're describing. That being said, have you tried setting a break-point in the PCASBGDTCRD_GET_EXT_IDS() method of class /BOFU/CL_CHANGE_DOC_HANDLING? It looks like this is the launching point for the external ID handling. Maybe you can glean some insight from there (or see how you might enhance the framework to support what you're looking for)?

What I did was go through the steps in the official SAP help to set up the change document adapter for my custom business object i.e. attach the standard BOPf change document object as a delegated object.

This works fine, entries appear in CDHDR/CDPOS, but with the GUID. It is no big thing to get the proper ID i.e. a number a human can relate to based on the GUID but the SAP help says that you can redefine the method ion the callback class, and there is an example in the demo customer callback class, not that the demo customer business object actually works for change documents (does not have a change document delegated object).

In the /BOFU/CL_CHANGE_DOC_HANDLING nothing gets triggerd unless the flag MV_KEY_EXTID_MAP_REQUIRED is set to ABAP_TRUE. this gets set in the CONSTRUCTOR if MV_KEY_TO_EXTID_MAP_STRUCT is not initial.

This value in turn is created during ,ethod INIT_CDO_NODES_AND_TABS. this method looks at the entries in TCDOB for the object class. I think TCDOB is the table where the entries in transaction SCDO are stored.

The method loops through the entries in TCDOB looking for an entry which NOT a transparent table e.g. a structure, in fact i think it is looking for /BOFU/CDTEXTID specifically. Then that structure gets analysed and the program decides if the first include is /BOFU/S_CD_EXTID_KEYS. if this is true, then the MV_KEY_TO_EXTID_MAP_STRUCT variable is filled.

I will have a go at playing with this, probably adding /BOFU/CDTEXTID to SCdO for my custom object and then do some more debugging.

There also does not seem to be any standard way to get the CDHDR/CDPOS entries back outside of the WDA/FPM environment. What if you wanted to use this with UI5 or whatever comes next after that?

Now i get two entries in CDPOS, both with the GUID as the OBJECTID, but one of them has /BOFU/CDTEXTID as the "table" being changed and that entry contains the external ID.

I am really happy bunny about getting this working, if the SAP help had just told me waht to do it would not have been anywhere near as much fun!

Nicely done and thanks for sharing. This will be a nice little tip to keep in everyone's back pocket going forward.

P.S. I find that SAP provides us with plenty of opportunities to have the kind of fun you're describing. Nothing else is quite like it. 🙂

It was a lovely experience looking into these.
I am very new to BOPF and successfully had an overview Idea.