VIDEO: Cities Use SAP Mobile and Big Data to Help with Urban Matters

“Cities are like human beings,” SAP’s Judith Magyar wrote from Mobile World Congress Wednesday. “Each individual person, or city, is unique and special in its own way.”

“Our cities are built on systems as complex and manifold as our dreams,” an SAP video serenely said. And that’s a good point. While cities may not places where we inexplicably go to school in our underwear, “they face ever-growing challenges in administration, finance, public safety, infrastructure and supply.”

And those five components depend on working within these five high-tech arenas:

Luckily, SAP has mastered all five. Together with the five components on which Best Run Cities build themselves, SAP can help cities run “five by five.”

“Five by five” was originally two-way radio parlance for signal strength and clarity (i.e., “loud and clear”) — and later used in the 1986 sci-fi classic Aliens to forecast smooth atmospheric entry from space. Now “five by five” is the mainstay of SAP Urban Matters.

Public sector software is one example of how SAP can help cities improve the performance of their policies, operations and programs. These solutions feature integrated secure information sharing to increase fiscal and operational efficiency, while making it easier for citizens to connect.

The Connected City at Mobile World Congress this week in Barcelona showcases SAP Urban Matters’ vision of collaboration, in which houses are smart, transportation is innovative and mobile technology meets the needs of citizens and businesses. But cities won’t get there spontaneously, as SAP’s Magyar noted

“A city can’t be smart,” one conference goer told her. “That’s up to the citizens.”

“How to Convert a Small City Atheist” in SAP Business Trends

“SAP Urban Matters: Improving the Lives of Citizens through Better Government” on YouTube 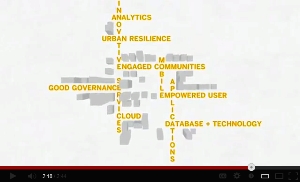