How to Convert a Smart City Atheist

I’m in Barcelona at the Mobile World Congress, along with 80,000 other people, all of us eager to explore new mobile horizons and find out what’s smart. For starters, if you’re not connected, you’re not smart. To learn more about connectivity, the crowds gravitate towards the Connected City exhibit in hall 3 where a real city street has been erected in the heart of Gran Fira. Here you can find out how homes will be smarter, city and transport networks will be optimized and how the needs of citizens and businesses will be met in the brave new mobile world.

Making a city smart is a formidable task but crucial to the evolution of how we will be living in 2030 when 5 billion people will be urban dwellers. A panel of experts, including Manel Sanroma, the CIO of the city of Barcelona, has been assembled to talk about the future of cities. While the other panelists are passionate about their visions of how cities will be connected and made more efficient by mobile devices, Manel proclaims himself to be a smart city atheist.

“I don’t believe in smart cities,” he says. “A city can’t be smart; that’s up to the citizens.”  But he does believe that cities are like human beings. Each individual person, or city, is unique and special in its own way, yet they all share a common anatomy. Just like all humans have one heart pumping blood through a circulatory system, all cities have an infrastructure that includes roads to transport people and goods and systems to distribute water and energy. A country’s borders may undergo changes, but a city is shaped first and foremost by its environment. Barcelona has been around for over 2000 years because of its strategic location on the Mediterranean Sea and will be around for another 2000.

According to Manel, cities, meaning citizens, first need to convert themselves into customers with an identity,  a vision, and a roadmap, all shaped by their environment, and not just buy up every new thing that pops up on the market. While one city may be interested in installing videos to catch illegal garbage dumpers, another will cringe at the notion of filming citizens without their knowledge.

One way to convert a smart city atheist could be to help cities make smart technology choices based on their consumer identity. “Like human beings, a city needs to know its own user profile,” says Barbara Fluegge, who heads up smart logistics research projects at SAP. “Its own user profile determines whether a city is smart or not!”

What works for a Mediterranean port city may not work for a delta port like Hamburg.  Central Europe’s main port for centuries, Hamburg, like Barcelona, will survive for future centuries thanks to its strategic location, but only if takes action today. Alarming traffic congestion around the port and restricted road capacity are part of Hamburg’s user profile. Needing a smart way to deal with growth, the Hamburg Port Authority (HPA), joined forces with Deutsche Telekom and SAP to create a logistics IT solution designed to connect port-based companies, partners and customers more closely.

The Smart Port Logistics project resulted in a comprehensive IT platform that incorporates mobile apps and makes it possible for traffic information and port-related services to be accessed from mobile devices. And it’s not just for citizens of Hamburg! These technologies can transcend geographies! Truck drivers heading from Hamburg to Barcelona serviced by Deutsche Telekom will automatically continue accessing their data through local providers as they drive across France and Spain.

So converting smart city atheists may be a matter of having more good examples of people working together using state-of-the-art technology to manage logistics and other urban tasks more efficiently, saving time and money for everyone. It takes smart citizens today to build the smart cities of the future!

How SAP Helps Manage a Megacity 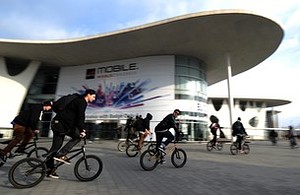 Bespoke solutions may indeed be the best way to attract individual municipalities to smart-city technologies, Judith. Were you able to convert Manel Sanroma?

“A city can’t be smart; that’s up to the citizens.”

For me, this really hits home. Smart cities, sustainable cities...they don't magically create themselves out of thin air.