Not everyone is a Downton Abbey fan, but the lessons from the immensely popular early-20th century British family drama series that just finished its third season in North America, are relatable, regardless.

Be Open to Change – WWI, the Influenza epidemic of 1918, global migration and social upheaval have forced the family and staff at Downton Abbey to adapt or be left behind, literally.  Convert the drawing room to a soldier’s convalescent home, marry the chauffeur, and open your kitchen to the disenfranchised.
Citizens and governments are under similar pressures from the digital world — to transform or risk being left behind.  Newsweek is no longer on the bricks and mortar newsstand as of October 2012, Wikipedia boasts over 29 million pages of content and availability in 20 languages, all since its creation in 2001, and my iPad, home and work computers are all close to capacity with applications, documents and data – many of which I may never get a chance to utilize.  With the proliferation of digital data and information, what is a data Lord or Lady (read “consumer”) to do?

Explore open data sources.  There is a wealth of untapped data that can be leveraged to solve problems and answer questions. Explore it, ask questions and try to find the answers.  Jack Andraka, a high school student from Maryland, US, used Google searches and some applied thought to detect a new test for pancreatic cancer that won him the 2012 Intel International Science and Engineering Fair’s top award and gave him a patent pending. 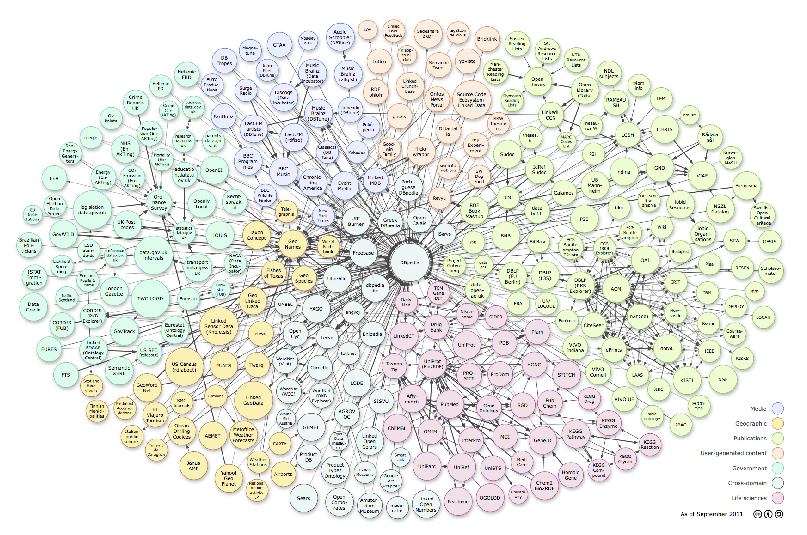 Linked Open Cloud (or, perhaps, a peony from the Grantham Flower Show?)

Everyone Has a Role – The drama at Downton Abbey would not be half as appealing if it were not democratic, the stories of the gentry and their devoted employees get a similar amount of airtime and are treated with equal respect and empathy (Mathew + Mary = Bates + Anna).

A 15-year old high school biology student can have an important role to play in cancer detection and  a new city resident can help City of Edmonton citizens navigate road construction with a home-grown free mobile application.  See the SAP-sponsored white paper from the Center for Technology in Government for more information on  how Edmonton Road Construction app was developed.

Creative Problem Solving – When the oven breaks down, serve cold food in the dining room buffet-style, use curtains to make clothing – or was that Gone with the Wind – or The Sound of Music?

RinkWatch is a site developed by the Geography and Environmental Studies Department at Wilfrid Laurier University in Canada that is tracking the daily skate-ability of backyard ice rinks across North America in an effort to gain visibility at a local level into climate change.  This is community-based, real-time science.