Transitioning Between 3.0 and 4.0 in Visualization Solutions by Nakisa

In November 2012 Nakisa released the latest version (4.0) of their visualization product suite and with it a number of changes to the availability of modules, nomenclature and licensing.  In this post I’m going to outline some of the importance of these changes in an attempt to try to help translate between versions for anyone who might be considering upgrading  or applying unused existing licenses (shelf-ware).

EDIT: In April 2013 Nakisa released 4.0 SP1.  This included a name change for OrgManager (to TeamManager).  A set of updated diagrams reflecting this can be found in the 4.0 SP1 addendum document for this blog post.

The diagram below shows the modules available in SAP Visualization Solutions by Nakisa 3.0 and 4.0. 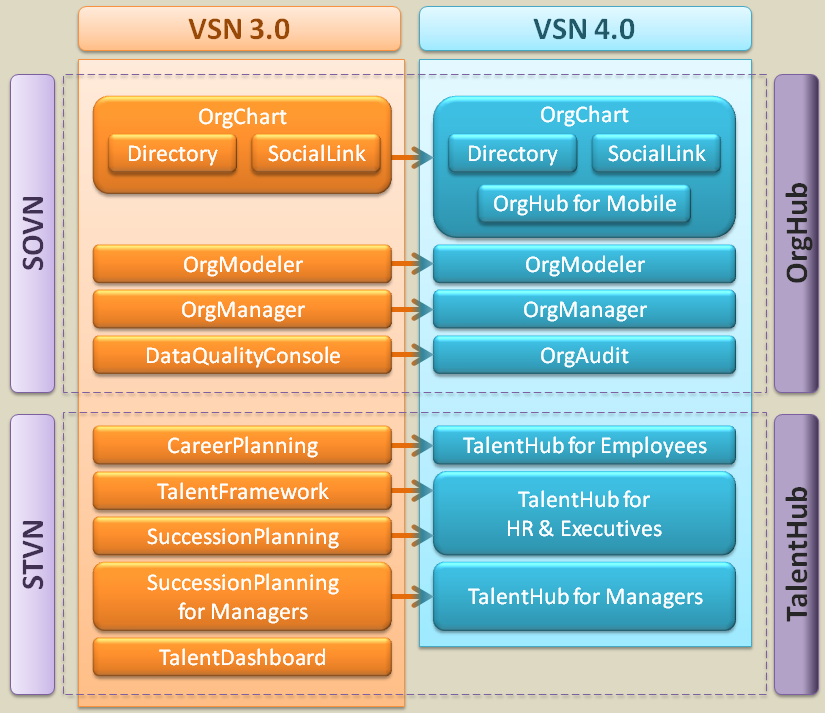 I’m going to start at the bottom of the diagram with the STVN modules.  The 3.0 modules have now been consolidated into three “TalentHub” modules.  Each of these modules is aligned to a particular role – employees, HR/executives and managers.  This alignment makes it much easier to see who particular modules are targeted at and in the case of TalentFramework and SuccessionPlanning brings them together into a single module.

TalentDashboard however has in effect been decommissioned as a result of this consolidation. The advances in the other modules however I think reasonably address this deprecation.

Within SOVN there are also two notable differences.  The first is the introduction of OrgHub for Mobile , a new sub-module within the OrgChart module.  This is significant not only in the fact that it is the first mobile solution offered by Nakisa, but also in that it is the first to be pre-fixed with “OrgHub”.  Unlike the STVN modules, the SOVN modules have not been consolidated and aligned to particular roles.  But from references to “OrgHub” in a recent 4.0 delta training course  and the change to STVN in mind it seems almost a certainty that we’ll see some sort of “OrgHub ification” of the SOVN modules occurring in the not too distant future.  For now though “OrgHub” is not seeing as much use as “TalentHub” as a collective term for a set of VSN modules.

The second difference within SOVN is the renaming of the DataQualityConsole module to OrgAudit.  I’m unsure as to any particular significance to this renaming other than it probably conveys the purpose of the module a little better and changes it from something that to me sounds a little more action driven (auditing) rather than something that sounded perhaps more passive.  If Nakisa are moving to the use of “OrgHub” I’m surprised they made the effort to rename this module at this point, but perhaps it just makes better marketing sense?

Along with the change in the modules there have been some changes in the licensing.  In 4.0 there are five licences that organisations can opt to take up.

The licensing around the TalentHub modules is a simple one to one relationship though OrgModeler is bundled with the Talent Planning licence.  On the organisational side of things all of the applications are available under Org Planning, but OrgChart is also available under its own separate OrgChart license as well.  So all in all a nice simple model.

Comparing this 4.0 licensing back to the module and licensing in place for 3.0 we can see that there have been a number of changes.

This second point should make it much easier to meet the licensing needs of managers without going overkill on licensing for other modules which managers would not typically be given access to.

So how should you work out the 4.0 licensing requirements?  Well the diagram below tries to show how you might review your requirements based on the roles, licensing and available modules. 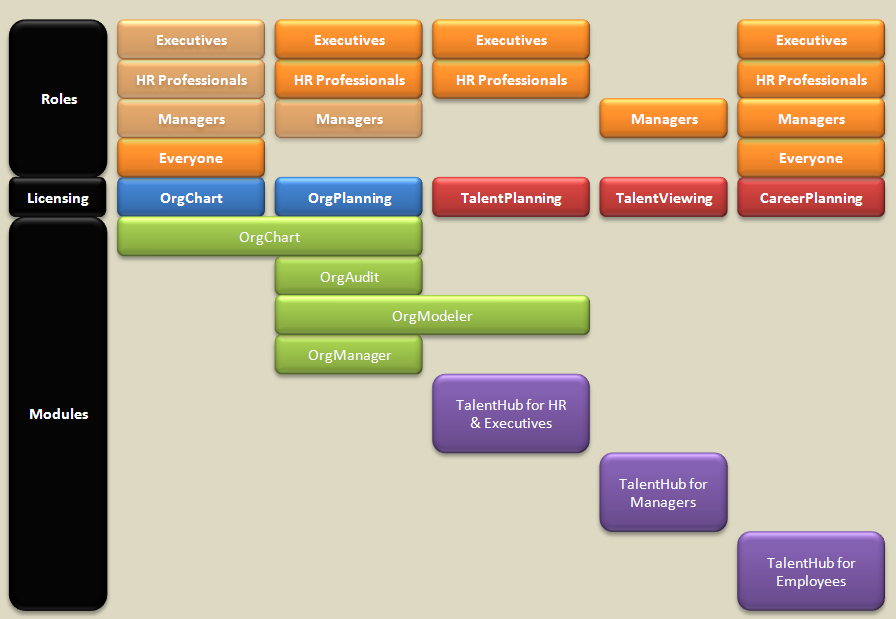 Of course overall you may not wish to obtain licensing for every application.  Perhaps you just wish to deliver structure charts to managers or give HR some extra tools to improve data quality?  Maybe your focus is entirely on Talent Management?  Whatever the scenario simply mix and match the modules to the roles and derive your licensing from that.

There is of course one notable exception to this licensing that some of you may have picked up on.  OrgHub for Mobile is not currently included in any of these licences.  The licensing for this sub-module is achieved through a nominal one off fee per user with a pre-requisite being that you would have the equivalent licensing for OrgChart in place as well.  OrgHub for Mobile is an additional access channel with an additional access channel licence cost.

To licence and enable OrgHub for Mobile simply contact Nakisa  or one of Nakisa’s implementation partners to discuss your requirements.

In addition to the new functionality, 4.0 has brought with it a number of interesting changes around the structuring of the modules.  There is an emergent approach to rationalise and align the modules to end user roles which should make it easier for organisations to quickly identify the licensing they require to meet their organisational and talent visualisation requirements.  Whilst the licensing options have in fact increased from version 3.0 to version 4.0, this has been in an effort to simplify selection and provide an improved match (i.e. fewer licences) to typical sets of requirements.

I recommend the following resources for anyone looking to upgrade any existing pre-4.0 VSN modules.