OrgAudit (also referred to as DataQualityConsole) helps HR professionals to visualise data errors with the aim of pro-actively fixing data before they impact the business.  It is one of four modules in the SAP Org Visualization by Nakisa (SOVN) solution extension.

This blog is an introduction to what OrgAudit is, and looks at the history as well as the reasons to use OrgAudit.  Follow up blogs will look into building a business case, more detail on the currently available functionality, how to approach an implementation from a technical perspective and thoughts on how it might evolve in the future.

I believe OrgAudit offers strong, widely needed but under-utilised functionality.  In over 14 years of working with SAP organisations I regularly meet organisations who recognise a weakness in the quality of their HCM data.

Realising the opportunity, Nakisa developed the concept into a standalone module which was released as part of SOVN version 3.0 in September 2010.

During the three 3.0 service packs the product evolved slowly as Nakisa worked closely with a small set of customers to assess how they used the product and what additional features they might benefit from having included in the next version.  One such customer was Japan Tobacco International who spoke about their experiences at SAP HR 2012 (both in Las Vegas and Milan). 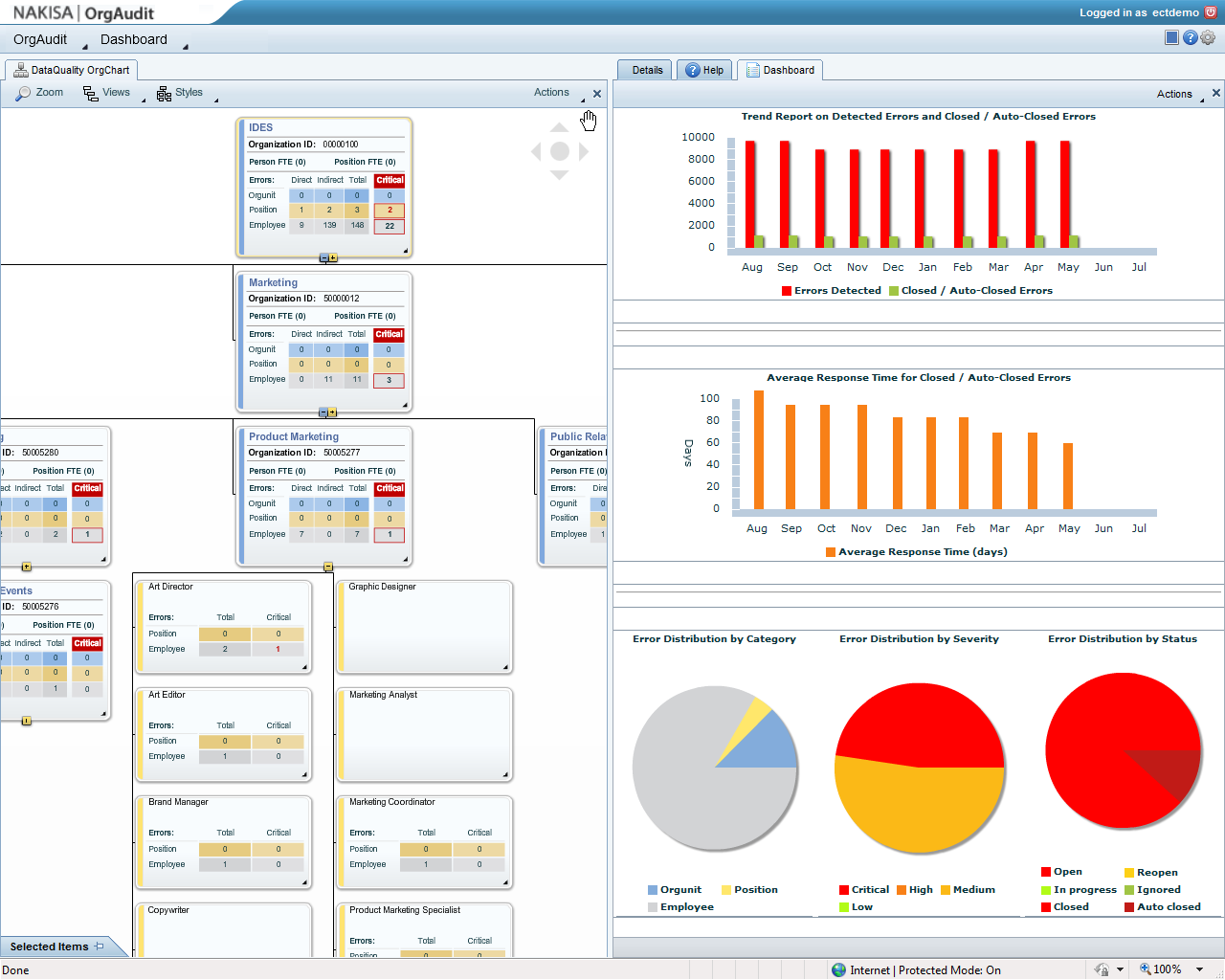 Tip: You can click on any image to view it more clearly in a pop-up.

OrgAudit extracts HCM data from SAP to analyse the data quality by applying quality assessment “rules”. The application is delivered with 48 rule templates which can easily be activated for immediate use.  These rules cover Personnel Administration (PA), Organisation Management (OM) and (one rule for) Compensations Management (CM).

An example of a (PA) rule template is the rule to check each employee’s age.  The rule uses their date of birth to calculate their age and reports an error if their age is below 18 or above 60 (these values are configurable).

As well as using the out of the box rules templates, you can also create your own rule templates.

End users access the application via a web browser and on first glance it is almost identical in look and feel to OrgChart.  The main difference is in the type of data shown.  For example you still see an organisational structure (org units to org units to positions and their incumbents) but within each org unit there are statistics on the number of data errors found within this point in the structure and below.

Users can view different statistics by changing views. There are two main types of statistics:  number of errors, and score (with several sub-types of each).

In addition, OrgAudit can help advise you on how to resolve each type of error and track the progress in resolving errors over time, both at an individual rule level as well as rolled up to a variety of levels (e.g. by company code, personnel area). OrgAudit is used by SAP HCM customers that recognise that data quality is either currently an issue or understand the impact that poor data quality will have on them in the future (e.g. in the run up to a reorganisation).  It enables the HR team to monitor the quality of data in different parts of their organisation – by organisation unit, company code or personnel area, for example.  These can also be tracked over time; whether you use this as a stick to beat, or a carrot to encourage, is entirely up to you!  HR staff can become more effective by transitioning from spending significant quantities of their time fire fighting and checking data causing issues in processes, to spending their time pro-actively correcting it.

HR data quality is also important in terms of building the credibility of the HR function. Credibility takes a long time to build, but can diminish very quickly when users are confronted with missing or inaccurate data.

Yes to some extent, but you can do more!

It is true, without doubt, that the most implemented module in SAP/Nakisa’s visualization suite is OrgChart and while I think having visibility of your organisation can in itself lead to an improvement in data quality, I think most organisations are missing an opportunity to make an even greater difference.

OrgChart is an important step, because it is designed to be used by all employees which results in more people able to “see” data errors and omissions, both in terms of data fields, but also with regards to keeping the structure correct (i.e. people highlighting that person X doesn’t report to person Y).  OrgAudit goes a step further by applying rules to find errors without you having to look at them, or more importantly, before they cause you an error which then costs you time and money.

That’s it for now, but in subsequent blogs I will take a look at:

This is a nice overview on one of Nakisa's under-utilized applications that has such a critical impact on SAP HCM. So many business processes rely on having a sound data foundation and I'm surprised by how many customers I have worked with have installed OrgChart and noticed that data is wrong. I'm even more surprised about how many customers I've worked with for Talent Management processes are making decisions based on bad data - and how little they know about the quality of their data! Therefore it makes perfect sense for OrgAudit to be a core solution in any SAP HCM strategy.

On a side note, the applications is still called DataQualityConsole and has not been renamed, rather it is also called OrgAudit. DataQualityConsole is how it will appear on the SAP Master Price List although from SOVN5.0 it should be re-branded as OrgAudit by SAP and Nakisa. This is detailed, along with the new 4.0 features in the application, in the blog What's new in Visualization Solutions by Nakisa 4.0

I know that some clients have given you some specific feedback on OrgAudit that will no doubt be incorporated into the future posts on building a business case and potential improvements, but I wondered if you could share any high level feedback at this point on what things have particularly impressed clients about the application?  For example is there any particular feature where clients have been visibly excited by the potential or an area of the user interface which has proven to be particularly intuitive to use or well presented?

I'm sure everyone would be interested in any direct feedback from any OrgAudit users who may be reading this too.

Also from your perspective is there something that's particularly impressed you with the opportunities it provides or the way in which it is delivered?