Recently SAP and the NFL partnered together to help bring fans and media closer to the game. During the Super Bowl, SAP showcased this partnership in several different ways, one being the SAP NFL Media Center Experience. So what is it all about?

What is it: The Media Center Experience was aimed at giving the media the next level of analytics in football. Leveraging situational analytics, the media center experience allowed users to go beyond simple stats like win/loss and into much deeper analysis like player and team tendencies on specific down.

As you can see below, the touch screen was built to be intuitive and to enable any user to freely drill down to the team, player and situation they were looking for by selecting the options on the right and left of the screen. Starting out at a high level you can see those aforementioned stats like win-loss and total points scored vs. allowed. You can then go further down to select specific positions like QB and then even further to
select the actual player. 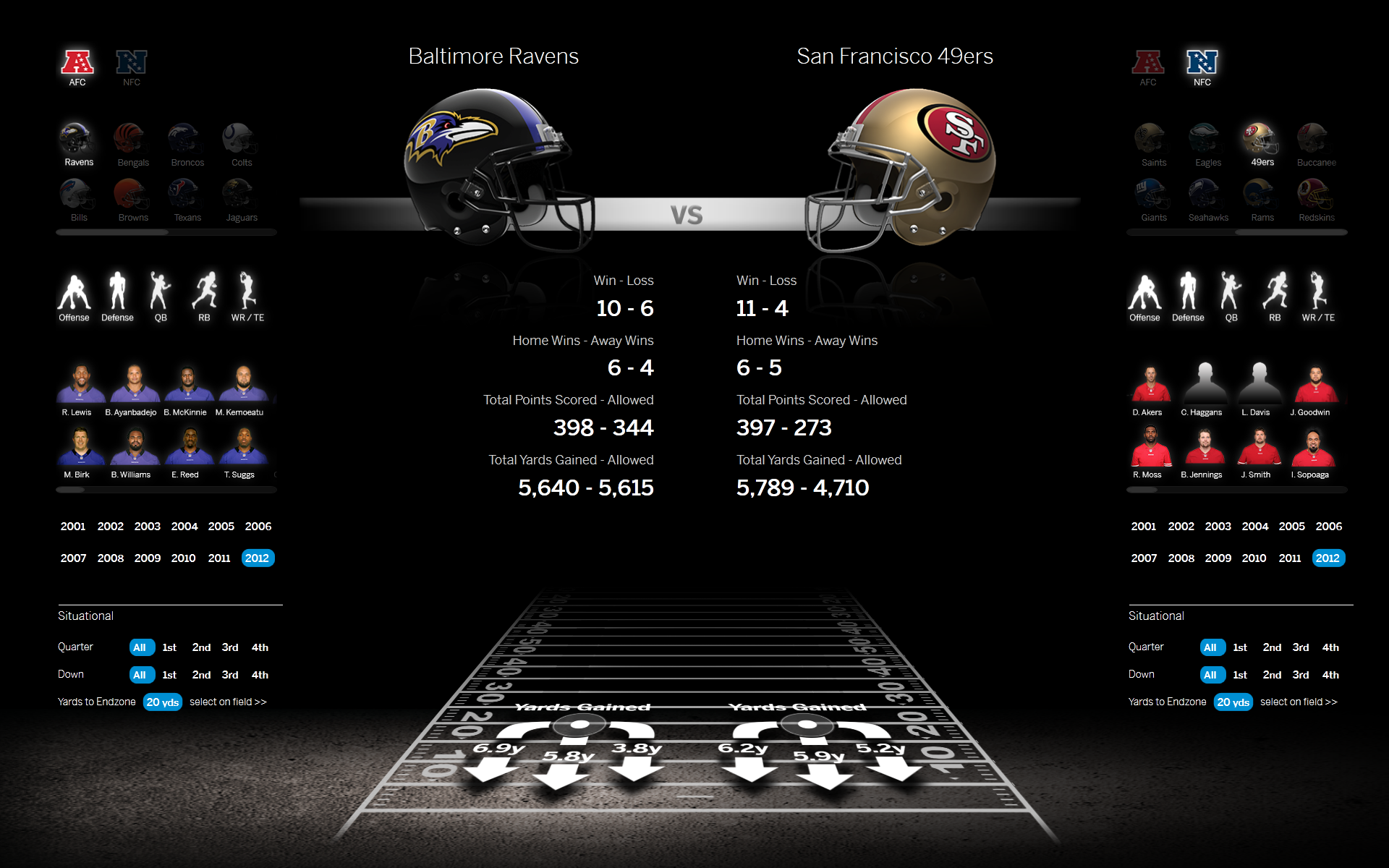 Why is this unique: While the graphics and touch screen are enough to keep an avid football fan entertained, the real impact is when you drill down into specific situations to find strengths and weaknesses for a player or team. Take the below instance for example, you can see on the field below the average yards gained from the 20 yard line by each team and the different direction’s they are stronger towards. This marker on the field can be slid up and down the field to see how the tendencies change depending on the yard line. You can see that the New York Giants Quarterbacks are much better from the 20 yard line with higher completion percentages than the New York Jets. You can also see that the New York Giants Quarterbacks are more successful to the left side while the Jets are a bit better to the right side. No current solution in the NFL allows users to get down to this level of detail to see specifically how each team or player performs in these specific situations. What is its impact: As stated above, this type of in-depth analysis has never been done before. Now media members will be able to understand and predict player and teams tendencies before they happen. Going even further; teams and coaches can now scout their opponents and prepare their game plans according to what the team’s tendencies are. Imagine a world in which the head coach of a team can have a mobile tablet on the sideline with this type of touch screen solution to understand exactly what their opponent will do on the next play given things like the yard line, quarter and specific down. That possibility is not far away and the first glimpse of it was at the NFL Media Center.

How was it built: The Digital Experience team built the custom application by using a combination of statistical data as well as the play-by-play data. The team took the play-by-play data and after parsing it, stored this all on HANA to allow the application to quickly sort through each of the teams and players tendencies. Because of this, users can scroll across the field and see the numbers change automatically as they motion over it.

Reaction: The Experience application was amazingly well received from fans, media and teams alike. Multiple NFL teams were interested in how they could leverage it, media members wanted specific situations that they could use that day for their coverage, and one aspiring eight year old even wanted to know “How much the video game cost so his parents could buy it for him” – SAP: So easy an eight year old can use it. I think we are on to something

How easy would it be to reuse the platform for any other sport? For example, the NBA.

For the showcase historical data has been used. The original concept included real-time data from the Super Bowl. But since the application was mainly used in the media center in the week leading up to the game, this feature was not implemented.

In general a concept like this could also be also used for basketball, baseball, cricket or even soccer. This particular application is rather specific for football though. Especially the situational analysis builds on the fact that football is divided into distinct plays, that are clearly separated.

I just noticed that the NBA stats pages provides something similar - just click on the "Play By Play" tab.

This particular application is rather specific for football though. Especially the situational analysis builds on the fact that football is divided into distinct plays, that are clearly separated.

Interesting point about the "distinct plays" aspect in football - innings in baseball might be the closet thing to it in another sport.