As an ABAP programmer we are many times in need of Test Data and the functional consultants are normally offshore and busy. The  result is mail trail which is really time consuming and for every test data developer is dependent on functional consultant.
They show us how to create a Test Data using Team viewer  ,Office Communicator etc

This tool is meant to automate the Repetitive Tasks …

SAP GUI Scripting is an automation interface which  is available in SAP. It enhances the capabilities of SAP GUI.

Using this interface, end users may automate repetitive tasks by recording and running macro-like scripts. It is

shipped with SAP GUI 6.20 and later versions and compatible with all R3 versions currently supported by SAP and

Ask the User to Record the Test Data Session as Follows 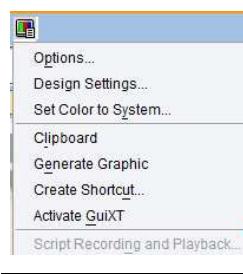 3.   Click On More Button. Enter the FileName as as required and then click on Record button to start recording the Script.

4.    Ask The User to Create The Test Data  and Script will Keep recording the same.

5.    Once He is done ask Him to Click on the Stop Button

6.    You can use This VB script file  and press play button  and create as many Test records as possible

7.    Yes and If you want to send this VBS file to anyone just Rename and save it as .Txt file as Ur email  severs and firewalls  may block script file

8.    Yes VB scripts are faster way of Doing repetitive Tasks You Can also Interface this Excel File and fetch the Data from Excel It may require little knowledge on Excel Or VBS Side

Technically this a ver usefyl thing, but I have a few comments to make here, just about developer testing in general.

At my company we are very lucky (and I expect very rare) in that the vast majority of the IT team, programmers included, were drawn from the business, at the time of the SAP project in 2000 (we are all still here, maybe that says something about my company).

It has been observed you are never going to really be bale to program the business requirements correctly without having at least a fair knowledge of the "domain" i.e. can understand the business process, why the problem is a problem, and how it affects the business process as a whole. This means you have to have functional knowledge to at least a basic extent, when a developer struggles to create a sales order that is bad for everyone concerned.

At my company all IT staff have to visit the field and sit with the end users for a day at least once a year, preferably three times.

I understand that many companies think that sepearting the functional team and the programmers to the other side of the world with a twelve hour time difference is a Really Good Thing because it is cheap, but this is an example of "penny wise pounds foolish". I deal with a company who sacked all their USA IT staff and outsourced to another country in a somewhat different time zone, and the results for us, as a customer, are horrifying to say the least.

It's not even fair on the poor old programmers in the outsource orgainsation, because, as you say, you have no idea about the business and the functional people are never there.

My recommendations are HPQC and the ABAP Unit framework. Easy for me to say you might think, both those things cost money in the first case, and time and effort in the second case. But I can tell you from first hand experience they are worth it, the first one pays for itself if used properly after, admittedly quite a high set-up effort, the second pays off almost at once, given the programmer understands the concept of unit testing.

This is very useful tutorial, now we only want single record for recording, and don't require to ask functional people to create more test data. we create it quickly as per the recording.

Thanks Gaurang, This will really helpful as a Technical as well as Functional point of view.

Thanks Gaurang for showing option.