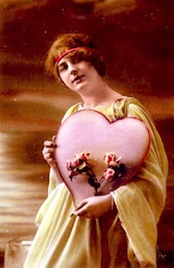 Whether Valentine’s Day sizzles or it fizzles, SAP technology – ubiquitous behind the scenes – plays a role in the romance ritual.

The first recorded association of Valentine’s Day with romantic love is a verse about mating birds in the poem Parlement of Foules, penned by Geoffrey Chaucer in 1382.

Fast-forward 400 years to Victorian England. By this time, it’s common for friends and lovers to personally exchange handwritten notes on V-Day. Around 1900, The DIY Victorian valentine was supplanted by mass-produced cards delivered by mail. Made salable, the holiday quickly caught on in America, where, in typical fashion, it morphed into an occasion dedicated to two national pastimes: buying stuff and getting stuff.

After World War II, it became customary to exchange not only cards, but gifts of chocolate and flowers. Commercialization of the holiday was complete when, in the 1980s, the diamond industry began promoting Valentine’s Day as an affair commanding the purchase of fine jewelry. In 2013, roughly a billion valentines will be exchanged in the America – so says the U.S. Greeting Card Association. Progress marches ever onward with 62 percent of couples planning to also spread the schmaltz via text message or social media, according to a survey conducted by American Express.

Now that you know fornicating fowl gave birth to the most romantic of days, it should seem less wacky when I posit that SAP may well be the most underappreciated ‘wing-man’ in the history of courtship – figuratively of course. Indeed, our technology hums quietly behind-the-scenes of many things people do when they woo.

Will you be giving your Valentine chocolate? (If you’re sweet-nothing happens to be a five-year-old child, you’d better be.)

While some ‘experts’ caution that a guy buying perfume for his lady-love is ‘a big, big risk,’ it remains a popular Valentine’s gift.

Should they deem the perfume counter frightful, roses passe, and chocolate a certain precursor to “Do I look fat?” savvy suitors can gift the four-and-a-half-foot tall Big Hunka Love Bear, a bold repositioning of the time-honored stuffed teddy. No longer just a fluffy friend for the age-of-innocence set, this big-boy is a powerful aphrodisiac! His message? Size matters.

~SAP customers produce more than 60 percent of the world’s toys and games.

It bears mention that, no matter what you buy for your beloved, it can likely be traced in some way to SAP technology.

~SAP systems touches $12 trillion of consumer purchases around the world. (That’s 12 million million, or 1,000 billion, for those of you inured to how absolutely humongous that number is.)

Assuming all goes well with your gift, you and your date may head out for a romantic, candle-lit dinner.

~SAP customers distribute more than 71 percent of the world’s food.

Driving to the restaurant, or taking a cab?

When the maître d’ refuses you entry due to your casual dress, lament that you ran over your Zenga suit-pants with your Lotus – like, five minutes ago – in front of The Gap.

Revel in your ‘save’ later, while sipping an espresso at a corner table.

~SAP customers produce 65 percent of the coffee and tea we drink.

Playing it cool, you wait three days post V-Day to text your date, who is miffed, and has moved on.

Now the the only thing you’ll be cuddling on Saturday night is your dog.

Come the weekend, you take to the couch alongside Fido and watch zombie-apocalypse movies for 36 hours straight – which is, you know, perfectly okay.

~SAP customers produce more than 65 percent of the world’s televisions.

Wistfully recall the roast duck with cherry-reduction you savored on V-Day as you partake in your third consecutive meal of Rocky Road washed down with a beer.

A cautionary tale, folks – Valentine’s Day is for the birds.

Thank you for sharing such novel ways of looking at Valentine's Day, Jennifer! You've either got quite an imagination or you've enjoyed some very memorable Februaries.

God research there!  Its enjoying to hear something else than bragging that companies just try to make money. I wish I had some more memorable Februaries....14 Feb should be in Juli when people are more open and have less cloths, or why not every day...we should love each other every day 🙂 ....and eat chocolate.