What’s the one thing Russian vodka, TVs, jeans, movies, chocolate and cheese have in common? 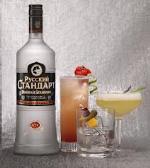 They all touch SAP software. SAP may not be a household name to everyday consumers, but its software directly impacts billions of people. That’s because SAP’s customers represent 85% of the Top 100 most valued brands in the world. These renowned companies:

SAP is ubiquitous, innovative, and dare we say it, trendy. Ilya Blinov, Managing Director of Russian Standard Vodka, says all this and more:

“SAP is a modern, and even trendy thing now. It’s as important to a person these days

as a tablet or a mobile device that you have to have with you all the time.”

For all of Blinov’s comments, as well as a snapshot of SAP’s commitment to the Commonwealth of Independent States, watch the video here. St. Petersburg-based Russian Standard Vodka relies on SAP CIS to help with global expansion. This is just one example of how SAP software helps power some of the fastest growing economies in the world, even during a time of global economic uncertainty. SAP was the first foreign company to bring enterprise software to Russia in 1992. Today, SAP’s partner network is 20,000 strong and it has offices across the region.

Misconceptions about what SAP does abound. Here’s the straight story—abbreviated. SAP pioneered the first integrated, back-office enterprise resource planning software in 1972. Today, it has spearheaded the adoption of in-memory computing to harness the power of Big Data, is running full throttle towards cloud leadership, and has the only comprehensive mobile offering on the market.

These technologies are transforming how companies do business in ways no one has ever thought of before. Indeed, it’s impossible to predict how advanced technologies will ultimately change everything. One thing is clear. Real-time business processes help us eat, drink, work, drive, relax,  fly, and live more sustainably. That’s something everyone can be proud to have in common.