Picture this:  you drag your weary body onto a plane and fight your way through the aisles, only to flop into your seat to find your personal console screen looks like someone smeared peanut butter all over it.  You try to wipe the screen but it appears as if the screen is permanently cloudy so you begrudgingly move on to try to find what movies are playing.  You touch once, twice, three times.  You start jabbing the screen in front of you like a maniac until you hear the person in front of you start to complain.

Does this experience sound all too familiar?  I learned from visiting startup Baanto last week that the cloudy screen and unresponsiveness from my previous illustration are all symptoms of worn-out resistive touchscreen technology.  The other type of touchscreen technology is called capacitive (think iPhone).  While I have no complaints with how my iPhone responds to touch, how expensive do you think this kind of touch technology is when you increase the screen size to say, a size of a monitor?  How about a 52-inch television?  The answer is of course highly expensive.

So with these, and a lot of other resistive and capacitive touchscreen technology tradeoffs in mind, Baanto set out to solve the touchscreen problem with a new kind of technology.  And what was their innovation inspiration?  An ancient well known technology called the sundial.  In layman’s terms, a sundial tells time via the shadow cast by the sun’s light on an object.  Similarly, Baanto can tell the position of any object (for example a finger) by measuring the object’s shadow.  Baanto produces and measures the shadow via a simple frame (shown in picture below) that uses sensors at the top and LED lights around the edges. 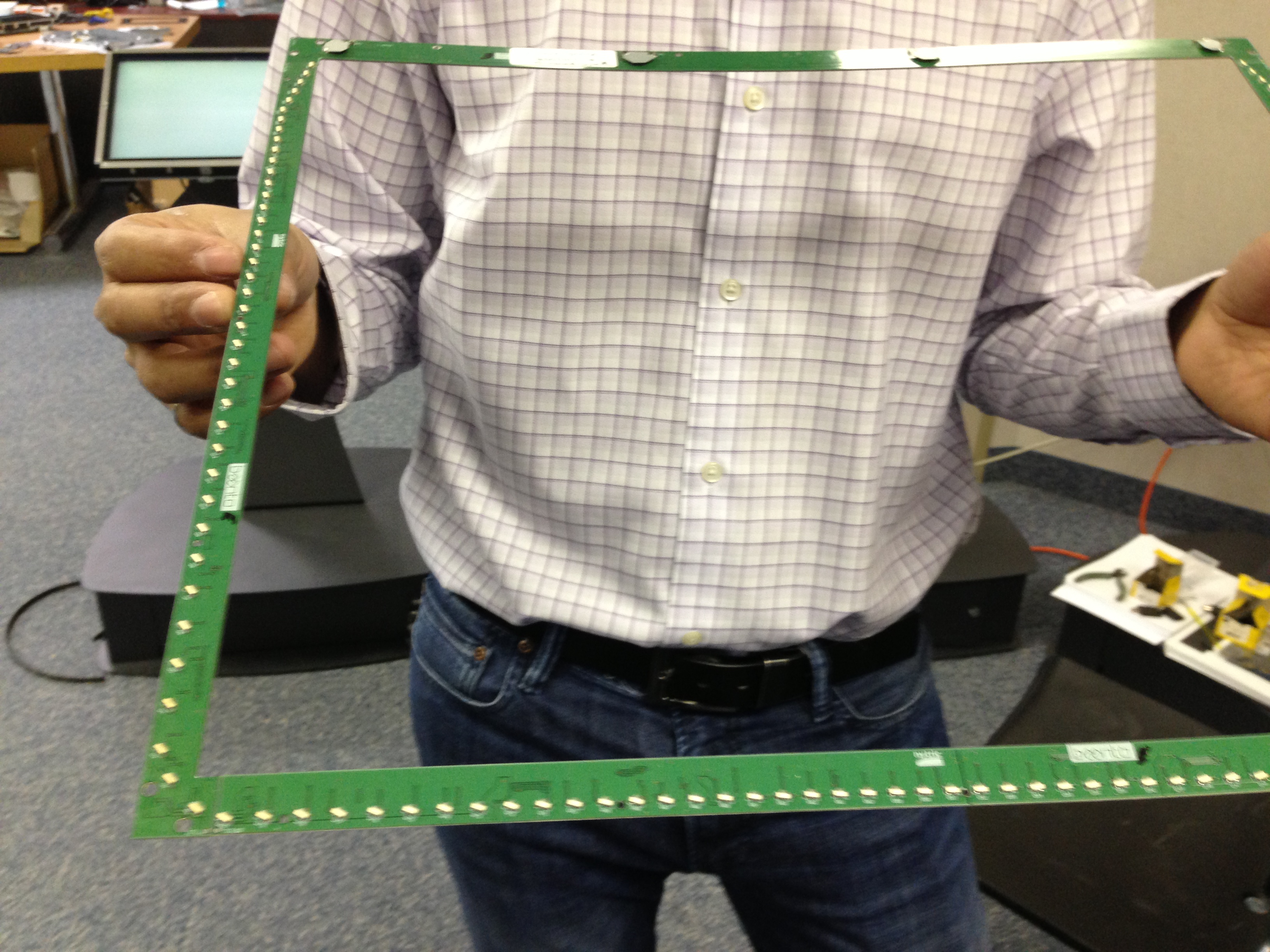 Now let’s consider our Design Thinking principles when assessing whether this technology is a true innovation.  Is Baanto Desirable, Feasible, and Viable?

Desirability:  Baanto is desirable for those that want very responsive touch technology (not just tied to a finger touch but any object’s touch like a paintbrush), on high resolution screens.  Baanto claims that it can sense objects 2 millimeters or greater in diameter.

Feasibility: Baanto claims technical feasibility because it’s simple to install and run.  Its algorithm to calculate the coordinates of a touch requires very little processing power (it happens in the frame itself), and interfaces to hosts via a single USB key.  We saw a 16 x 6 Christie Digital micro tile display wall at Baanto (it took up the whole room) and can confirm that there was indeed only one USB input and one power cord for the entire wall!

Viability:  Baanto is viable from a business perspective as it markets itself as a really simple technology powered by great math.  Baanto’s website boasts a price point of <$10 per sensor.

Thus according to Design Thinking, Baanto should be on the path for success.  Given Baanto just began to commercialize this year, and from talking with their CTO Avanindra Utukuri who is seeing customer demand from different sectors, I believe they may be on such a great path (as a side note:  simple technology doesn’t take simple time to create as Baanto spent over 4 years researching and developing this innovation with many patent filings).

So why would SAP be interested in this type of technology?  Forgive me dear readers for answering my question with a question, but sometimes this technique can be just as effective.  So I conclude my blog with the following question to ponder,

Where would SAP be in the future if we didn’t challenge ourselves to think beyond traditional modes of software application interaction?