FPM Forms are the new alternate User Interface (along with Adobe UI) provided by SAP in EHP6 for HCM Process and Forms.  A decent introduction about this new UI was already provided by Siddharth Rajora in this blog –

Like me, many of my friends must have already worked on “Adobe Interactive Forms” and on introduction of this new UI – FPM Forms (Web Dynpro ABAP based UI) the very first question that came to my mind was – “How does this handle the Scripting (i.e. How to dynamically make a UI field editable/visible)? Like Adobe Interactive Forms has Form Calc and Java scripts that takes care of this scripting, do we have anything special that does this scripting”. Well, I continued doing my research and found couple of ways to achieve this.

Scripting in EHP6 can be handled using the backend services. A new parameter is added to the Backend Service’s Interface (IF_HRASR00GEN_SERVICE) methods – INITIALIZE and DO_OPERATIONS in EHP6 –

This new field  UI_ATTRIBUTE can accommodate the following values – 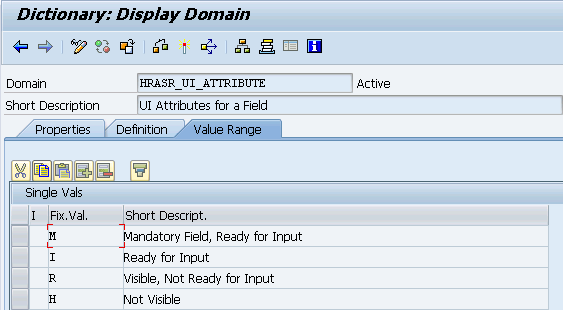 Went ahead implementing this concept using the below steps – 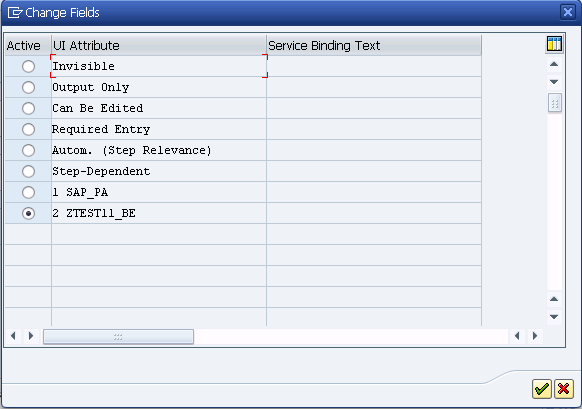 2. Controlled the UI Attribute in my custom backend service class’s method (INITIALIZE / DO_OPERATIONS), in my case I placed the below code in DO_OPERATIONS method –

3. Triggered the appropriate event to bring in the dynamic UI behavior – 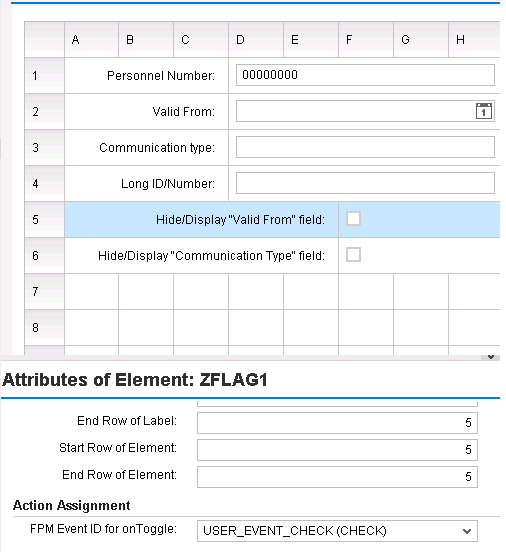 Like for this requirement, I want to hide the “Valid From” field when the check box is set. So in order to achieve this functionality, I went ahead attaching it to “Check” event. So when user toggles on this “Check box” control, the “USER_EVENT_CHECK” event gets triggered i.e. DO_OPERATIONS method gets called which takes care of my Dynamic UI behavior using Step-2 code.

On testing this configuration, the initial screen looks like –

On selecting the “Hide Display Valid From field” check box, I see the below screen –

Great going Kuncham 🙂 This is a far better alternative to user events in earlier P&F framework.

Thanks for this lovely tutorial.

As shown in your screenshots, "Valid from" field gets hidden and its place is taken by the next field in the config.

We were not able to achieve this even though the field gets hidden there is an empty space there which looks pretty ugly.

Could you please help as to what shall we do to achieve the shifting of the fields?

Thanks for the feedback Kunjal,

Well, I didn't do any magic in bringing the alignments together. The only thing I did was to have all these fields under the same group.

Try that approach and let me know if it works.

In your coding part, how you accessed directly the form field ZFLAG1 in your code.

Since in my case I have one custom infotype field as check box option and other fields which needs to be visible based on check box.

when I tried me-> (ctrl+spacebar) no form fields are displayed. it's shows interfaces only as shown below.

when I check in debug mode the import parameter SERVICE_DATASETS contains all fields and it's values. So, based on this I did coding and it's worked finally.

The checkbox to control the UI attributes of other fields is also part  of the same generic service.

So you need to do this,

1) Add a field ZFIELD in the generic service and then expose this field in the UI by FPM form configuration.

2) Get the value of ZFLAG1 from service_datasets inside the event attached to the checkbox.

3) Control the UI_ATTRIBUTES of other fields then based on the value got in step 2.

Is it possible to hide a List type form using UI attributes? I have a requirement to control the visibility of the Sections of the form based on the user action. I was able to successfully do it on FPM configurations of type "FORM". I am unable achieve this on the forms of type "LIST" eg: IT0014, IT0207. I am getting an empty table as shown below when I hide the Infotype IT0014 fields. I want to hide this table when I Hide the field attributes. Kindly help me how to achieve this.