One of the new feature of SAP TDMS 4.0 is data transfer through files.It is considered to be one of major enhancement in TDMS 4.0.

File transfer method is different from standard TDMS packages as it does not require the RFC destinations to all the involved system.

The export package requires Sender system,control system,Central system and a file system where data will be extracted.

The import package requires a dummy sender system, where SAP TDMS can create the cluster DMC_INDXCL and import files to the cluster.

The dummy sender system can be the receiver system, the control system, or a different system not used during export.

1.There is no direct connection between the sender system and the receiver system.

Both of these problems can be addressed via this new TDMS functionality.

3. Sender and receiver systems are in different data centers located in different geographical areas.In such cases, RFC based transfer takes lot to time due to slow network bandwidth between data center.One can overcome this limitation by running export package involving systems residing in same data center,move the data extract file to other data center and run import package there.

Things to do before using file-transfer method:

Specify the export and import directory for the data extract files by defining the logical path DMIS_DEX_ROOT in the SAP transaction-‘File’.

By default, the logical path DMIS_DEX_ROOT points to the transport directory DIR_TRANS that is defined in the system profile of the respective Data Transfer Control system

While choosing the export and import directory,keep in mind that it should have space available for data files which are going to be placed at that location.

Export or import path can be assigned using any one of the following methods:

-Change the definition of the logical path DMIS_DEX_ROOT in the control system by using transaction FILE.

-Create own logical path definitions and assign them as the new logical export or import path by using transaction CNV_MBT_DEXDEFAULTS in the control system.

One can change the maximum size for each data extract file by defining a corresponding maximum file size in bytes using transaction CNV_MBT_DEXDEFAULTS for the control system.Please don’t keep maximum size more than 500 MB as it can cause runtime errors(TSV_TNEW_PAGE_ALLOC_FAILED,SYSTEM_NO_ROLL) during data extraction phase. 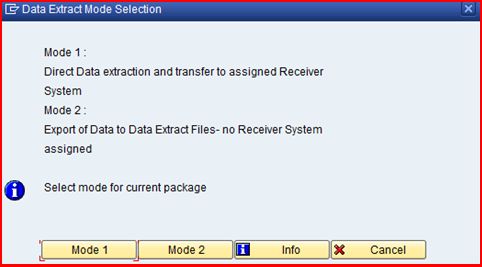 Other steps in process tree are quite similar to the RFC based transfer method.

Once export package is complete,transfer the files to receiver system

– Identification of Data for File Import :

Execute the Start Data Extract Import activity to import the data to the data cluster DMC_INDXCL in the defined sender system.

Other steps in process tree are quite similar to the RFC based transfer method.

This (file based transfer) is what I consider to be major enhanced feature of SAP TDMS 4.0. There are several other improvements which I have not included in this blog.

Thanks Kartik . The blog is indeed help ful especially considering the fact that the documentation from SAP on TDMS currently is not very illustrative.

Would look forward for more showing in more detail general problems during TDMS copies and how to tackle them.

Quite a helpful doc Kartik...Keep it up!

Thanks a lot for the help. you can reply to marimuthu@yahoo.com

Thanks Rishav. Will it compare between SAP system and Legacy payroll system?.

TDMs does not compare payroll results between SAP and Legacy system.

Do you have any documentation on how to define the virtual Sender system for Export? We are trying to configure tthe control system as the virtual sender.

Thanks Karthik for detailed explanation.

I have one basic doubt.

While doing export using File Based Transfer, can we select last 6 months or 1 year data like we do in TBR?

If not, what is the difference between regular DB export/import and File based Transfer?