Start-Ups On A Ship: Creativity The Silicon Valley Way 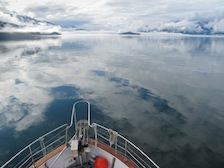 How do high performing companies produce extraordinary results? Google offers free time to experiment. Steve Jobs connected ideas across industries. Samsung connects brainy scientists. IDEO encourages wild ideas. So what if we brought all of those factors together in one start-up venture – on a ship?

In the spirit of IDEO, what could be more wild than that?

That’s Blueseed. We first heard about their venture last year. And there is more good news to report!

Entrepreneurs Dario Mutabdzija and Max Marty had teamed up to turn a ship into a start-up incubator — to house a thousand of the world’s most talented entrepreneurs. It will be stationed twelve nautical miles off San Francisco in international waters.

This “wild idea” is meant to help foreign entrepreneurs who cannot get a visa to come to Silicon Valley. Silicon Valley has a unique risk-oriented culture and network of seasoned entrepreneurs and venture capitalists to guide start-ups in turning a great idea into a scalable business. We all know the track record!

While visas are hard to obtain, debate continues on how to modify U.S. immigration law to attract and retain the world’s brightest technologists.

I recently caught up with Blueseed President Dario Mutabdzija for an update on how their venture is progressing.

Mutabdzija explained that not only does Blueseed offer access to Silicon Valley, but its diverse residents can cross-pollinate ideas for even more innovation.

In fact, Blueseed has been approached by anthropologists and sociologists who want to monitor interactions in the living space and the effect on learning, collaboration and competition.

Target date for the Blueseed launch is the second quarter of 2014. The team continues to raise capital, build logistics and infrastructure and waitlist a deluge of interested start-ups.

Singapore’s government and investors are looking at Blueseed to advance their own start-up initiatives. Singapore is one of several fast-growing economies in Southeast Asia. In fact, Thailand, Malaysia, Indonesia and Singapore are all expected to outpace the global growth estimate in 2013.

More than 300 start-ups have applied to be on the Blueseed ship so far. They range from social media to education, gaming, biotech, even real estate. Music, architecture, transportation and research start-ups are also on board. The sixty-four countries of origin range from Azerbaijan to Poland to Jordan to Sri Lanka.

Dario Mutabdzija believes that knowledge-sharing across this diverse group of people and places will inspire creativity in the way Steve Jobs did – by connecting ideas across industries.

But to his surprise, while entrepreneurs around the world are vying for a spot, a large percentage of applicants are from the United States. Why?

They too want to “live and work in an awesome startup- and technology-oriented space!”

The combination of energy, excitement and novelty can only lead to some extraordinary outcomes!

Mutabdzija said it will be tough to pare the final list to about two hundred early stage start-ups. He wants to ensure they bring together the right blend of technical, consumer, science and artistically oriented start-ups. Imagine what new ideas and business models could result from mixing music, oceanography, robotics and entertainment!

Blueseed’s ultimate goal is to “connect people, ideas and a human touch” with proximity to capital and expertise. Who knows what the final outcome will be. Welcome aboard!

Follow @JacquelnVanacek for how cloud can reinvent government and the economy.