The following Blog is about modifying an entity within an SAP Netweaver Gateway OData Service.

The classical way for updating data

Assuming we have a resource in the backend and we wish to modify it, we typically proceed as follows:

In this Blog, we use the SAP Netweaver Gateway Client (transaction /IWFND/GW_CLIENT) for sending HTTP requests.

One of the many advantages is the button “Use as Request”: it copies the response body to the request body pane.

We wonder why we have to send all that stuff if only one property is to be changed…?

The reason is the specification of the HTTP-Verb PUT:

The Gateway Service must replace all property values with those specified in the request body.

Missing properties must be set to their default values.

Missing dynamic properties must be removed or set to NULL.

Now, we’d like to introduce a new feature, which comes with SAP Netweaver Gateway 2.0 SP05:

The support for the PATCH operation.

The Gateway Service must replace exactly those property values that are specified in the request body.

Note: the HTTP verb PATCH is treated equivalently to MERGE

Now we repeat our example, this time using a PATCH instead of a PUT request.

Just to verify that with a PATCH operation also multiple properties can be modified, have a look at the following screenshot: 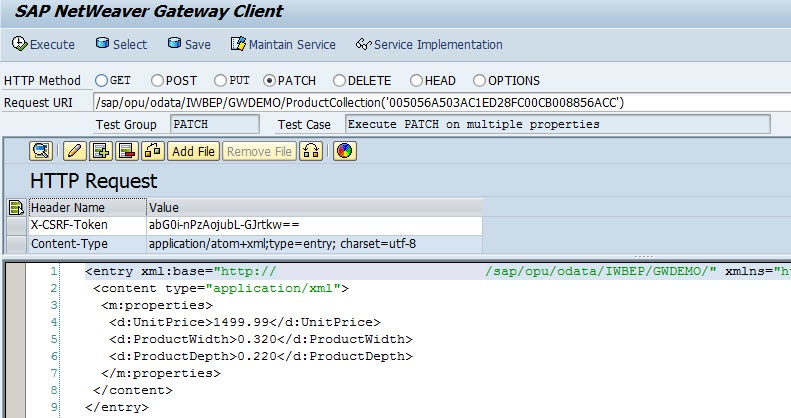 For those of you who are implementing Gateway Services in ABAP:

PATCH support is provided with method PATCH_ENTITY of the interface /IWBEP/IF_MGW_APPL_SRV_RUNTIME.

The Gateway Framework provides a basic default implementation of the PATCH_ENTITY method. Prerequisites however are implemented “read” and “update” methods.

The default implementation performs a read before update in order to fetch the complete entity.

The properties of this entity are merged with the property/properties provided within the PATCH request.

At the end, an update_entity is performed.

This default implementation has the side-effect that there’s some overhead, which results in some time loss.  However, these read-before-update calls are done inside the Backend-System (BEP), so no additional communication between Hub and Backend is done. The performance loss is so small that it can be ignored.

On the other hand, the service-creator has the opportunity to increase the performance by providing a custom implementation of this method.

The API Reference can be found in the SAP help:

The duration of a PUT versus a PATCH request can be analyzed and compared using the SAP Netweaver Tracing Tool, which can be started with transaction /IWFND/TRACES.

Find more information about the Trace Tool in the official SAP documentation:

On the Gateway-side, there’s some overhead of merging the patched properties with the unchanged properties of the entity, before an update is performed.

Thus, we don’t have to wonder that the overall performance of a PATCH is slightly worse than a PUT.

The advantage of the PATCH is the easy handling on the client-side and the thin load of HTTP communication.

The picture below shows a comparison between a PATCH (lines 1 to 12) and a PUT request.

We can as well see that– within the PATCH stack – the read and update calls are highlighted in dark blue, which means that they are performed on the Backend-side only. 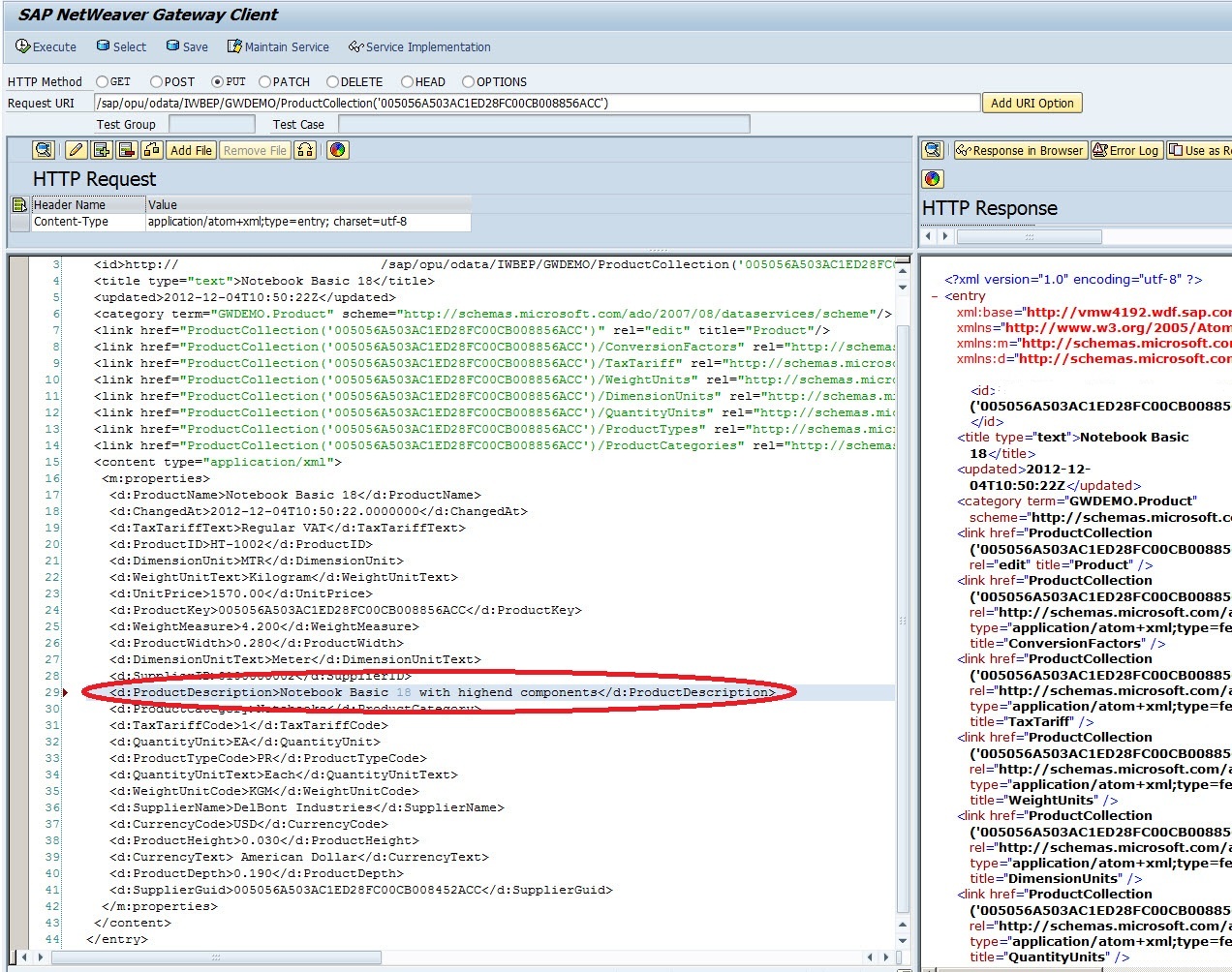 thank you for sharing! This will be very useful in scenarios where bandwidth and especially latency are a premium, like for mobile apps 🙂

I am getting this as response.. please help me on this..

XML passed in the body.

Sreehari, your xml is malformed.

Thanks a lot.. XML was malformed. now it is working perfectly.

Hi, as I can see from your xml, it seems that you've copied the response body of a QUERY.

The outer tags of your xml are <feed>

The error message says that the system expected an <entry> element.

As desribed above, we do a READ operation.

This is an HTTP GET request to a single <entry>

The entry element contains a tag <Id> and there you can see the URL for the READ operation:

You have to invoke this url and then use the response body as base for the request body of the PUT or PATCH operation.

Thanks a lot for the help. Now, i am able to UPDATE(Both PUT and PATCH), CREATE and READ . Is there any method available to update multiple records in batch ?

yes, the OData specification supports the batch processing via the $batch parameter.

You can find the official documentation here:

Or navigate to it as follows:

And there's a Blog in SCN as well:

Batch Request in Netweaver Gateway(Multiple Operations into a Single Request)

The URL is the service-base-URL with the suffix /$batch

Example for a request body:

Hi, where and how can I find my input property (ProductDexcription) in method /IWBEP/IF_MGW_APPL_SRV_RUNTIME~PATCH_ENTITY.

this can be achieved using the io_data_provider, e.g.:

The list of provided properties can be determined by:

I'd recommend that you take a look at the default implementation of /IWBEP/IF_MGW_APPL_SRV_RUNTIME~PATCH_ENTITY  in class /IWBEP/CL_MGW_ABS_DATA.

There are many times where the caller uses just PUT and inadvertently overwrites data. So it is always better that a PATCH is performed.

Do we have any example on Merge http method.