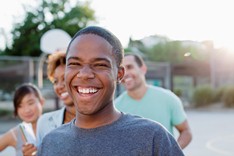 Robotics is one of the hottest trends in 2013. From its lowly beginnings in housework (think: Roomba), robotics are fast tracking up the ladder of importance in everyday lives. Self-driving cars, robotic surgery, and robotic exoskeletons for soldiers are indeed serious stuff. Even toymakers like Lego are moving from the ranks of hobbyists to make a huge difference in people’s lives. Case in point is the partnership between FIRST LEGO League (FLL), Trophy Computers & Robotics, and SAP in South Africa.

As founders of Trophy Computers & Robotics, Pieter and Zelda Pretorius introduced FLL in South Africa almost a decade ago. Headquartered in Vanderbijlpark, with clubs throughout Gauteng, South Africa, Trophy Robotics conducts clubs that give children hands-on experience in science and technology using Legos. Classes include basic programming and building skills. With sponsorship from SAP, Trophy Computer & Robotics trains coaches, mentors and students in 10 clubs from primary grade school through university level. Many participate in the FLL competition which grew to 120 teams in 2012.

“Our mission is to bring robotics to children who would otherwise never get an opportunity to work with these kinds of technologies. We want to give them an experience that will influence their career choices,” says Pretorius.

Students learn management and communication skills as they work on teams to design, build, program, and test a robot. It’s a unique combination of physics, mechanical, electrical, and structural engineering, along with math and computing. Many choose to participate in the FLL competition so they also learn how to present their designs to a panel of judges.

Bringing robotics technology to students in disadvantaged communities can have a profound impact at every grade level. Pretorius says training in robotics helps develop problem-solving skills as it fosters a student’s ability to design and build independently. All of this boosts self-confidence as students gain critical thinking and creative skills. Pretorius explains that “because technological problems have no one right answer, learners can explore an endless number of possible solutions.”

While he acknowledges results are difficult to quantify, Pretorius says that Trophy Robotics does keep track of club members of the years. Parent feedback indicates that students have benefitted greatly from the clubs, improving math grades and overall concentration. This is especially so with children in primary school, and those with learning disabilities. Some have become engineers, forensic scientists, auditors, and IT specialists.

“I would love to see FLL in all schools in South Africa, and I think that SAP has done tremendous work towards this vision I have,” says Pretorius. “SAP is a fantastic role model for all businesses in South Africa, and their involvement has made a huge difference in many young lives already.”