As I work for SAP, I know very well how the world perceives this leader in ERP space. You are probably thinking this when SAP comes to mind: And the word “startups” bring the other kind of image to our head: 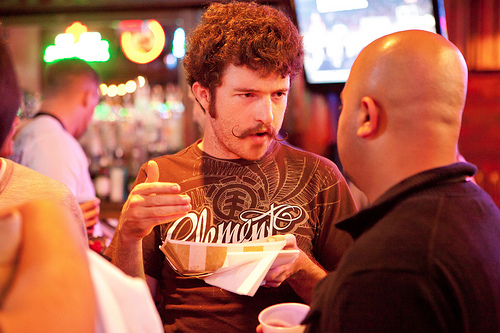 (Hint: killer mustache. The picture was found on Flickr.)

Therefore, yes, it takes a bit of imagination to connect the two, but in fact, SAP is now a startup incubator and accelerator. It’s nothing new, either: more than 150 startups have joined the program, and the first 20 graduated. The Startup Forum held on January 24, 2013in Palo Alto wasn’t the first one; the first was held on March 7, 2012.

Four “graduates” from the Startup Focus program, including Liquid Analytics, Feedzai, FanAppz and Next Principles, shared their journey and success stories.

Why Do Startups Participate

The official statements from the startups that have been through the program sound similar: they want to take advantage of SAP’s cutting edge real-time database technology, along with the intensive and hands-on technical training and guidance from SAP. This could also be a major take off point, since startups gain access to the existing massive SAP customer base.

Adopting SAP HANA  and devoting resources to building application means development cost. A lot of it. However, if selected by SAP to participate in the program, these startups receives free HANA license  and can tap into the $155 million venture fund started by SAP. Startups are often times cash-strapped so this move makes perfect sense.

SAP has acquired a series companies in the past few years, including Ariba, BusinessObjects, SuccessFactors, Sybase, and Syclo . If the right fit comes along, SAP is always looking to invest.

Startups also have the choice to become SAP Partners, like Taulia and Zettaset, and enjoy the support and promotion from SAP.

What Does SAP Want

Kaustav Mitra, Head of the Startup Focus Program, jokingly mentioned that idea of Startup Program came from a question: why was no one at SAP invited to the parties like the ones we saw on TV, especially in Bravo’s “Silicon Valley”?

The truth is, SAP is getting serious about building a platform and ecosystem, betting it all on HANA. As Vishal mentioned on last Thursday during his speech, SAP wants to work with the startups to figure out the right revenue-sharing model so all can thrive from the opportunities. For this kind of initiative, SAP wants to work with companies and developers experienced in building applications for enterprises. VCs’ investment trend also moves towards to more and more enterprise or B2B startups. Most startups that came to Palo Alto on January 24 to present their solutions and pitches fall in this category.

SAP also sees this as an opportunity for innovation. In this case, besides the enterprise startups, SAP needs to also work with the “edgy and cool” startups, and they don’t come from traditional means that SAP may be familiar and comfortable with.

I personally would love to see SAP working more with startups such as Crowdmob. It is new, young, and not just another dashboard product.

Some Things Maybe We Can Consider

SAP may be able to learn a few things from other companies that excel in building developer relations and platforms, such as Twilio, Mashery, Google, to really have a successful play in the developer/startup community. I have not seen SAP’s direct competitors done so, but I suggest we look into (regularly) sponsoring Meetup groups, hackathons or even hosting hackathons on campus. The idea is to be where developers and startups are, instead of expecting solely on having them come to us.

We are a giant – but we need to start thinking like a startup in order to achieve the traction and awareness among developer community.

It is always a challenge to jump into a new venture, especially when this new venture comes from a very different culture and mindset. I believe SAP is on the right track by kicking off the Startup Focus Program, and there are a lot of exciting work to be done.

What are your thoughts on SAP’s effort on building the HANA platform?

It's not just SAP marketing venting off some new buzzwords, but nicely written with a personal take on the topic.

That's the kind of blog post I'd love to see so much more often around here in SCN.

One thing though I have to disagree upon with you.

I agree with you that SAP is a giant and being such a huge company we suffer from overwhelming hierarchy and management structures.

Some things can take forever to get them done in such a company and SAP is no exception to this rule.

And sure enough, most startup companies are way more flexible - if not at this stage of their development as a company, when else should they, right?

But does this mean SAP needs to actually adopt the habits of smaller companies?

I'm not too sure about this.

We should make sure that we support our ecosystem as good as possible, but still we keep being a large company,

After all, SAP had been a startup once itself. And with the growth decisions were made to change the inner structure of the company, up to the state we have today.

So, again I'm not too sure about this, but could it be that this is just inevitable for growing companies to happen?

Maybe running such a huge organization itself is wrong (thinking along the lines of REWORK)?

Maybe there is another alternative, in which SAP can find a new role and continue to be the trusted business partner for it's customer and partners.

Thanks very much for your comment and insight. I need to do a better job explaining, but my point was  that in order to win the hearts of startups (they are in a way our customers), we need to put ourselves in their shoes.

I agree for SAP as a company to change gears into operating in SMB mode will probably not work, but we as employees may be able to operate ourselves in startup mode - which simply means being lean and mean (borrowing ideas from Reid Hoffman's "The Start-up of You".)

Stay warm in Vienna. It's such a beautiful city!

Great job with this blog as really enjoyed how you showed awareness as to how SAP is perceived and than followed that up with what they were doing that people may not be aware off to change that plus the pictures were great.

I think blogs by SAP employees that seem to scream from the rooftops how great SAP is (sometimes for products that arent even released yet) struggle to get the message across as reader tune out. I would love to see your model more broadly adopted internally especially as it relates to how SAP is perceived in the market and pain-points for customers and what SAP is doing with their initiatives to address.

Thank you very much Jarret. I did try to remain neutral and take the outside-in view as well. Also, this is the beauty of SCN - anyone can share their opinions and points of view.