Is Atari’s Bankruptcy a Symbol of the Shifting Business Software Space?

As the creator of iconic games like Asteroids, Centipede and Pong it saddens me to see video game trailblazer Atari file for Chapter 11 bankruptcy. The company is responsible for elevating video games to a serious recreational activity and booming, global business. And did you know late Apple co-founder Steve Jobs got his start with Atari? Despite this, the brand will probably not fetch top dollars, according to a recent New York Post article.

“The brand and a handful of intellectual properties are all they have left,” said Michael Pachter of Wedbush Secutiries in the New York Post article. “Yes, somebody will pay for those, and no, they won’t pay much.”

Thankfully, Atari isn’t disappearing as the company intends to re-launch as a mobile games maker.

Putting management and monetary issues aside, Atari’s situation is not only indicative of the changing video game landscape (more mobile, less console) but signifies what is currently transpiring in the business software space.

SAP is continuously put to the test when disruptive technology like mobile computing infiltrates its core “on-premise” business. As we’ve come to learn, great leadership, a bold vision and an “intellectual renewal” of SAP’s core suite of products will help the company manage disruption and become more responsive to customer needs. Easy “consumption” also matters at SAP and for good reason. I’ll refer to another bit of video game news to underscore the importance of consumption. 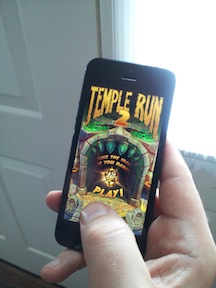 From a recent GameSpot article:

The recently released iOS title Temple Run 2 was downloaded more than 20 million times within four days since its release on January 18. The free game was first place on the top 25 free apps list on Apple’s App Store. The title garnered 6 million downloads on its first day of release. The previous game, Temple Run, was downloaded over 170 million times on Apple’s App Store, Google Play, and the Amazon Marketplace. Players can check the game out on the iTunes App Store page.

With built-in demand, improved graphics and gameplay and making it free on a variety of platforms, it’s not hard to see why the Temple Run franchise is, ahem, a runaway success. Atari will no doubt take a page from the Temple Run playbook as they concentrate on mobile games. SAP is also paying close attention to how this type of software is consumed and is already incorporating these attributes in the following ways:

As Isaac Asimov famously noted, “change is the only constant.” By keeping a finger on the pulse of shifting consumer trends, SAP is betting change will be much easier to manage for its customers – and perhaps more importantly – its customer’s customers.

Can the Wii U Save Humanity? A Skeptical Parent Weighs In