Eric Schemer, SAP Product Owner for Design Studio and the Analysis clients, kicked off this webcast. Please note that the usual disclaimer applies that statements made here are subject to change and anything planned is subject to change.

In a surprise for attendees, SAP also provided a sneak peek of the functionality for the next version of Design Studio 1.1 (more on that later).

Products are clustered in 3 areas:

1) Discovery & Analysis – developing there and shipping to market

It is targeted to key user, technical, not just IT but also a more technical savvy users to build professional applications. It is used both for standard desktop & mobile world, providing sophisticated apps & dashboards 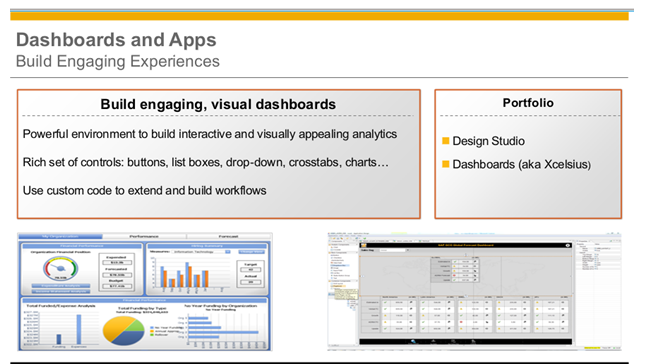 Today there are three products in the Dashboards and Apps category.  Design Studio is the forward moving product for application design.

Dashboards is from BusinessObjects perspective and is more related to bringing in arbitrary data sources and building dashboards on any type of data. 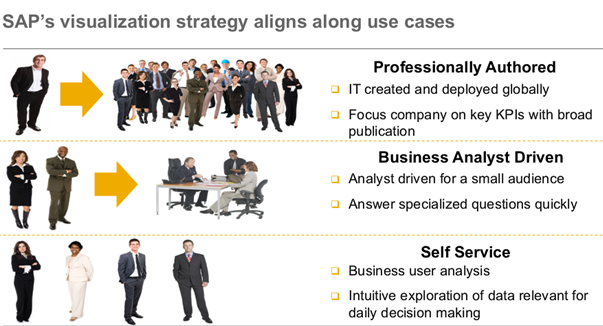 Three major scenarios of visualization strategy are shown in Figure 3.  One is professionally authored – classic BI tools – key users build apps and deploy apps to a broader audience.  This is where Dashboards & WAD come from.

Business Analyst driven world which is more ad-hoc, simple; they are not full-fledged sophisticated design, lightweight intuitive – catering for business user and day to day user 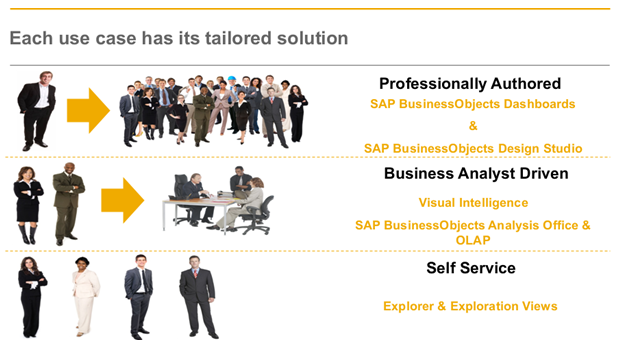 Figure 4 shows the map to tools.  For professional authored dashboards Design Studio is the key product with Dashboards merging into Design Studio. 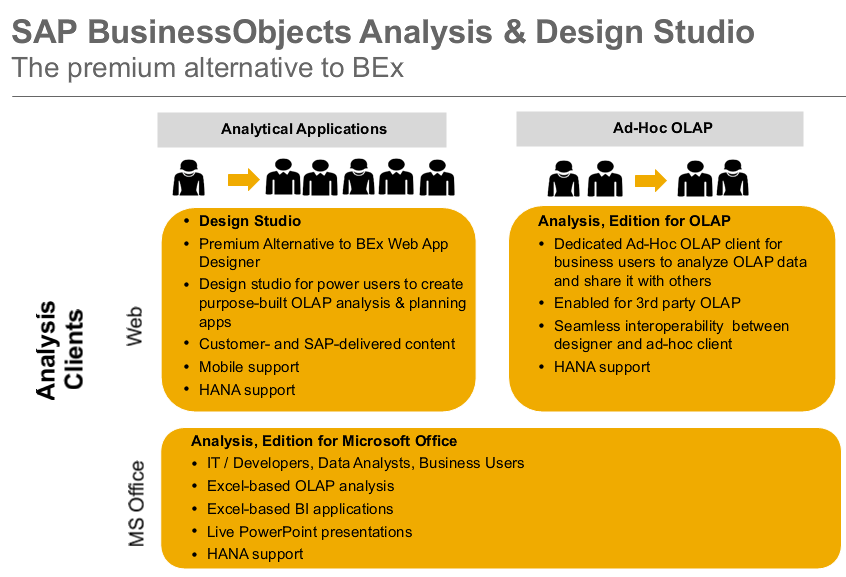 Three products in Analysis client family; taking over the scenarios you used to build with the BEx offering

BEx Web has Analysis for OLAP

Analysis Office also has an integrated developer & app building approach – you can use Analysis Office to build Excel based application and dashboards.  It also caters for business analyst as it has crosstab and exploration capabilities

Analysis OLAP and Design Studio will come together over time.

Analysis OLAP will be based on Design Studio functions. 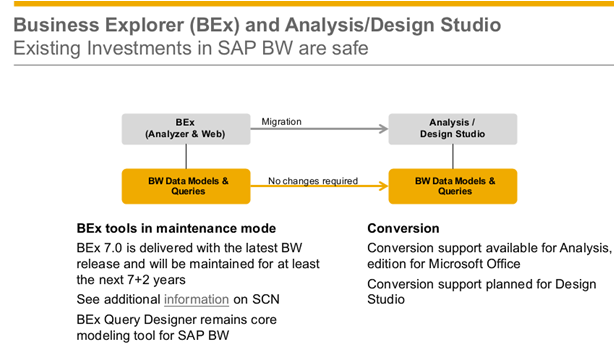 Figure 6 is to provide clarity to BEx.  There are still a lot of questions and misconceptions around BEx.

The BEx maintenance release corresponds to BW release (e.g. 730) comes with a new install of BEx 7

For example, if SAP ships BW 740 will include a new instance of BEx and maintenance would correspond to BW 740 release.

No end of life planned for any of the BEx tools.  BEx investment is safe.

BEx Query Designer will stay as key semantic model for BW and this will not change.

Down the road, SAP plans to offer migration/conversion for WAD to Design Studio (planned) 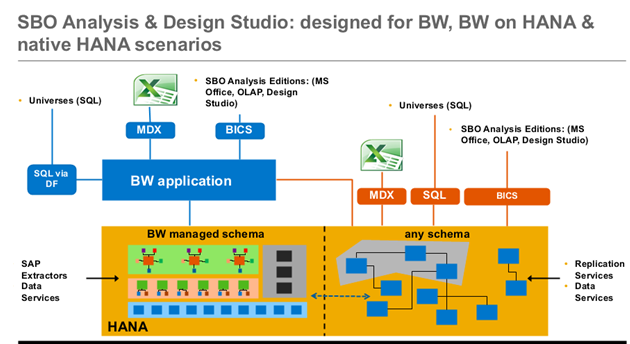 Figure 7 shows current architecture.  Analysis & Design Studio sit on the same access layer.  BI Consumer Services (BICS) was built for BEx and it is being leveraged by Analysis against BW and instance on HANA native.

You can use Analysis & Design Studio to connect to HANA

You can use it to connect to BW ABAP layer

BW on HANA as shown on the left side of Figure 7. 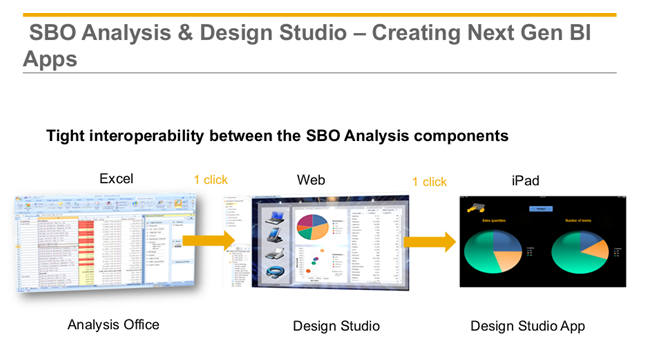 Leveraging tight integration technology, you can use Analysis 1.3 you can copy and paste sheets into Design Studio, apply an iPad template. See http://scn.sap.com/docs/DOC-34488 for more information on this. 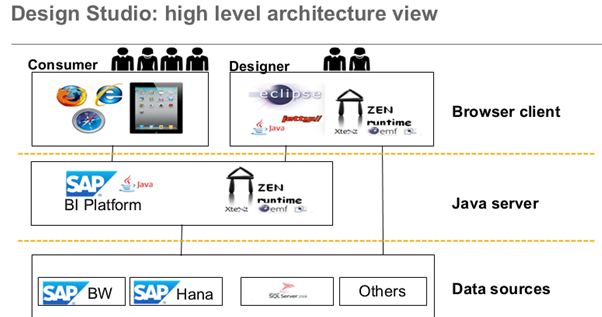 Two installers come with product (for installation instructions please see this video by the CSA team.)

The Designer is installed on the desktop 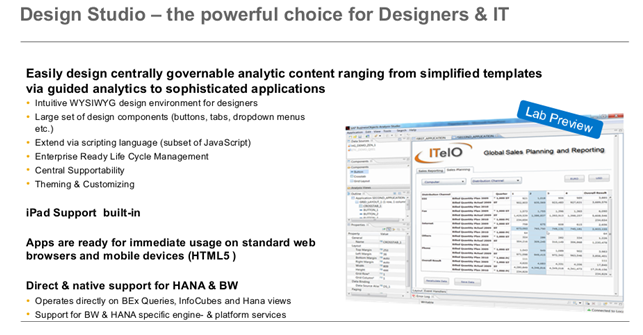 What you see is what you get as you see in Figure 10.  You always build and design with live data, always see the same layout. 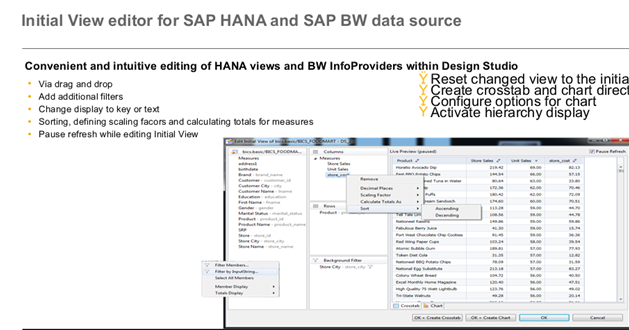 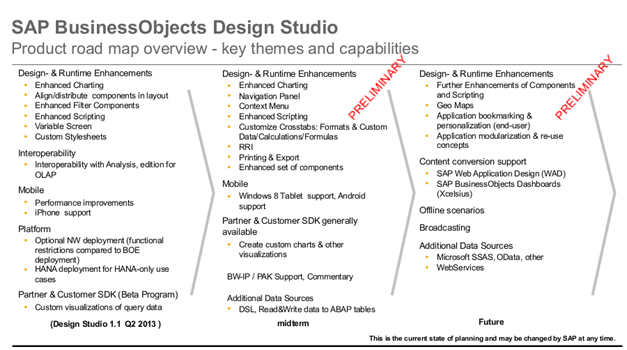 It will have interoperability with Analysis OLAP

SAP is working on the first SDK for custom visualization and is offering a beta program for customers and partners in Q2.

SDK will go in GA in mid-term

The plan is to offer universes as an additional data source later this year.

We saw a great demo of Design Studio 1.1 and if time allows will post more on that later.

Q:  I am not seeing any mention of SAP Visual Composer. Can Eric talk about where it fits?

A:  Visual Composer is no longer in development; since acquisition of BusinessObjects investment phased out – no new features added to VC

Q:  So position of Analysis as an ‘application’ from Design Studio sounds exactly like Bex Web and WAD

Q: Analysis, Edition for OLAP and Designer studio are mutually exclusive from a use case perspective? i.e. Analysis edition for OLAP can be used for AD-Hoc and for professionally authored ones, Design studio is the option?

A:  Yes, but we want to base them on the same technology, that would potentially mean that you could even change behaviour and features of A OLAP with the Design Studio

Q: A default WAD template can be used for a BEx Web Query, can a Design Studio “template” serve the same purpose?

A:  Will provide this template functionalities in the next releases.

Q:  Are there any enhancements for BEx after 7.3 or will it just be maintained?

A:  It’s in maintenance, meaning support for new browsers or new BW backend platfrom are built in but no new “real” features

Q: Are BEX Web Apps continued to be supported as well.

A:  Yes, Bex WAD is continuing to be supported

A:  Design Studio is using the CVOM charting like other BusinessObjects product is doing.

Q: Design Studio appears to be limited to IE 9.0 .  Is that the plan going forward or will it be available for IE 8 as well?

A:  The runtime of Design Studio can also on IE8 with some minor limitations due to HTML 5 technology. On Design time you need to have IE9.

Q: any plan in future for design studio for android user as now ipad only ?

Q: Is there a requirement for ie version for zen/designer – what about other browsers?

A:  ZEN Design time needs IE9. On runtime the browser IE, SAFARI, Firefox is released. you can check that again in PAM on SAP service Market place.

Q:  What is driving ie9 need? We have seen ie9 as very problematic itself.

A:  Yes, Design Studio 1.0 is also released for Chrome browser

Q: Is the designer installable on Citrix client rather than on user’s pc?

A:  Citrix is possible.  a couple of customers already installed ZEN in Citrix enviroment

Q: Is it possible to install the designer with IE 8 only?

A:  Today no that is not possible with the designer – you need IE9

Q: Can you install designer on Chrome, or Firefox, if you don’t have IE 9?

Q: I think Eric said earlier that eventually Xcelsius and Design Studio were merging.  Is there plans for a conversion wizard from Xcelsius to Design Studio?

A:  Conversion support is planned for the future releases. But it maybe not in a WIZARD mode

Q: Can i hide components at design time so i have one front of me where i want to work on .. ” Design Time”

A:  this is coming

Q: I see SSAS again as a potential data source. Will it only support SQL Server 2008 and later or is it back reaching to SQL Server 2005?

A:  direct SSAS access is not enabled yet, it would likely be only with 2008

Q: Can dashboard developed with Design Studio be deployed to Android devices?

A:  It’s HTML5 so theoretically yes, but we have not fully tested and hence not officially support that yet

Q: How will design studio write to ABAP tables in the future?

Q: In addition to Bader’s question, I think SAP needs to publish a list of features and controls from an Xcelsius dashboard that cannot be converted over. This helps us in planning tremendously.

A:  yes, as we move ahead we will see more of these type of recommendations

A:  planned mid term is Q4 this year

Q:  How does Design Studio competes against Xcelsius?

A:  they merge, today DS is for BW/HANA, XCE is more for other data sources

Q:  is any flex in design studio as  dashboard is having flex 4(maybe)

A:  absolutely not. flex is a no go

Q: INteroperability – Can we jump from Design Studio to WebI or Analysis? Can the results of a WebI report be consumed by Design Studio?

Q: Dashboard has a limitation on how much data we can keep in it without impact on performance. Is there any limitation with Deisgn Studio on number of rows?

Q: which BOE version (BO 4.0 SP4 or higher?) required to publish these applications

Q: Sorry I was late, Design Studio is the replacement of webirichclient?

A:  no, it has nothing to do with WebI, it’s about XCE & BEX WAD merging

Q:  Please define midterm and Future, with regard to the roadmap slide.

Q: which release will support all data sources?

Q: as right now there is no app for design studio but if i have the url of the design studio dashboard  can i see my report in android web application ??

A:  as it is HTML5 yes, but it’s not officially supported and tested yet…

If you are not an ASUG Member and are interested in a trial membership please e-mail trailmembership@asug.com for more information.

Thank you to Eric Schemer and Jie Deng for supporting ASUG with this webcast.

A must read blog for anyone interested in Design Studio and dashboarding 🙂 Thanks to Tammy and the ASUG BI team for channeling so much good information to the community - product updates, features, roadmaps, demo and detailed Q&A - plus the summary blog!

Bhanu - thank you for your kind words and thank you for supporting ASUG.  I forgot to mention the great work/support of ASUG volunteer Joyce Butler who moderates the most webcasts for ASUG 🙂

After reading your each blog, especially Question & Answer Section, there is hardly anything to ask, until something new comes up. Always Packaged perfectly 🙂

Is there a possibility to review the webcast. I´m very interested to see the demo of DesignStudio 1.1.

Thank you for your interest.

The webcast was open to ASUG Members only and it is not possible to share the webcast.

If time allows I will try to write about the features we saw.

This would be great. Thank you very much in advance.

Seems to be DS will be not bad product in next year ?

RRI and so on.

But hope it will be more stable and bugless, not as others BO brothers.

I want to know that SAP BO Design studio is going to replace SAP BO Xcelsius (Dashboard) in future.

Please see the statement of dashboarding direction at http://scn.sap.com/community/bi-dashboards/blog/2012/04/17/the-future-of-dashboards--strategy-and-direction

If you have more questions please post them in the discussion forum.