Recently I was asked as a reply to one of my previous blog posts, wether it is possible to wire multiple UI building blocks to one target. The target could be a transaction component in order to save all of these models when the users presses the “Save” button in the UI.

The exact question was:

“If we have a GAF with several steps and at the last step we want to save all the GUIBB’s. Some GUIBB’s have there own model.We have created a WD component with interface IF_FPM_TRANSACTION. We want to transfer all the GUIBB models to the transaction component.Wiring would be nice, but we have more sources to the transaction component. That is the reason why I would like to have more sources to a target. What would you do? We can always use a factory singleton, but if we do that then the wiring would not be needed anymore.”

To answer the question, having a FPM transaction component as a target for multiple UIBBs is not possible. But there is a workaround, which could help solving this issue.

The fairytale of Hänsel and Gretel

The basic question is, how heterogeneous feeder models can be connected to a single UIBB feeder model which eventually performs a Save-operation on all the received feeder models.

This is where a commonly known fairytale comes into the scene.

Everyone who knows the fairytale already has the answer: Both are held captive by a witch. But what does that have to do with our FPM application?

Technically spoken, we need to transfer both feeder models to a composite feeder model. This is, where the composite pattern is used.

Both feeder models need to implement the same interface ZIF_FPM_SAVEABLE_FEEDER_MODEL which forces its implementers to implement a SAVE( )-Method.

This means, the witch model may include other feeder models and subjects them to a common treatment, which is, in this very example, the Save-operation. 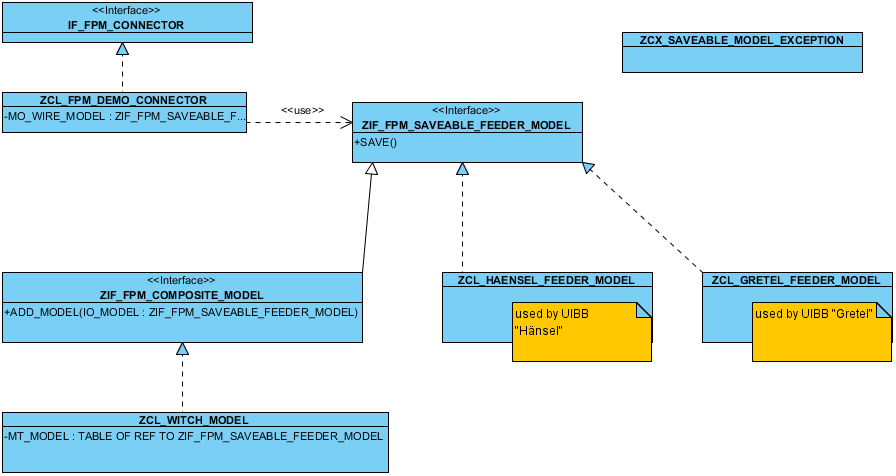 The wiring behaviour of the UIBBs now needs to work like this:

2. If no input was provided, or the input had the wrong data type, a new composite model of type ZIF_FPM_COMPOSITE_MODEL is created by the UIBB

3. A new outport of the UIBB is created which outputs a composite model of type ZIF_FPM_COMPOSITE_MODEL

4. The UIBB’s feeder model is added to the output using the ADD_MODEL-Method of the composite model

This approach allows you to wire multiple UIBBs, who have a completely different feeder model, together. The output of every feeder model will be an instance of type ZIF_FPM_COMPOSITE_MODEL. Now we’ve got several wiring possibilities to wire the UIBBs and the FPM transaction component together.

Option 1 – The FPM transaction component pushes ZIF_FPM_COMPOSITE_MODEL to the feeders

Both feeders receive the witch, which is an instance of type ZIF_FPM_COMPOSITE_MODEL. Every UIBB adds its own model by calling the ADD_MODEL method. In the end, the witch holds captive all the feeder models.

If feeder models need to be transferred using wires, a common interface and the use of the composite pattern may be an option, if the implementations of the feeder models differ. This is often the case, if the UIBBs in the application were initially build up for another use case, but now need to be combined for a new application.

However, the interface which needs to be implemented yby the feeder models depends on the type of common treatment you want to apply to the feeder models. So there is still the effort of applying the above shown changes to existing feeders.