New Yorkers speak many different languages. But a particular dialect of English has long been essential for drivers. If you do not know this dialect, you will suffer financial penalties. I am referring to NYC parking regulation signs. Even long-term city dwellers/drivers are often seen staring up at the signs, re-reading them, translating them and double checking before they walk away from their parked cars. 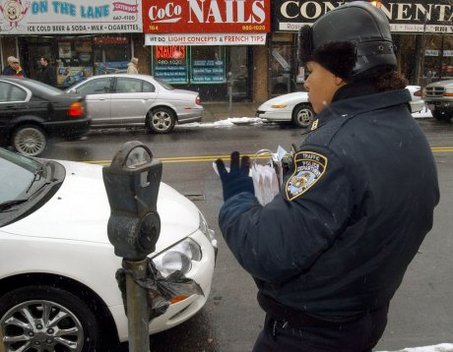 This week, The NYC Department of Transportation unveiled a new design for parking regulation signs in Midtown Manhattan. Designed by Michael Bierut and Pentagram, they are intended to make things easier for NYC drivers.

I love Michael Beirut’s description of the previous signs:

“Design conventions for the parking signs were basically almost 19th century in their character,” Mr. Bierut said. “It’s like if you were doing a playbill for vaudeville performances at some music hall in 1895. You’d have everything in capital letters. You’d decide what was important, make that the biggest. A little less important, something smaller. A little less important, something smaller. And you’d center everything. If something was really long, it would be in a squashed, condensed typeface. If something didn’t have that many letters, you’d make it in a wide typeface. It was as undesigned as possible.”

The new signs are a vast improvement in readability. By reducing their height from 60 inches to 48 inches, they reduce visual clutter on the streets. Gone is the need to mention paying at the Muni-meters since they have become ubiquitous. The color coding for commercial vs. non-commercial parking has been retained. It’s odd that borders are required by a federal regulation, as if the rectangular shape of the sign is itself a border. Now the actual parking limit time is large and easy to read in the upper left corner. In a nod to the twitter generation, the verbiage on the signs has been reduced from 250 to about 140 characters, further decreasing clutter while retaining all necessary information. All the type is now flush left instead of centered. One consistent font, reflective of the font used in signs along the Interstate system, is used throughout with fewer variations in size. Lastly, the signs have more white space, further easing readability. 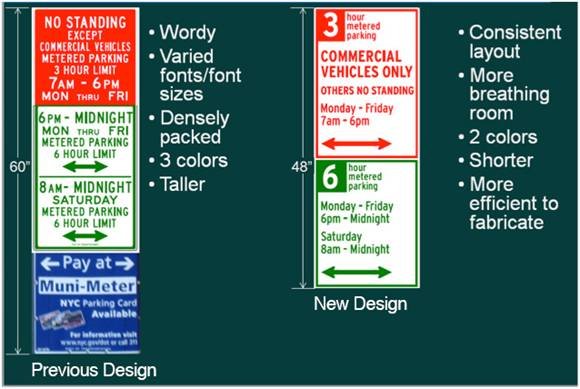 Drivers will benefit from the easier to read and understand signs, and they will be less likely to presume that the signs are intentionally vague so the city can increase parking fine revenue. So, it is a public relations win for the NYC Department of Transportation, too.

It’s no secret that good information design can reduce clutter and makes our lives easier, but it is always a mystery why changes like this can take so long. And while this is a huge leap forward for NYC drivers, perhaps the project was too modest in scope. I would be curious to see the design solutions that were rejected by the Department of Transportation as too radical; I don’t doubt that Pentagram had visions of some more transformative designs than what was settled on. I also don’t doubt that working with a government agency presents manifold complications and limitations. We have a very good solution in terms of relatively narrow parameters; keep the shape, edit the wording, nothing too different, just clean it up. But was this a missed opportunity? Are there graphic solutions that could make these signs even clearer? Are there clock-like diagrams that might graphically indicate spans of time during which parking or not parking could be represented visually? Could it be done with some sort of a timeline? Red and green colors tend to be read as stop and go in a traffic context, why do they mean commercial and non-commercial here?

I don’t want to detract from the huge accomplishment by Pentagram here; I’m sure I’m just asking some of the same questions they did when they developed a brief and began their creative exploration.

The new design of parking signs is much better - less cluttered, organized, but I still don't know what to do between midnight Friday and 8:00am Saturday. Guess that is when they make the money.

There are no restrictions during the hours not mentioned.

Better late than never.... thanks to Keith Elliott for bringing this fabulous series to my attention.  Would love for this to get more visability!

We are planning a Design Thinking topic and community hopefully your content will grace its pages.