1 7 2,013
Hi,
As you all probably know, SAP AG officially released latest version of SAP PI 7.31, which provides new enhanced functionality compared to the previous release SAP PI 7.30, and of course, new product within latest release called SAP NW Process Orchestration, representing a combination of 3 products PI, BPM and BRM.
In this blog I would like to give a short insight into new and enhanced functionality of the new version, I’m not going to cover this topic into much detail because there are lots of articles written on this topic, instead I will reference then accordingly.
My aim is to advice how and when customers could gain competitive advantage from the new option provided by SAP PI 7.30 and SAP PI 7.3 EHP 1, to install Java stack only, widely known as AEX (Advanced adapter engine extended).
If we look at first attempt to substitute Dual Stack with a Single Stack in release SAP PI 7.30, its hardly have been done due to big gaps in functionality from Java point of view, in the further release and SP’s SAP AG heavily invested and catched up the major functionality which reflects the following table: 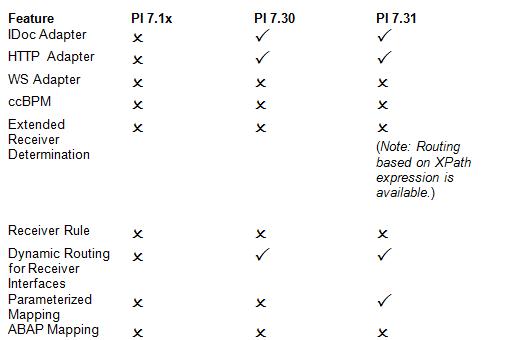 As we see SAP PI 7.31 AEX became most completed and mature product with fully fledged functionality and continue growing with next SP’s.
The full comparison features between all SAP PI releases is done perfectly by Alexander Bundschuh from SAP AG in the following blog.
http://www.sdn.sap.com/irj/scn/index?rid=/library/uuid/f0d70f21-e7f4-2f10-0380-e1f5ff496568
And of course, it’s extremely interesting to know about the pros and cons if the customer choose AEX installation option.
Benefits from SAP NetWeaver Process Integration 7.3 Single Stack installation –
Disadvantages from SAP NetWeaver Process Integration 7.3 Single Stack installation
Personally for me, based on the limitations above, the only major one is the absence of ccBPM and no migration instructions for scenarios from Dual stack to Single stack.
With the first release of java-only PI 7.30 AEX, there are still some restrictions on the configuration of integration scenarios; therefore, those types of scenarios cannot be migrated from the dual-stack.
With PI 7.31, some of those restrictions were further corrected, with functionalities in Java made compatible with those of the ABAP stack. But, still, there are scenarios with functionalities depending on the ABAP stack which cannot be migrated.
However, there are some attempts to guide customers with how-to instructions from William Li on this topic. http://scn.sap.com/thread/2115810

In addition, I want to notice that SAP plans to provide and invest into migration support from dual stack to single stack in future. (p.35)

In conclusion, wanna say that due to leaner hardware requirement and performance improvements, AEX became very attractive as an installation option.

In spite of, SAP AG heavily invested into Java platform, there are still certain limitations from customer point of view which must be taken into consideration before going for this option.

If it’s a new implementation and a customer absolutely sure that there will be no scenarios related to the limitations on Java stack (WS adapter, ccBPM, ABAP mapping)the best option is to embark on Single stack because its loose coupling, highly available, dynamic routing(content based) possible, message blacklisting,lower TCO, faster installation and restarting and of course better performance and throughput. Then definitely go for this option.

If you know that some system-centric or human-centric complex scenarios are required and ccBPM could help, you can still go for Java only stack composed of SAP NW Process Orchestration (PO).

SAP PO is a combination of a bundled product of PI, BPM and BRM. (more information on http://scn.sap.com/community/pi-and-soa-middleware )

Although, ccBPM and BPM are based on different notations, BPEL and BPMN respectively, you can use NetWeaver BPM for System-to-System Message Orchestration (http://scn.sap.com/docs/DOC-28803). this case, you not gonna sacrifice the functionality for the sake of performance.In

If you desperately need WS-RM adapter which is on ABAP stack or ABAP mapping or cross-component BPM, then the only option for you is classical Dual Stack installation. Do not believe the rumors that the dual-stack won’t be supported with the latest release. The good news is that SAP will continue to support the PI dual-stack with the upcoming releases. The PI dual-stack won’t go away on the short term; at least it will be supported until extended maintenance of the NetWeaver release 7.3 which is until 2020.

this is a very nice blog and couldn't have come at a better time.