Diary of an SAP Business One Implementation

I intend to write a series of Blogs following the path of an SAP Business One implementation at a 12 user Wholesale Distribution company in The UK. I have been taken on to manage the project from an internal process aspect and to manage the relationship between customer and integration partner.

The customer currently use a separate accounts package and different system for CRM. There are a number of Excel documents in use for various functions and we are looking to incorporate all processes and functions within SAP Business One Version 9.0 (Ramp Up) to unify business processes and increase business visibility with a focus on reporting and increasing sales activity.

The company have adopted Prince2 as a project management methodology and we are working to a tailored version for this project. This will be a step by step sequence showing what is done in each stage of the project and I hope it is a useful guide for anyone looking at an IT upgrade in the future themselves. By managing your own internal project team you will have control of how the system looks and functions, you will also keep a tight control on budget and timescales meaning there is more chance of an on time, on budget Go Live rather than letting your SAP partner have full control.

Back in October 2012 the company created a simple Project Mandate document stating why they needed to amalgamate all functions in to one system and stated they would be looking at 3 solutions over the coming months. The Mandate also stated the expected benefits and very basic costs of an IT upgrade. After the software demonstrations it was decided that SAP Business One would be the preferred choice as the business intended to grow and wanted a future proof system capable of growing with the business.

Once the decision was made, the company set up a Project Team to include Senior User, Senior Supplier, Executive and Project Manager. For the purposes of this project I am the Project Manager and also Senior Supplier as I’m best placed to manage the relationship with the integration partner. At this stage I took over running the project on behalf of the Project Board and a Project Brief was created. This detailed an outline business case, reasons for doing the project and a list of benefits to be achieved in a set timescale. We also nominated team leaders in sales, administration, finance and warehouse who will be involved in aspects of the project. A meeting was held with all members of the Project Board agreeing to commit to the project, budgets were assigned including a sum for contingency and we set a date with the SAP integration partner to run a kick off meeting.

From an internal aspect it is important to know and map what we do now so we began a series of white boarding sessions to map the As Is process flows. 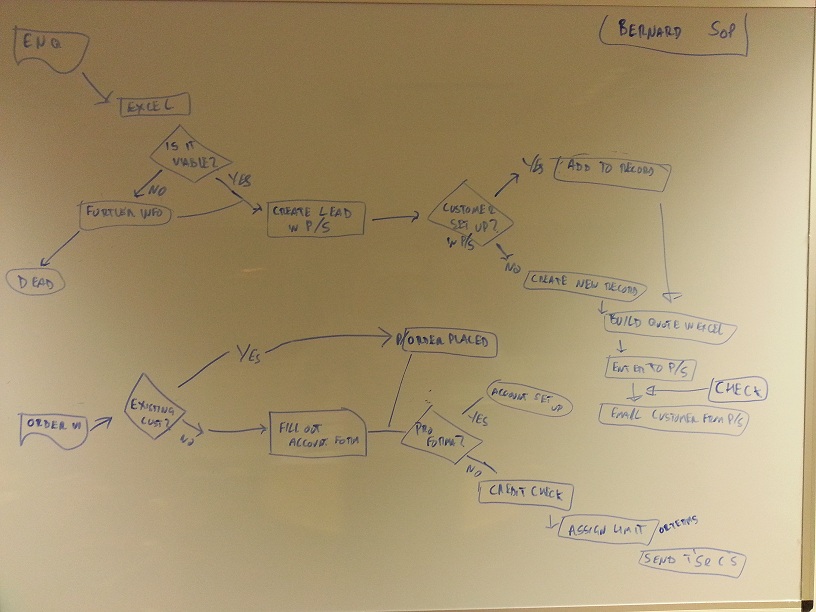 These process flows were agreed with the teams and mapped in to MS Visio: 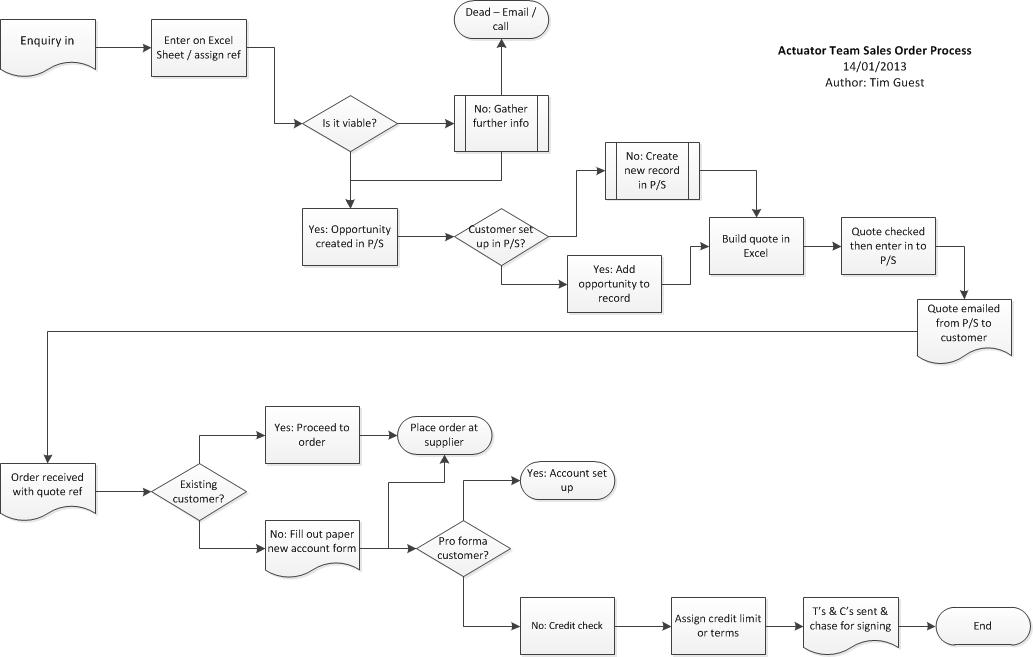 These process flows are all numbered and saved in the project folder for review and change as we design the To Be state further down the line.

During this process it is important to keep control of the Change Management aspect of the project, it is easy to forget that the users may not like change and the fear of unknown could harm the viability of the project. During this process mapping phase, it’s vital to reassure the users that change will be managed and controlled and that they will play a part in how the new processes work. It is also a good idea to ask the users how they feel they could work better, I found a number of people thought their process was long and included lots of duplication. Communication is very important throughout the project and I intend to update the users on a regular basis whilst also providing verbal / written highlight reports to the Board.

Once we move on to the next step of designing the system blueprint with new processes defined I will blog again.