The SAP Visual Intelligence Data Geek vote is under way, the following link will take you to the overall contest.

Vote for the Ultimate Data Geek!

I always intended to blog about my entry for the SAP Visi Data Geek Challenge on SDN  SCN but free time was always against me. The technical details of SAP Visi (at the time) required a 64 bit computer. I only had a 64bit computer at home, which meant my own time at weekends on a 4 year old iMac running virtualised Windows software (SAP Visi ran fine on a virtualboxed windows 7 install). So now I have your sympathy 😉 I am sure you will now vote for my entry at Vote for the Ultimate Data Geek! View the entries here:  http://scn.sap.com/docs/DOC-33391

The contest was a great way to get involved and use SAP software. Although the amount of free trials SAP offer nowadays it is difficult to know where to start. Although the T-shirt on offer for the contest, (both front and back of the T-shirt) made it a no-contest that I would try SAP Visual Intelligence.

To introduce my entry I created an iPad iMovie trailer. It’s just over 1 minute & needs sound for full effect but there is no voice over.

The full 9 minute video that is part of the vote is below. This time with my voice over. Recording the video made me realise how difficult it is to try and make a point in a short time frame to keep the viewers attention in a video. I recorded as I analysed the data in real time and it was only during playback I fully realised the time taken. So some sections were dropped from the final cut although maybe one day I will produce a directors cut or a DVD of outtakes 🙂 .

The video covers the way I used SAP Visi to analyse the data set, I will highlight some of the areas below.

My entry focused on a SDN points (pre-jive) and the data I had already collected via the SDN RSS feeds. This time around with SAP Visi I thought I would look across the entire data range from years 2004-10. Something I had not done before as I had focused on individual years. The main features of SAP visi that I used where the bubble charts, tag clouds and choropleth maps. The geographic and date hierarchies were used as well to generate the visualisations.

My SDN Points data set was created using ABAP reports and the SDN RSS feeds that were categorized by  ISO 2 digit codes. Using the public domain data set from http://www.naturalearthdata.com/downloads/ which contains 2 digit & 3 digit ISO CODES I was able to map this data using software

SAP Visual Intelligence can use both 2 digit & 3 digit ISO codes to map data. This helped to generate the SAP Visi choropleth maps and when filtered by region SAP Visi auto focused on the region in question, which helped in drilling down the data-set. The screen shot below shows a filtered data-set on Africa. I will come back to Africa later on. For the overall SDN points analyses I worked with an ISO 2 digit code for the geo-hierarchy. 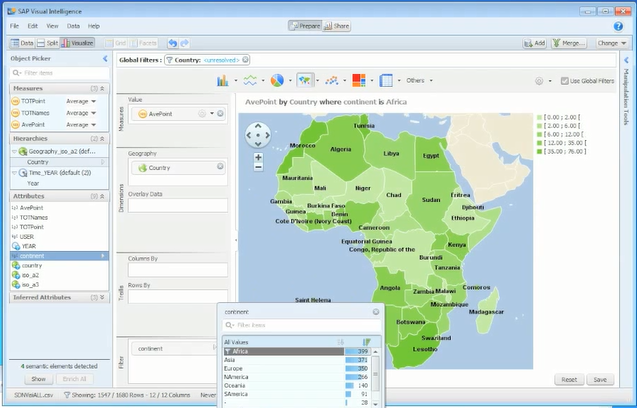 In my chosen category of average points per contributor over the range of data, then the winning country is – Belarus. Shown here with a tag cloud. The tag cloud is a feature I like in SAP Visi due to the impact (depending on the data set). 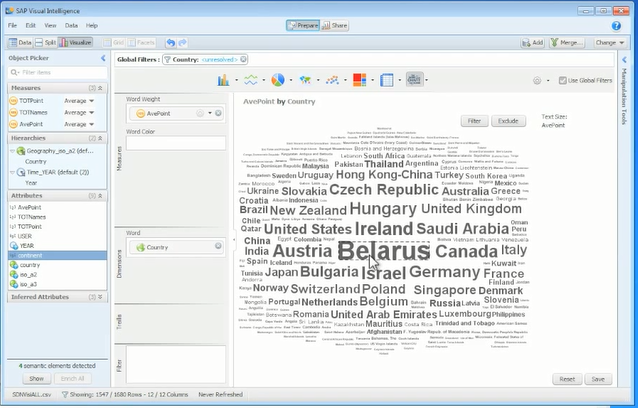 Credit where it’s due

India dominate number of users & total points for the data set. Shown here in a tag cloud for total points. 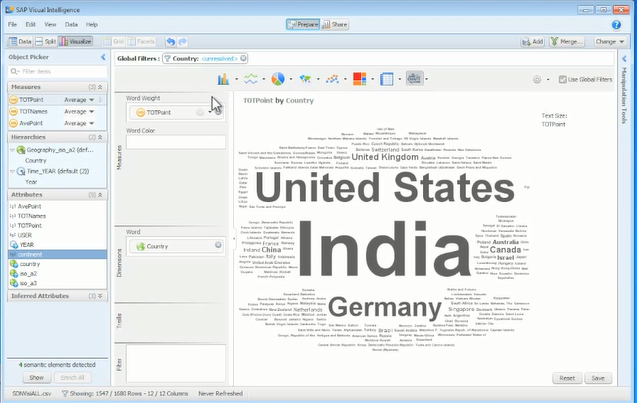 I did break down the data set into individual years but this time to check which years came out top. The bubble chart of SAP Visi was used to determine the top years for points and total number of contributors. 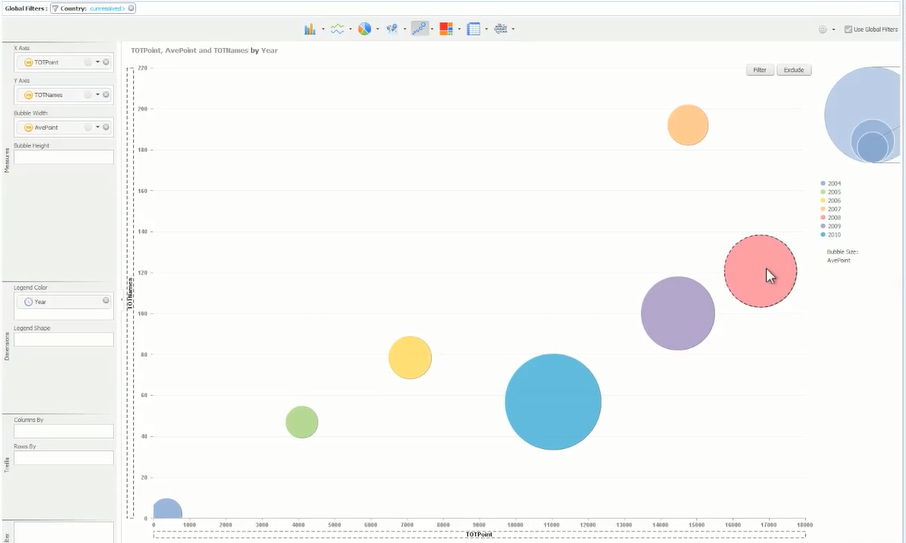 The chart shows 2008 as the year with the most points. As I am on SCN I thought I would do a search to see if I could possibly explain some reasons behind this year coming out on top.

Maybe due to the 2008 Points for Food program detailed here and the results detailed in this blog explain why so many points were achieved that year.

While making the video I did not want to feature any individual names, just the countries. As the video was going onto YouTube I thought it best just to feature the countries for the contributions. However here on SCN where the names are freely available in the search and it’s relevant to the site, the section on named contributions follows.

The screen shot shows which names appeared most in the dataset. A simple count of the names. Now these could be different people as only the top contributor is registered against one country per year, but some of the names I have heard of from SDN days. 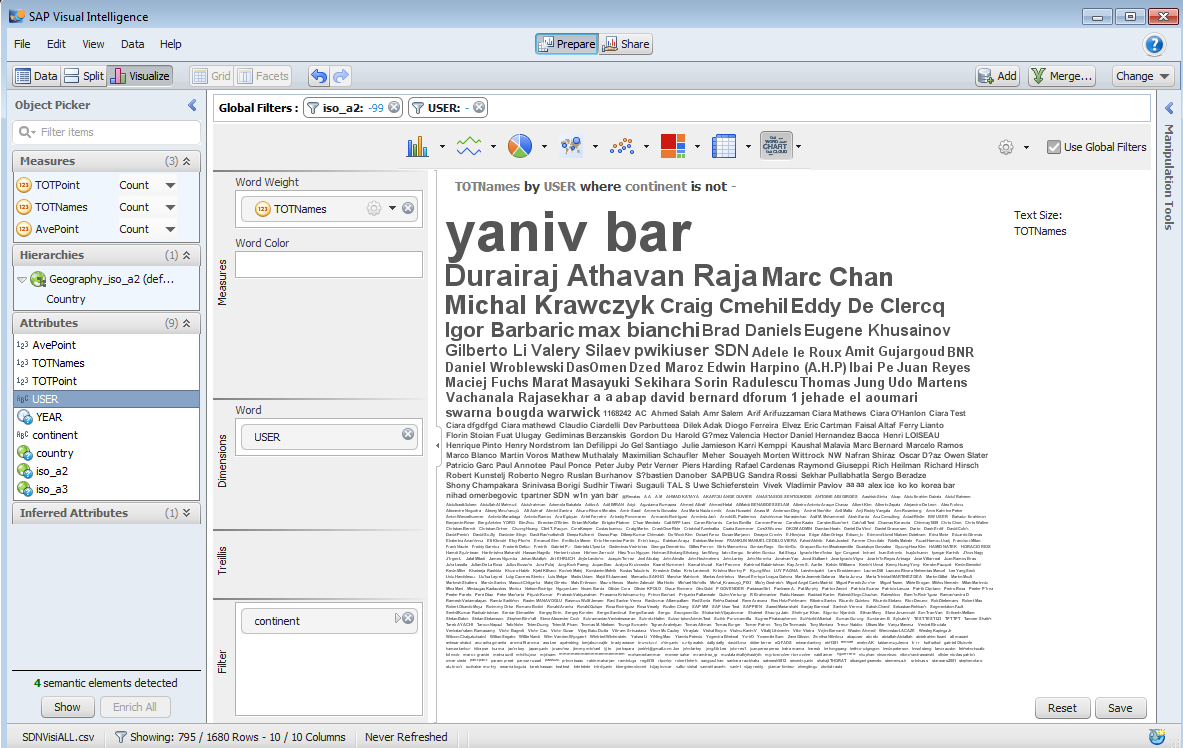 Yaniv’s name stood out, and checking the countries the name appears against did make me question the data. I liked the fact that SAP Visi highlighted the name and allowed me to ask more questions about the data. So again back to searching SCN for any answers to this.

Mr B. our man in Africa

Yanivs name was registered against many countries in Africa. Unfortunately time prevents me from fully checking out the details but I have commented on a blog from Yaniv Bar which may explain the situation. “SDN QA Team welcome you to the exciting world of test automation”. As I have power of edit on this blog if Yaniv replies to the blog from 2007 I will update later as my guess is test users against these counties.

I do not work for SAP or have access to the original data set any more, since the RSS feeds were for the old SDN site. However at the time I created the data I did some checks against the original official SAP RSS feeds and all these checks were valid.

Finally I would like to thank those involved in setting up the competition and appreciate the opportunity to use SAP software for free. Link to Other Data Geek Entry

Good luck in the contest!

Thanks for taking the time to comment and glad you enjoyed the trailer. Credit for that goes to iMovie template magic that made it easier to setup.

The contest is going elsewhere but I was not "in it to win it", just enjoyed getting involved in the contest and using SAP software.

And thanks to you for taking the time to create the SAP Visual Intelligence content on SCN, very useful for me in creating and updating SAP Visi.

Thank you so much! Nice blog.