In my previous blog post, I briefly introduced the BOPF framework and its positioning within the ABAP development landscape. With that information in tow, we’re now ready to begin peeling back the layers of the BOPF and seeing how all the pieces fit together from a technical perspective. In this blog post, we’ll get things started by taking a look at the design time aspects of business objects.

According to SAP’s BOPF Enhancement Workbench documentation, business objects within the BOPF are “a representation of a type of uniquely identifiable business entity described by a structural model and an internal process model.” This is to say that BOPF business objects:

In this regard, BOs in the BOPF are not unlike objects developed in other component architectures (e.g. EJBs in Java, Microsoft COM+, etc.).

Anatomy of a Business Object

From a modeling perspective, BOs are made up of several different types of entities:

The figure below illustrates how all of these entities fit together within a BO node definition. Here, I’ve pulled up a BO called /BOBF/DEMO_SALES_ORDER in Transaction /BOBF/CONF_UI. Here, the BO metadata is organized into several different panels: 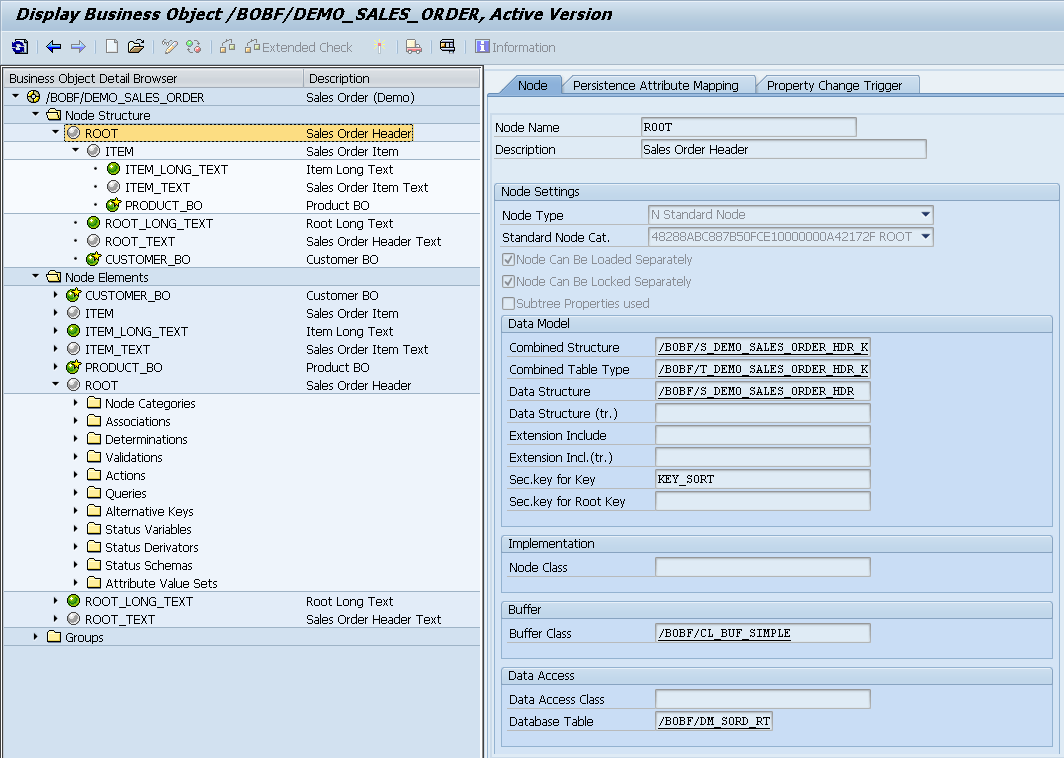 We’ll have an opportunity to get a little more hands on with these entities in upcoming blog entries. For now, our focus is on grasping how pieces fit together and where to go to find the information we need to get started with a BO.

At this point, you should have a decent feel for how BOs are modeled at design time. In my next blog, we’ll shift gears and begin manipulating BOs using the provided BOPF APIs. This will help put all of these entities into perspective.

It's (almost) true that Queries identify a set of instance of the node at which they are modeled, but: (as per contract) they only return persisted data!

As during transactional processing it can happen, that instances which shall be found have just been created during the session, queries should not be used while implementing transactional entities (such as determination, actions, validations).

If a collection of instances has to be identified which can't be resolved via associations, alternative keys allow a translation of semantical attributes to technical keys.

Now you are wondering how a key can translate to a collection of keys? The answer is in the non-uniqueness of the key. E. g. a purchasing group can be thought of identifying a set of purchasing documents. It thus acts as a non-unique alternative key.

P.s.:Excellent post, James! It's quite tricky to publish good non-redundant-content about BOPF after your series 🙂

I have some difficulties regarding the following statements, could you clarifiy these a bit?

Thanks for mentioning the non-unique alternative key to build up groups. So is it recommended to create groups by using the same GUID for an alternative group-key? or should the alt-key strictly be semantical in contrast to a purely technical GUID?

Regarding the first statement, what he's saying is that queries return a set of node rows for the node they're defined against. Here, you have to distinguish between the design time view of the BO model vs. the runtime view. At runtime, you can think of nodes as being rather like internal tables/containers which contain 0..n node rows. Queries fetch the node rows which match up with whatever query selection criteria specified.

The second point refers to the fact that queries are always performed against persistent data (i.e. node rows that have been persisted to the system database). With that in mind, he's saying that you wouldn't want to use a query to fetch the current state of a node within a transactional entity such as a determination or action. Why? Because there may be node rows existing in memory that wouldn't be accounted for in the query selection. For these kinds of tasks, we must use the BOPF API to fetch the complete set of node rows (in memory + persisted) and then filter the result set as needed based on our business requirements.

Does that help? Thanks. that did indeed help, thanks!

Can I have some information regarding the Configuration Object and how to create one...!

The Configuration Object is an object that allows us to introspect metadata about a business object. This object implements the /BOBF/IF_FRW_CONFIGURATION interface which defines lots of methods to find out information about a given BOPF node (e.g., its name, data structures, defined associations, queries, etc.). In some respects, it's analogous to the RTTI classes you might have worked with such as CL_ABAP_STRUCTDESCR. In essence, it tells you everything you need to know about a business object's makeup. This leads to lots of interesting dynamic programming possibilities.

Getting your hands on a Configuration Object is pretty straightforward:

Here, you need only pass in the business object key for whatever BO you're working with. This can be easily obtained using the SC_BO_KEY constant in the constants interface associated with your BO. Hope this helps.

Some how I am still not getting why would we need the configuration object. What is the use case?

And initially my assumptions were something like this. We use these configuration objects for maintaining customization, like how we maintain in SPRO. I thought this is something like that. (in BOPF world)

I still don't understand the option available in the BOBF to create BO of type Configuration Object.

I suppose this is not something you use every day. Where it really shows its value I think is in the development of frameworks. Some tangible examples of this include the FBI (FPM<->BOPF Integration) framework used to integrate the BOPF with FPM, integration of BOPF BOs in generic search screens or (POWL) work lists, BW extractors, etc. Here, I can build reusable components that can conceivably work with any BO provided the requirements aren't domain-specific.

Though it may not matter so much to end users, it matters a great deal to customers who invest in the BOPF because it makes the software much more flexible. For instance, if a customer has an FPM application built on the BOPF and they decide they want to move to an SAPUI5-based solution, nothing has to change at the model level. The customer just plugs in GBI (SAP Gateway<->BOPF Integration) and they're up and running. It's the BOPF's generalized API that makes this kind of portability possible.

No Still not.. As a developer I want to know the significance of having this option available. If this is something to be used internally then it should be some set of API's like what we have for the BRF+ with FDT classes.

I am able to create the BO of type configuration object. But I want to know how and where to use this particular type of BO. 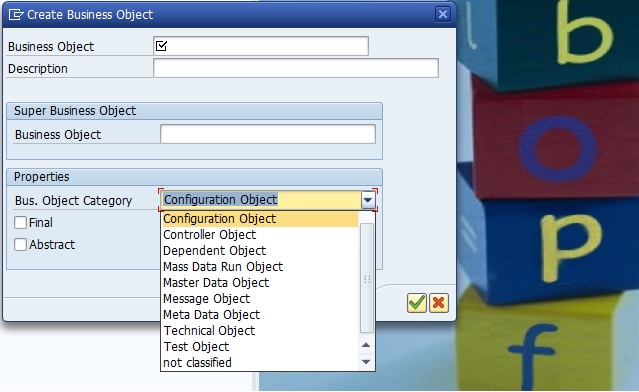 As this show different BO Types. I am interested to learn each one of these type.

OK, I'm with you now. What you've depicted above is different from what I'm describing - a case of SAP sort of mixing terms a little bit. The object I mentioned is also called the Configuration Object in some circles, so I didn't catch your meaning at first.

This category of BO is defined as part of the BO schema in the /BOBF/OBM_BO table, but I personally haven't seen this category used in any live SAP system. Therefore, I would defer to the SAP employees working this forum to comment further on this.

Ok, But to make you little more clear about what I am talking, I just added an IMAGE. 🙂

Yes I don't see any of the BO's in the system with this category. I really have to find someone to get the better information about it.

Could you please have a look at