Navigating the BOPF: Part 1 – Getting Started

Last year, I began working on a project which was rolling out the new SAP Environment Health and Safety Management (EHSM) module. This module utilizes some of the more cutting edge technologies in the ABAP space: Floorplan Manager, Web Dynpro ABAP, Adobe Interactive Forms, and so on. In addition to these standard technologies, EHSM also utilizes a technology framework that I had not encountered previously: the Business Object Processing Framework (or BOPF).

Whenever I started investigating the BOPF, the first place I went to look was naturally right here at the SDN. However, between SDN and Google, I found very little information to go on when it comes to working with the BOPF. Indeed, about the only useful documentation I found was an enhancement guide entitled BOPF Enhancement Workbench. What I was really looking for though was an in-depth description of the architecture of the BOPF, its API, and most importantly, some examples demonstrating its usage. Short of that, I was left to muddle my way through much of the SAP standard code until I began to understand how the different pieces fit together.

After working with the technology for the better part of a year, I thought I would launch a blog series documenting my findings for others who share a similar plight. This includes other EHSM developers as well as developers working in other new dimension modules such as SAP Transportation Management (TM), etc. I hope you will find it useful.

What is the BOPF?

As the name suggests, the BOPF provides a framework for working with business objects (BOs). This framework provides tools and services which span the entire BO lifecycle:

The figure below illustrates how these different pieces fit together within an application. As you can see, the BOPF architecture utilizes a layered approach: 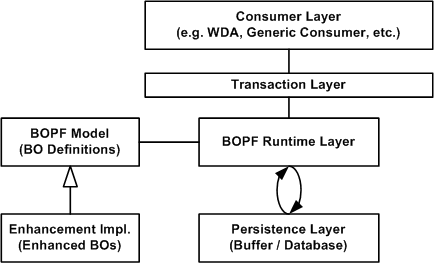 Why do we need the BOPF?

Whenever a new development framework comes out, it is only natural for developers to wonder if the framework is truly needed. Though I will not endeavor to sell anyone on the merits of the BOPF within this blog series, I think it is useful to compare and contrast the scope of a development project with and without the BOPF. Then, you can decide for yourself if the BOPF provides value.

To put this in perspective, let’s imagine that we’re tasked with developing a new module around some custom-defined business entity. A minimal bill of materials in terms of development objects for this module are as follows:

Now, in an an ideal world, we would attempt to encapsulate access to the entity data by creating a series of ABAP Object classes (e.g. entity classes and the like). These classes would offer basic CRUD (Create, Remove, Update, and Display) operations that provide users with a one-stop shop for accessing and updating the entity data.

With these basic components in place, we can then build the core application functionality. Here, we’ll find a number of producers/consumers of the entity data:

Overall, these kinds of development objects are pretty standard fare for the average ABAP developer. However, within the context of your typical SAP project, these tasks are often distributed across a large development team. Here, it can be difficult to enforce best practices and ensure that each developer accesses the entity data properly. Frequently, this is as a result of developers not understanding how to access the data via a custom API (provided there is one). In short, there’s no overarching object model which ensures that business objects are accessed consistently.

It is here that the BOPF shines. Within the BOPF, everything has its place. Business data is modeled consistently in BO nodes and attributes. Behaviors are defined as actions. Validations are performed automatically via validation modules. Triggers can be defined using determinations. The relationships between BOs is defined statically via associations. Once a developer becomes comfortable with the framework, the BOPF takes all of the guessing out of business object development. The BO encapsulates all of the functionality and provides consistent access to all of the producers/consumers outlined above.

In time, this sort of consistency can give rise to additional frameworks which sit on top of the BOPF. An example of this is the Floorplan Manager BOPF Integration (FBI) framework which simplifies the way that FPM feeder classes access BOPF nodes. Much of this will become clearer as we move on. For now, suffice it so say that the BOPF provides us with a tremendous springboard for developing business objects.

Now that you have a basic feel for what the BOPF is all about, we’ll move on to some more specific topics of interest. In my next blog, I’ll tackle BOs from a design perspective.

Congratulations on this excellent series on BOPF. We feel a bit ashamed not having delivered these informations by our own.

BOPF was an internal tool to ease and govern our application development. Last year we saw an increasing interest from partners and customers and we decided to open it also for customer usage. Not the /BOPF/CONF_UI transaction - good enough for internal usage - but the enriched enhancement workbench which we renamed to Business Object Builder (transaction BOB). This transaction can be used to create new BOs and enhance existing ones.

Always a bit slow, I'm just starting to explore the BOPF via your blog series. Thanks for taking the time to compile this, excellent job!

Excellent introduction into BOPF, I've shared this in my team and recommended it to anyone curious about this topic. Please, be so kind and continue writing articles about BOPF.

Thanks a lot for the detailed document.

Thanks for your inputs. I appreciate!!.

But a little mistake, the means of CRUD should be "Create, Retrieve, Update, Delete".

Excellent blog, Thanks a lot for sharing.

In 2022 I am working on EHSM implementation for a North American customer, and again reading through your BOPF material. The very first SAP press book I bought was also authored by you (ABAP Objects)  and the very first BOPF project (SolMan implementation), I did for a German customer in 2017-2018 was also after reading your blogs 🙂

These blogs are worth a book and should be preserved in SAP community as the definitive tutorial given there are no credible blogs like this and there are no SAP documentations worth mentioning.