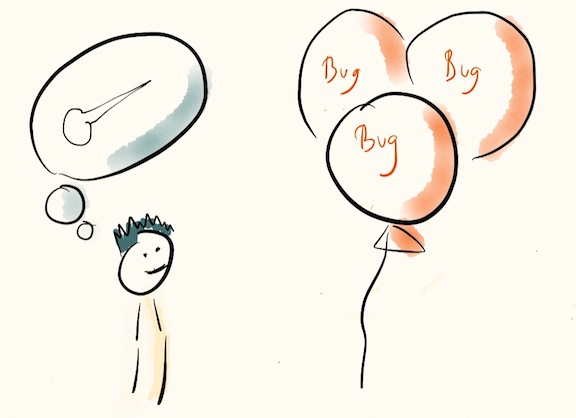 I love Testing, I love to deliver bug-free software and I love when Unit-Testing become more and more popular in the ABAP-World.

In my opinion more ABAP Developers should focus this year on Unit-Testing:

Skills for Developers to focus on in 2013

I loved the Blog which i´ve read today – http://www.techrepublic.com/blog/10things/10-skills-for-developers-to-focus-on-in-2013/3525 – More or less it´s say to me, that Unit-Testing is becoming for a Software Developer from a “Oh, that´s neat” to a best practice. It´s now a must have Requirement for Developer and my experience is, that more and more SAP-Projects expect this Requirement.

I can only give the quote of the Blog which i can only assist: “If you do not know how to do it, now is the time to learn.”

The really well programed BRFplus-Framework uses in great fashion ABAP Unit. It extend at some Points the ABAP Unit Framework and uses Testcases which could be stored (or better said inserted) into Databases zu Test the complete BRFplus Evironment. (see also http://scn.sap.com/thread/2122512 )

I think this is the way to go: use the existing Frameworks and extend it for your own context.

The ABAP TestCockpit not only support you as a Developer and a QA-Manager (see the Introduction of the new ABAP Assurance Quality Tool: http://scn.sap.com/docs/DOC-31773) it also uses ABAP Unit for the own Tests of the ABAP TestCockpit Framework.

Yes, that´s really interesing. Take a look at the SATC* Packages, It has a lot of ABAP Unit-Stuff and could be a true inspiration for cheating 😎

But more important is, use the existing SAP-Tools which really has impact on your Software Quality. And I bet that ABAP TestCockpit will become a great Player in this direction!

Win-Win Situation for Developers and Managers

I will tell you a story… My last project has the requirement to integrate a bunch of Rules in SAP-FI (Change  Chart of Accounts). The Requirements was for the Architecture-Team clear. Use BRFplus as the Rule-Engine and an well organized Software Architecture which could met new Requirements. It was soon clear that we have to use extensively Unit-Testing. So we Developed some fancy stuff in this Area and and Tested the Framework thoroughly.

What was the Result?

As the greatest and complex Component in this Project we succeeded to stay in time and budget!

One Day an Manager looked at me bewildered and say, that this Component was the only one which has the best robustness and the less software faults in all proceede Testing Phases (Component Tests, Functional-Tests, Integration-Tests)…

my only conclusion is: use more unit-Testing to create your own Win-Win Situations!

I love that Unit-Testing is more and more recognized as an must have Requirement – So give it a try!

Your "win-win" example does inspire me to learn ABAP Unit-testing. It has been on my to-do for quite sometime & have been postposing it. May be 2013 is the year i finally get to learn it.

I think also this is a really good Inspiration and you will not only enjoy the unit-testing...

you will also enjoy your trust in your delivered software 🙂

I wish you have fun with starting unit-testing!