SAP NetWeaver Cloud Labs: A look into the rear mirror and a glimpse into 2013

By the end of the year, the SAP NetWeaver Cloud Labs ‘plane’ will be three months old, a good time to look into the ‘rear mirror’ and also to catch a glimpse of its future flight schedule. So let’s see what happened in 2012 and what exciting ‘stops’ are planned for 2013. 😉

Since becoming publicly available, the add-ons have gained quite a bit of momentum and have received lots of exciting community feedback: 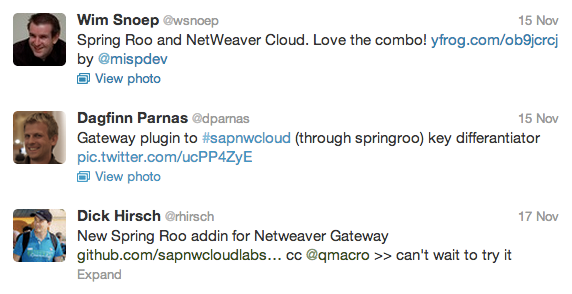 Several SAP community members started playing with the add-ons almost immediately and deployed their first spring-roo-powered application within minutes. For instance, it took Richard Hirsch less then a day after the release to build his first application and to deploy it. That’s impressive. It looks like that the two add-ons have the potential to become a ‘community-driven component’ for SAP NetWeaver Cloud. Since they’re licensed under Apache 2.0, everybody can openly participate; so, when will you join?

After looking into the ‘rear mirror’, let’s also catch a glimpse of the future flight schedule. For 2013, two cool ‘stops’ are already scheduled: (1) Rapid Application Development (RAD) for SAP NetWeaver Cloud, and (2) the Operations Cockpit (OpsCockpit).

If you want to learn more in the meantime, watch Wolfgang Karl Rainer Schwach‘s presentation at the SAP Inside Track Netherlands 2012, and/or drop the guys a message.

It was a very exciting year for SAP NetWeaver Cloud Labs, with many more great things to come in 2013. Now, it’s your turn. Tell us what you expect from SAP NetWeaver Cloud Labs in 2013. What do you like and what should be changed? What pieces of luggage (not only related to RAD) do you want to see? How can we make your ‘onboarding’ easier and help you bring your luggage on board? Just post a comment, and Matthias Steiner and/or I will help you to get it of the ground…