Nowadays, when mobile version of corporate web application is not something esoteric, but a must requirement for every app that claims to be successful, a lot of buzz is about modern and fancy web technologies like HTML5 and CSS3. SAP as one of the market leaders is not going to stand out of track and proactively contributes to mobile web development. However, rapidly growing client-side development brings it’s own challenges, that not only the corporate, but common developers as myself should deal with.

When I start to work on a new project, I prefer to spend some time to set up development environment to make it more convenient and develop with pleasure. The most common issue that majority of client-side developers are dealing with is that modifying static resources that are not to be compiled, but do part of some deployable unit of complex web application like SAP Enterprise Portal, requires compilation of the whole deployable unit and its deployment to target web container as well. And this is absolutely not acceptable process for rapid development, when almost each row of code should be checked on the fly in the browser. There are several technics of how to avoid annoying compile & deploy cycles during the work on Java Script and CSS. In this post I’m going to describe one of them that I’m using in my day-to-day work. Besides of it I will explain how to perform merges of static resources and compile LESS files to CSS on the fly.

The first thing that is need to be done is to understand how the static resources will be delivered to the browser from different place without performing any changes in the web application or its web container configuration. The following sequence diagram explains how it will be done.

The flow is as follows:

There are a lot of implementations of proxy server, but I personally prefer to work with Apache httpd server. It is relatively small and simple to use, it may be deployed almost on every platform and it supports many additional modules. Binaries may be downloaded from http://httpd.apache.org/download.cgi. For Windows users installing Apache httpd is as simple as just download it and follow the installation steps for typical installation. Mac users may enjoy preinstalled Apache httpd server (just enable web sharing in system preferencies). Once it is installed and running (by default it starts automatically as a service) you can configure it to work as a proxy server. In order to do so the httpd.conf file should be updated as follows:

Note: for Windows users httpd.conf is located somewhere like:

Replace all placeholders with actual names, paths and IPs. If proxy is configured correctly it is possible to access proxy server as original application and receive dynamic content. For example if only CSS folder is configured as static folder, than it will be possible to see all the pages, but without any styling (since local server is not configured yet). By performing this step all steps of the flow except #7 are enabled.

Apache httpd server may be used as local web server as well. It should be installed on the machine where the static resources are edited and configured to respond using these static resources. In order to do so the httpd.conf file section <IfModule alias_module> should be updated as follows:

Replace all placeholders with actual names, paths and IPs. This step enables #7 from the flow. Since it is done the whole flow should work and it is possible to access application via proxy server URL.

On The Fly Merges And LESS to CSS Compilation

Another problem that developer may deal with is that most modern web applications are optimizing the text based static resources and perform some preprocessing on them before they are delivered. For example Java Scripts used on the same page may be merged into single Java Script file in order to avoid multiple round-trips and adjust the performance; LESS files may be used for styling and processed with LESS compiler in order to generate CSS files at the build time. Since all these optimizations are done, browser is no longer work with original source files of static resources, but with optimized resources. However, developer is still working with source files and wants someone to perform these optimizations on the fly. This is still possible using the environment described before, but with several adjustments.

First thing that is needed is some scripting language that will allow performing manipulations with files located in the file system. I personally prefer PHP, because of its simplicity and integration with Apache httpd. The examples of the sections below will be provided using PHP. In order to enable PHP in Apache on Windows the following things should be done:

In order to check PHP is working, create index.php file in the local web server documents root (on Windows it is something like “C:\Program Files (x86)\Apache Software Foundation\Apache2.2\htdocs\”) and place the following lines:

If there were other files in the document root, they may be removed. Now when local server will be accessed (http://localhost/index.php), it will display page that looks like that: 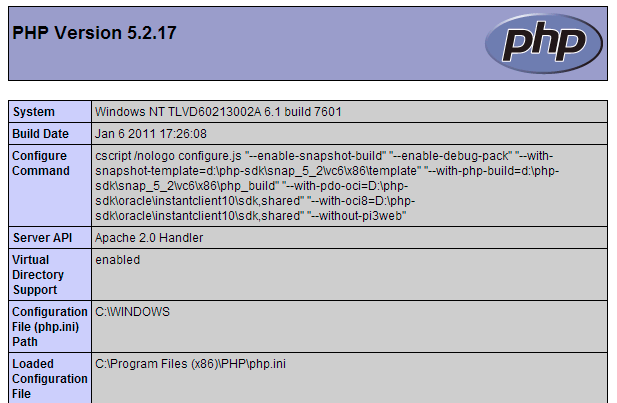 Now when PHP is installed and Apache httpd is configured let us see how it may be useful.

Since PHP has an access to the file system it may be used to merge files on the fly. This is useful when in design time there are several Java Script files that are merged to during the build and loaded as single file by client-side at runtime. In order to achieve this goal proxy server should be configured to pass some requests to relevant PHP scripts instead of static resources. Besides of it there should be the PHP script that performs the merge.

Note: the order is important since it defines the priority and the first match will take effect.

Note: if there are several merged files the configuration and merging script should be cloned since each merged file contains different list of resources it is merging.

After this step is done it will be possible to access proxy server with path to merged file and receive it as output of relevant merging PHP script on local web server. This allows the developer to continue working on separate files an leverage them as a single compressed one. The changes taking effect on the fly.

Compilation of LESS files to CSS may be performed using PHP as well. The Rewrite module of Apache httpd will be utilized to make the process more generic. The following actions should be performed with local web server:

Note: provided script is just an example that may be easily modified to working code (don’t forget to replace placeholders with actual data).

When everything is done it will be possible to access proxy server with path to CSS file and receive it as output of compilation script located on local web server. This allows the developer to continue working with LESS files and don’t worry about compilation.

It took me about half a day to configure the environment at the first day, but I’m enjoying the benefits of it every day, because it saves up to 80% of time that was spent for redundant compilation and deployment and I can access the application from my mobile device that will load static resources directly from my IDE. Recently I need to modify configuration to add another one application I’m working on, but these are minor changes that follow the same pattern.