With the news that two Rugged Mobile suppliers are to merge and Intermec to be acquired by Honeywell, there appears to be a shakeup happening in this market. This follows the summer news of Motorola solutions.(Symbol Technologies) buying Psion which indicates that Rugged Mobile manufacturers have reached a cross-roads with a slow down predicted for 2013. What we are witnessing is a consolidation trend with increased market erosion by the consumer smartphone manufacturers.

The second interesting change will be that of Operating system. Currently most Rugged Mobile devices choose either Microsoft Windows Mobile 6.1 / 6.5 or Microsoft Embedded 6 as their OS of choice. There is still some following of Palm OS as well as some new devices running Android 2. However in 2013 there will I predict be a move to Android 4 OS and at the same time a move to Microsoft Embedded 8. Indeed some devices already allow you to run either the Android or Microsoft OS. The battle lines are drawn, I hope to track this battle over the following year in my Document: Rugged Mobile Devices

So how does that leave the market share for the rugged Mobile suppliers. 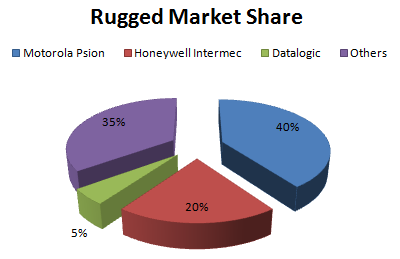