InnoJam – Techies only? Certainly not!

I participated in this year’s InnoJam at TechEd Madrid 2012, almost by mistake and had the fantastic experience of winning too. As a non-techy person coming from Presales, I would like to share this 30 hours extraordinary mind blowing experience with you.

SAP TechEd Madrid InnoJam 2012 opened its doors at Sunday at 10AM before SAPPHIRE. I showed up, as my Boss though it was an excellent opportunity for me to participate in.

Frankly, I did not know what to expect. Had never heard of InnoJam. But as the room fills with techies, hackers and developers my smile and courage slowly start to fade away. Reading the detailed agenda for comfort – 00.00 AM to 3.00 PM: Coding, Coding and More Coding, had the opposite effect. I wanted to leave, running. A shaking SMS is send to my boss asking if he has ANY idea what he signed me up for as I can’t CODE! But I stay. Ahead of me lies 32-hours non-stop design and coding competition. I finally got it!

9 teams where formed. I chose the topic “Neighbourhood Care” feeling it narrowly relating to my working space CRM at SAP and joined forces with people I had never met before to design, code and demo a working prototype over the next two days and one night on the theme “Better Cities – Better Lives”. Backed up by SAP Guru tech experts, Design Thinking coaches and SAP mentors, as well as tech experts from event partners Microsoft (with Windows 8 tablets!) and RIM (with BlackBerry tablets!). The winning team would not only receive the very coveted SAP InnoJam winner shirts, but would also present their demo on stage in front on thousands of TechEd attendees on Tuesday evening as part of TechEd DemoJam.

New to InnoJam this year was the Design Thinking.  After all teams where formed, clock counting down, the Design Thinking process under the guidance of Design Thinking coaches could start. Interviews, synthesized insights, brainstormed possible solutions was conducted and after all eventually built a low-fidelity prototype. So even though I could not code, I could for now bring value to the design process. Our team came up with a mobile and cloud application for managing a private social neighbourhood ecosystem. Thanks to the neighbours interaction center, neighbours can help each-other with everyday tasks such as car pooling, babysitting, planning playmates and other social activities such as a local community barbecue. We called it WeCare.  Time for coding and time for me to step back! Quickly is was decided to go with HANA, NetWeaver Cloud Portal and BlackBerry Playbook. “Who knows Java?” “HTML5?” – certainly not me. But I could design and secure content. I was not completely without work….and get coffee during the late hours of the night. So the WeCare Solution was created during the next 20 hours. What an achievement. Felt exactly like being in High School again!

30 hours after we set out we presented our running solution for the judges and WON. The judges’ comments were that we had a complete solution. Being a diverse team with techies and non-techies, we managed to create a complete solution that was both business viable and technology feasible. It had been some emotional hours for me – from wanting to run screaming away, to standing on the stage as a Winner of InnoJam 2012 with 8 people that I now had tremendous respect for and will keep a close connection too. Mission accomplished and I now received a very bold SMS from my boss: “Now you see why I sent you?”

So next was ‘the big’ stage and DemoJam. 6 hours before actual live presentation, me and Ole, my co-presenter from our partner EVRY, was wired up for testing, coaching and rehearsal. A bit of nerves and little sleep during several days was starting to show…We did not win DemoJam – a wow presentation and solution that had taken one year to build did. But I am proud to have presented on behalf of our team WeCare, a solution build in 30 hours and that did not exist 48 hours before we went on stage. 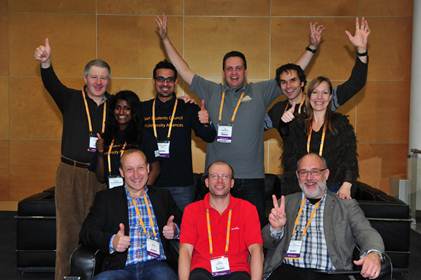 Congrats again for winning innojam (and even more for overcoming your fears 🙂 ). You're right: innojam isn't only for techies, and the fun thing is: the more non-techies participate, the more value there is for all of us (and yes, I'm a techie)!

Thanks for writing down your experiences, and no, I couldn't see any nerves at Demojam 🙂 .