It all started when we saw an ambulance struck in traffic It actually took 5 minutes for the traffic inspector to realize the situation and to take appropriate action to turn the signal green for ambulance.

You can guess what a typical software developer + diehard movie fan can think of !!!“how about a system that could track the emergency vehicles and control the traffic signals?”
Well in western countries we do have separate lanes for emergency vehicles like ambulances but its little tough in developing countries due to narrow roads,
So we started with this idea named “SAP freeway” which helps in providing the free way to emergency vehicle like an ambulance. 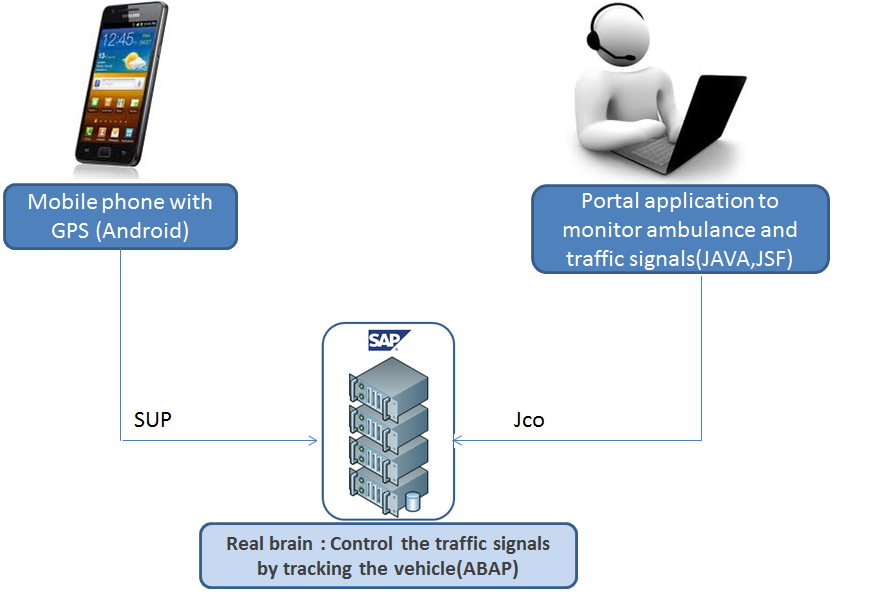 As apparent in the Design “SAP Freeway” has three parts.

1.Android application which would be used by ambulance driver to submit the Freeway request.

(You can use App inventor to know how to create easy android application at rocket speed http://beta.appinventor.mit.edu/ But it’s difficult in case you want to use connect it with SAP via SUP. Hence, we used eclipse development tool for developing an android application for the driver of the vehicle) 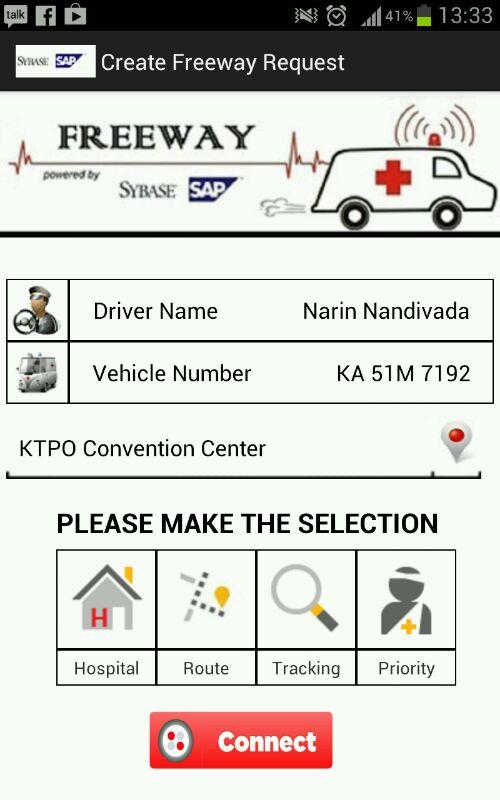 2. SAP backed algorithm to handle freeway request and turn on/off particular traffic signal status based on the distance of the ambulance and traffic signal. It also consider the real time traffic information to take appropriate decision for suggesting the routs(Pure ABAP )

3. Portal application with java connections(Jco) which could read the current location of the emergency vehicle as well as the status of the traffic signals (green/red) and plot it in Google maps (2D) and Google earth(This would be used by the Traffic control room) 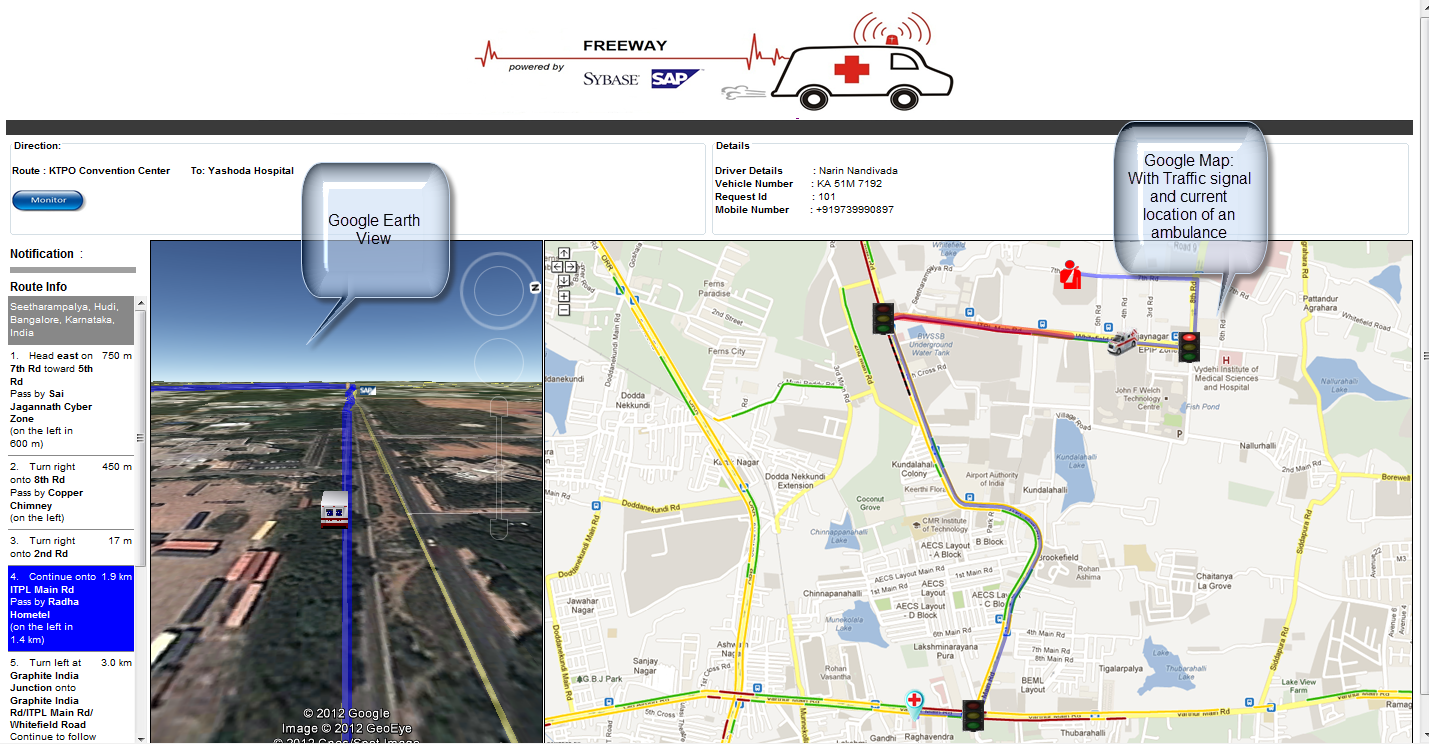 We prepared a video depicting the functioning of SAP Freeway and submitted the design as a contestant for Demojam Bangalore.
After few days result were out with the finalist of SAP Teched Bangalore and “SAP Freeway “ was selected.
But I was in dilemma whether to be happy or  sad As I was sure If I start preparing for Teched Demojam…I am going to spend all coming weekend in office with “SAP Freeway” and would be missing my coffee talks , movies , long drives and parties. 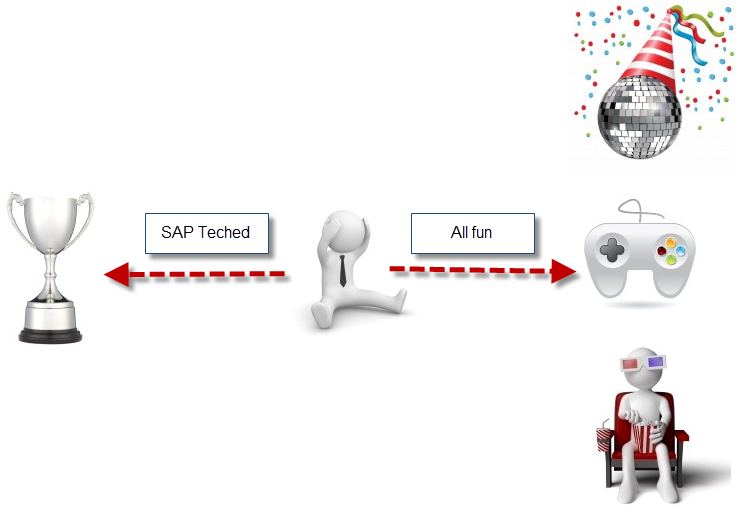 After few fights (you can guess with whom!!) I was allowed to Spend 2 months completely in office with “SAP Freeway” with my team Trinoy, Tanushree and Narin.
Initially we thought that we would demonstrate in real time by mounting a camera over the vehicle and would keep the dummy traffic signals on the road. However, it was very complicated to wrap up that demo in 6 minutes, in that case. Hence, we came up with “SAP streetView board”.

SAP StreetView Board:  A model ( 5 feet X 7 feet ) with the predefined path from KTPO to Yashoda hospital (in Bangalore) ( as shown in the 2D map ) with real traffic signals, was prepared.
With lots of engineering we somehow managed to make a big board using thermocol sheets and wooden sticks to support it.

Then the tough part was how to track the toy car which was moving on a small board, as it was next to impossible for GPS to help out on such a small board. 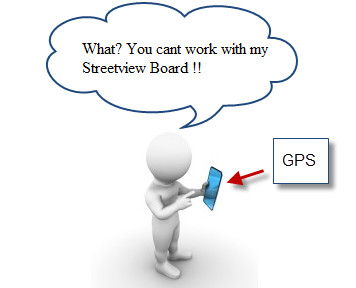 Then the Einstein in us woke up thinking about all the possible option to track it.Starting from “Placing a marker image on top of the toy car with camera mounted on top of the board and using image processing to figure out where the toy car is?” to” Measuring the rotation of the wheels of car that how much distance it moved.”

But As I always say “Every Difficult problem has easy solution, You just need to think bit different”
And the solution was proximity sensor. We kept the android phone on the ambulance and mounted few street lights on the board, So whenever an ambulance passes below the street light. It sends the GPS co-ordinates to the SAP backend using SUP (Sybase unwired platform).

We prepared a predefined route and based on that we wrote an android code to send the GPS co-ordinates to SAP backend.

We placed our model on the Demojam stage and were all set to put 3 months of hard work infront of 12000 techies in 6 mins.
http://www.sapvirtualevents.com/teched/sessiondetails.aspx?sId=4143
Demo went good and it was the final countdown when winners were going to be announced and it was SAP Freeway. I would say it was the best birthday Gift to myself. Holding the Teched demo jam winner’s trophy was an awesome experience.

Last but not the least, it was an honor to get interviewed by SAP research manager Kowalkiewicz, Marek .