SAP Inside Track India 2012 – The After Report

When we started planning for SAP Inside Track India event this year, we were a bit skeptical at first whether we’ll be able to successfully make it, given the initial response and support was low from the local community members. Initially we were planning to organize it in Bengaluru and Kolkata like last year, but when Vinoda Macha from Hyderabad and Satheeshkumar Dhandapani from Chennai contacted me expressing their interest to organize the event in their respective cities as well, I was really charmed. None of them are SAP Mentors, but are excellent examples of enthusiastic SAP Community members who took their own  initiatives to organize SIT events. Though seemed a challenging task and very unique, we decided to host the event simultaneously in all four cities of India on the same day Dec 8, 2012. Though later due to logistics issues Bengaluru and Chennai decided to have the event on Dec 15 and Hyderabad and Kolkata had it on Dec 8. The next few weeks past in a whiz planning the granular details of the event, collecting sessions proposals and calling for sign-ups. Though Hyderabad got an amazing number of registrations and sessions proposals, slowly the other locations also got the required number of session proposals and sign-ups.

Unfortunately though we saw a drop in actual number of participants in all the events on the day of the event than what were expected from the sign-ups. In this regard I remembered one of the tweets from fellow SAP Mentor Martin Gillet as below and later realized how true it is 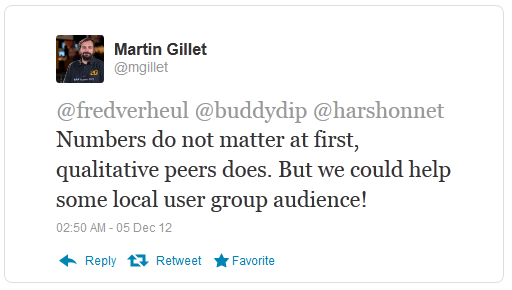 I was physically present at the SIT Kolkata event on Dec 8, which started off with 15 participants, but always remained very interactive, fun and great learning experience for everyone though-out the day. Due to the interactive discussions and Q&A along with the sessions, we were running late than the schedule by almost an hour. So the last session on SAP HANA by Ranajay Mukherjee started at 5 pm though as per the schedule the event was supposed to end by then. But each one of the participants were still very much keen to listen to Ranajay and asked questions and had discussions thoughout his presentation, making it a very lively one. The interest level of the participants was so much that when Ranajay asked them whether they want him to go through some backup slides on use cases everyone said yes. Point to be noted that it was 5:45 pm on Saturday evening (almost an hour late than schedule end of event) and only 15 people in a lonely office building listening to the presenter in rapt attention and asking questions and to share more. Very naturally Ranajay’s session on SAP HANA along with the SAP Transportation Management Overview session by Sangeeth Parvatam were voted as the best two sessions of the day, who won SAP Press e-book of the choice sponsored by SAP Press. There were also some great sessions by Tathagata Samanta on Vendor Management Inventory, SAP Process Orchestration Overview by Shiladitya Sarkar and Himadri Chakraborty, SAP Landscape Optimization by Koustav Biswas, and a remote session by fellow SAP Mentor from Australia by Graham Robinson. Unfortunately due to technical glitches we were not able to record the sessions, but it was the local participants who anyway got the worth of attending the event.

It is really true, as I realized that the key to organizing a successful SAP Inside Track event is to find the small but genuinely interested group of people from the local SAP Community and result is very enriching.

Koustav Biswas clicked some great snaps of the event and posted them in SIT Kolkata 2012 photo album in the Facebook group for SIT India. I am looking forward to the other organizers and participants of the SIT events in Kolkata, Hyderabad, Bengaluru and Chennai also to share their experience and views of the event.