What Happens When People Are the Most Important Part of Technology 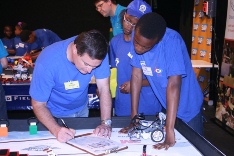 There’s a lot of hand-wringing about the worldwide shortage of math and science experts. Sci-Bono is doing something about it in a big way.

Imagine a classroom filled with children who come from neighborhoods where the unemployment rate is upwards of 80%, poverty is the norm, and necessities like running water and food are not a given. Technologies such as computers or mobile devices, if they do exist, are obsolete. Even if they are present, teachers often lack the skills to understand how to use them. This is the situation that typifies the disadvantaged South Africa communities where Sci-Bono operates. As the country’s largest science center, Sci-Bono is also part of the provincial education department delivering science, math, technology and technical education across the school system for grades three to twelve. The center sponsors approximately 30 programs that educate and train over a quarter million students and teachers each year. With funding from corporate sponsors that include SAP, Sci-Bono has developed partnerships that literally change people’s lives.

Getting things done is not just about writing a check. Kramer thinks that the hands-on support SAP employees and families provide to Sci-Bono during staff days is just as important, maybe more so. “We’re all about people. Each person from SAP who helps paint, garden, or even work with the orphans who visit the centers is a positive role model for these kids who are living in places with 70 to 80% unemployment rates,” says Kramer.

Sci-Bono began working with SAP several years ago when the organization became involved with the FIRST Lego League. This international robotics tournament challenges participants to build a robot to defined specifications. Historically popular with schools in only affluent South African communities, the competition now includes more entries from students in disadvantaged communities. Sci-Bono provides participants with transportation to and from the science centers where they can work on their entries, along with hardware and software, and team mentors who coach participants through the entire competitive process.

Kramer’s organization can be seen as an antidote to poverty and the apathy that accompanies it. But he remains humble despite Sci-Bono’s obvious achievements. “It’s not us that’s making a difference. It’s the fact that there’s something happening. By rolling up our sleeves and saying we’re here to help you, generally we see an improvement in those schools.”