SAP Business Objects Data Services (DS) does not provide the functionality to concatenate multiple row entries into a single row, where the number of rows that might appear is undefined.

The Data Services have the functionality to concatenate multiple rows into a single row entry using the reverse pivot transform and then concatenating the columns provided that the number of rows that need to be concatenated is pre- defined or fixed.

If the number of rows that might appear which needs to be concatenated is not defined then the same functionality can be achieved at the database level through SQL using the XML functions. The XML functions XMLAGG and XMLELEMENT are used to concatenate the multiple entry rows into a single row. XMLELEMENT will take an element name for identifier and returns an instance of XML type. While XMLAGG takes a collection of XML fragments and returns an aggregated XML document. E.g.(xmlagg(xmlelement(e,<column_to_be_concat>,’,’).extract (‘//text()’)),'<delimiter>’)

A DS Custom Function can be used to concatenate the multiple rows into a single row even when the number of row sets that might appear for a set is not defined.

The source table has four columns namely unique_id, name, Text and Note_seq_num. The source information has the data set like

For each of the distinct Unique_id and name we should have only a single entry in the Target table and the Text column should be concatenated. The Note_seq_num column is used as reference column to identify the set of rows that needs to be concatenated based on the corresponding unique_id and Name.

The Custom function uses the column Unique_id (the primary column based on which the row are to be concatenated) and the Note_seq_num. 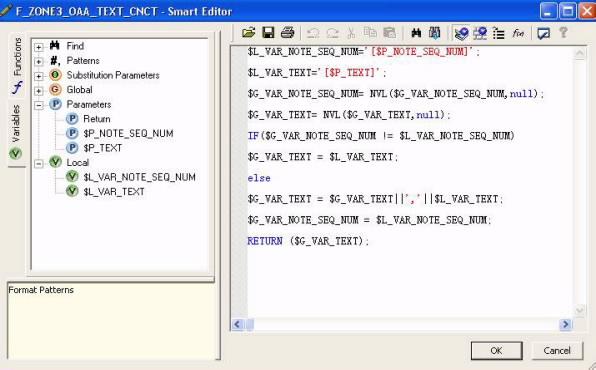 After the execution of the custom function, the output would be as shown below:

The resultant output can be obtained by grouping the records based on unique_id and Name and by getting the Max of Text column.